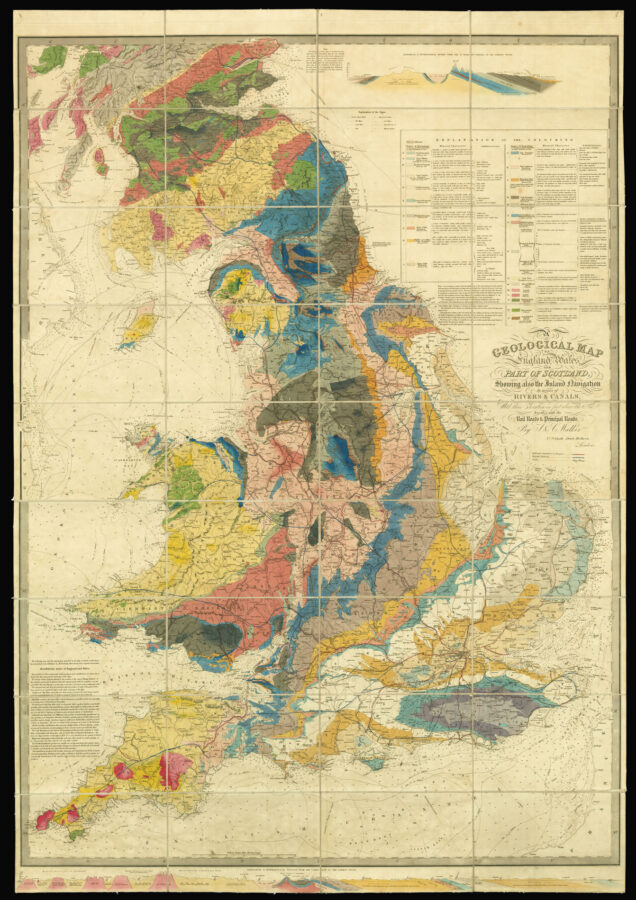 Geological map of England and Wales

A Geological Map of England and Wales, and Part of Scotland Showing also the Inland Navigation By means of Rivers and Canals with their elevation in feet above the sea together with the Rail Roads and Principal Roads.

First published by James Knipe in conjunction with John Walker and Charles Walker, leading London engravers and publishers, in 1835. In this later printing Knipe’s name has been been removed from the title, leaving the credit only to the Walkers. This was due to the fact that Knipe issued a similar geological map under his own name alone in the same year.

State 3: the map has been heavily re-engraved. The original title has been erased and re-engraved in the north sea, together with a key to the railways and canals. Above the title the explanation of the colouring has been re-engraved, with the map now extending as far as Forfar. Along the lower border is a geological section from ​‘Lands End to the German Sea’ (North Sea) and St. George’s Channel to the German Sea, with an extensive colour key, ​‘Explanation of the Colouring’, ​‘Explanation of the Signs’ and, acknowledging the times the map was engraved in, a key to ​‘Railways Completed or in Progress’ and ​‘Projected Railways.