Gauld’s chart of the Coast of West Florida

An Accurate Chart of the Coast of West Florida, and the Coast of Louisiana From Sawaney River, on the West Coast of East Florida, to 94° 20′ West Longitude. Describing the Entrance of the River Mississippi, Bay of Mobile, Pensacola Harbour, &c… Under the Direction of the Right Honourable The Lords Commissioners of the Admiralty.

Gauld’s extensive and detailed survey of the Gulf coast, from the Sabine Lake in the west to past the ​‘Mouths of the Amasura’ in the east, and inland along the Mississippi to ​‘Brown’s Cliffs’ and the mouth of the La Fausse Riviere. An inset of the ​‘Continuation of the Coast from Bluff Island’ appears upper right.

George Gauld (1732–1782) was a Scottish military surveyor working for the British Admiralty. From 1764 to 1781 he charted the difficult waters off the Gulf Coast of West Florida. Some of his surveys were published by J.F.W. Des Barres in the Atlantic Neptune, but the continuation of his work was hampered during the Revolutionary War due to the depredations of American privateers, and was taken prisoner at the siege of Pensacola in 1781. He was then taken to Havana, and released to New York, before being sent to England, where he died shortly afterwards aged fifty in 1782, but his own writing ​‘An Account of the Surveys of Florida, &c,’ and smaller chart ​‘A General Chart to accompany Mr. Gauld’s Surveys of the Florida Keys &c.’ were not printed until 1790 by William Faden.

Faden first issued Gauld’s chart, in large format in February 1803, in a very limited number, with only 4 institutional examples recorded worldwide. The Admiralty re-printed the chart (524), as here, with significant ​‘cultural’ updates, prepared by Faden in 1820.

Rare. Known in only two institutional examples: at the LOC, and at the Bibliothèque et Archives nationales du Québec.

1. With penciled annotations dated 1839, and noting, in particular, the latitude and longitude of the Mobile lighthouse from G.W. Blunt’s chart. 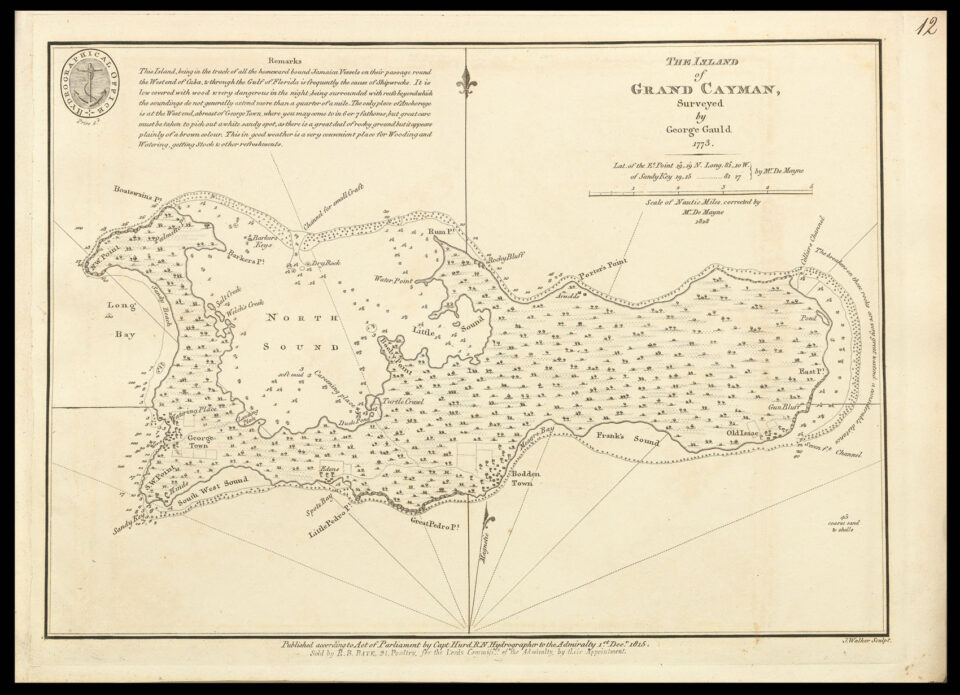