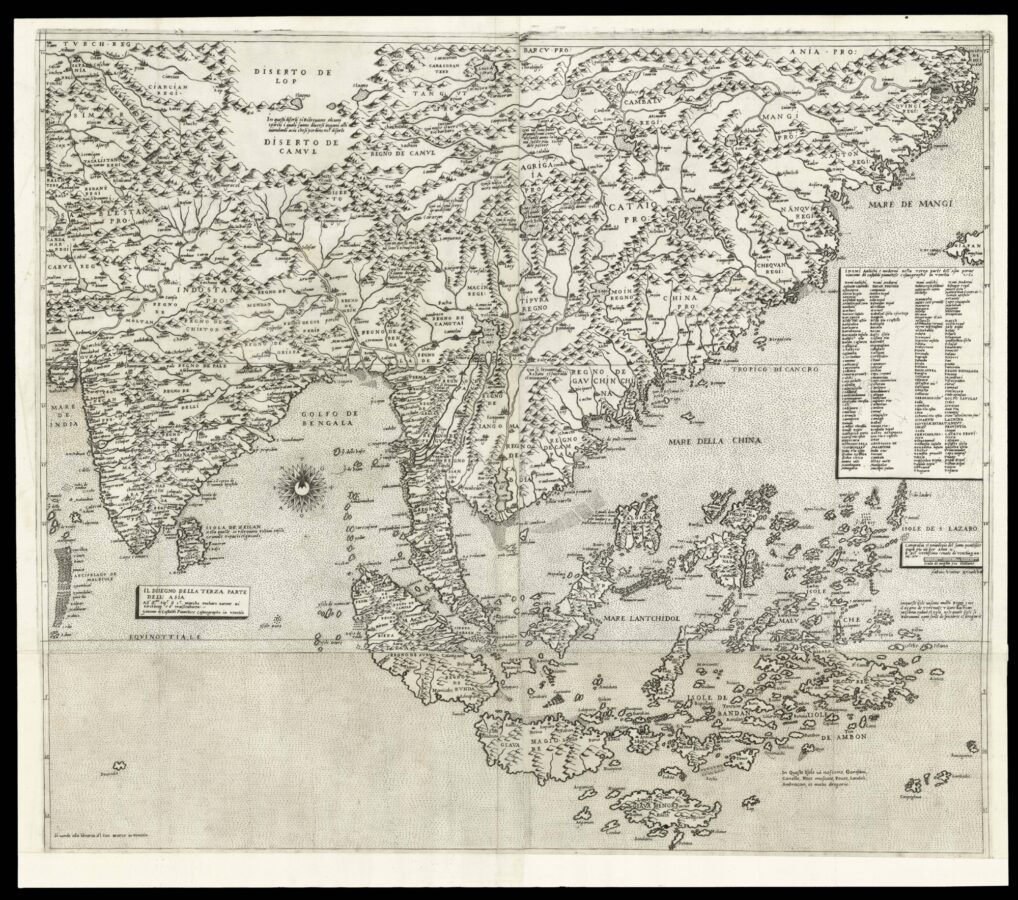 A fine example of Gastaldi’s map Southeast Asia, the most influential map of the region published in the sixteenth century, and the first map to name Singapore; here present with the rare southern extension sheet, incorporating the Java and the lucrative Spice Islands.

Giacomo Gastaldi (c1500-1567), originally from Piedmont, established himself as a cartographer in Venice, where he was given the notable title of ​‘Cosmographer to the Republic’. He was a prolific mapmaker, with a body of work numbering at least 109 pieces, including contributions to the 1548 Venice edition of Ptolemy’s ​‘Geogra a’, and Ramusio’s ​‘Navigationi et viaggi’. Gastaldi’s maps of Asia are considered amongst the most significant representations of the continent, as the first pieces of cartography to name, and even show, many of the areas depicted. Originating from Venice, they also reflect the Republic’s dominance of early exploration, particularly in Asia. The city’s crucial position allowed for Western contact with the East, although this relationship was becoming progressively threatened by the expansion of the Ottoman Empire.

The present map bears the same scale bar as Gastaldi’s first and second parts of Asia, and matches with their latitudes and longitudes. It has been dubbed the most influential map of the region published in the sixteenth century and, as noted by Schilder, ​‘in the representation of the coastlines, his maps are superior to all previous known maps of Asia, either drawn by hand or printed’. After Gastaldi’s death, it was augmented by two further sheets, as in the present example, narrower in size, and with the imprint ​‘To be sold at the San Marco bookshop in Venice’ (transl.).

The map extends from central Asia to China and is particularly important for its depiction of the islands below the Equator. Alongside the Moluccas, labelled the ​“Isole di Ambon”, Gastaldi includes a note explaining that ​“in these islands there are cloves, cinnamon, nutmeg, pepper, sandalwood, ambergris, and many spices” (transl.), reflecting the importance of these resources to Venetian trade. e Philippines appear as ​“Philippina” and Borneo in its present nomenclature; found below these is Java, labelled ​“Giava Magiore” to distinguish it from the fictitious ​“Giava Minore” added by Forlani. Significantly, this is the first map to name Singapore and Cambodia.

Gastaldi’s sources vary from Venetian explorers, such as Marco Polo and Pigafetta, to the records of Spanish and Portuguese voyages, most notably that of Magellan. As noted by Nordenskjöld, it is likely that he had access to the extensive library of the Fugger family, since Marcus Fugger was an acquaintance and the sole dedicatee of this map, as well as to the maps in the Sala dello Scudo, which he was commissioned to paint, thanks to his close connection with the Venetian Secretary of State. Gastaldi’s maps set a new standard in cartographic representations of Asia, and formed the basis of those subsequently published by Ortelius, De Jode and Mercator.

Although Bifolco records 41 examples of this map held in institutions worldwide, this map is extremely rare on the market. We have been able to trace only two examples appearing in the last 50 years.