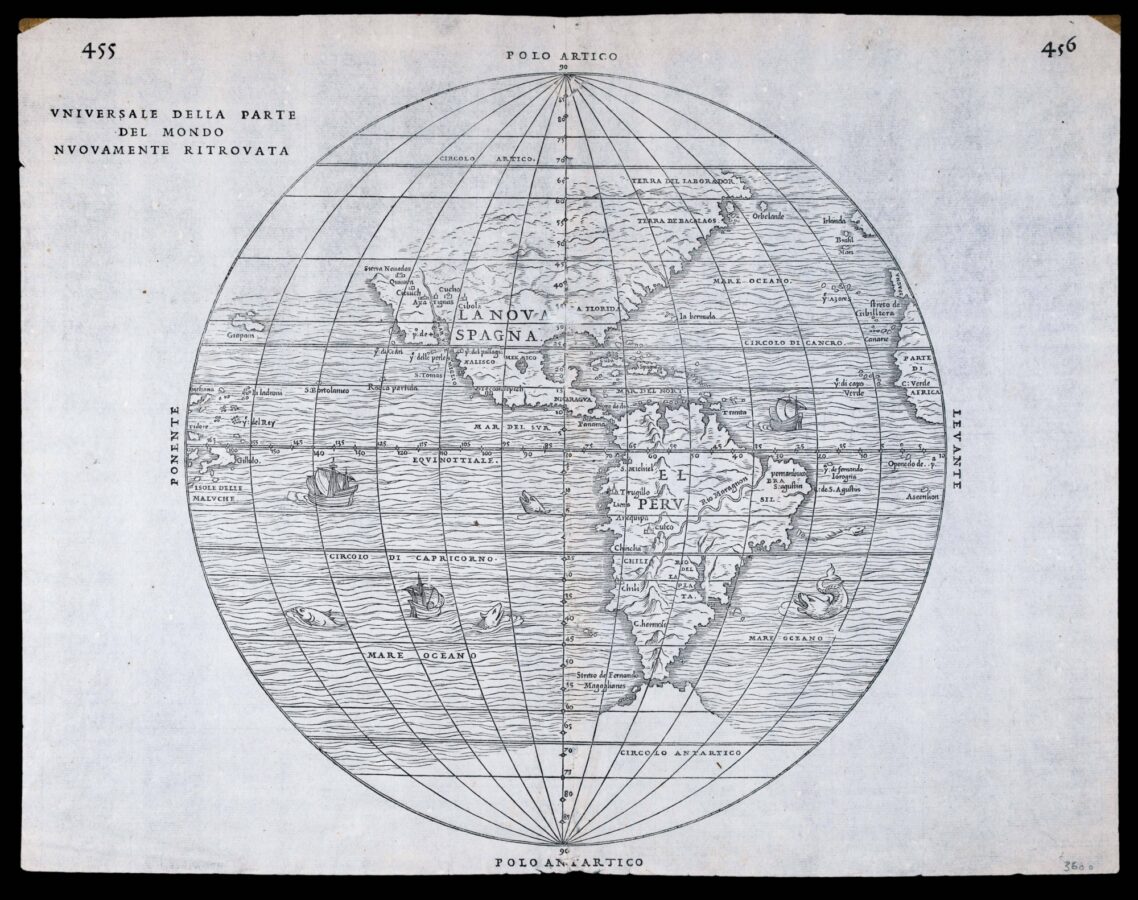 Gastaldi’s hemispherical map of the Americas

Second state of Gastaldi’s map of the Western Hemisphere, originally published in the third volume of Ramusio’s compendium of voyages, ​‘Delle Navigationi et Viaggi’, 1556. With the page numbers ​‘455′ and ​‘456’ appearing in the top left and top right of the map, respectively. Printed from the second of three woodblocks, the first was destroyed in a fire at the Giunta premises in November of 1557.

This hemispherical map depicts both American continents, extends to show the Molucca islands in the west, and Africa, Spain, and Ireland in the east, large and incomplete landmasses in the north and south, extending beyong the ​‘Circolo Artico’ and ​‘Circolo Antartico’. The northernmost reaches of North America are left blank, thereby avoiding making a statement about contemporary speculation of a land bridge to Asia and depicts Japan with two islands. Notably, this is the first printed map bearing place names from the travels of Francisco Vásquez de Coronado, who in 1540–42 travelled from Mexico to Kansas in search of the mythical cities of gold, Quivara and Cibolla. Both cities appear on this map, though Gastaldi places them in present day California rather than, as was popularly believed, to the east in Kansas. This is the first appearance of Quivara on a printed map, as well as of the Sierra Nevadas (following Juan Rodriguez Cabrillo’s 1542 voyage up the California coast).

This map is the work of Giacomo Gastaldi (c1500-1565), described by Burden as ​“Cosmographer to the Venetian Republic, then a powerhouse of commerce and trade. He sought the most up to date geographical information available, and became one of the greatest cartographers of the sixteenth century”. He was, and styled himself, ​‘Piemontese’, and this epithet appears often after his name. Born at the end of the fifteenth or the beginning of the sixteenth century, he does not appear in any records until 1539, when the Venetian Senate granted him a privilege for the printing of a perpetual calendar. His first dated map appeared in 1544, by which time he had become an accomplished engineer and cartographer.
Karrow has argued that Gastaldi’s early contact with the celebrated geographical editor, Giovanni Battista Ramusio, and his involvement with the latter’s work, ​‘Navigationi et Viaggi’, prompted him to take to cartography as a full-time occupation. In any case Gastaldi was helped by Ramusio’s connections with the Senate, to which he was secretary, and the favourable attitude towards geography and geographers in Venice at the time.