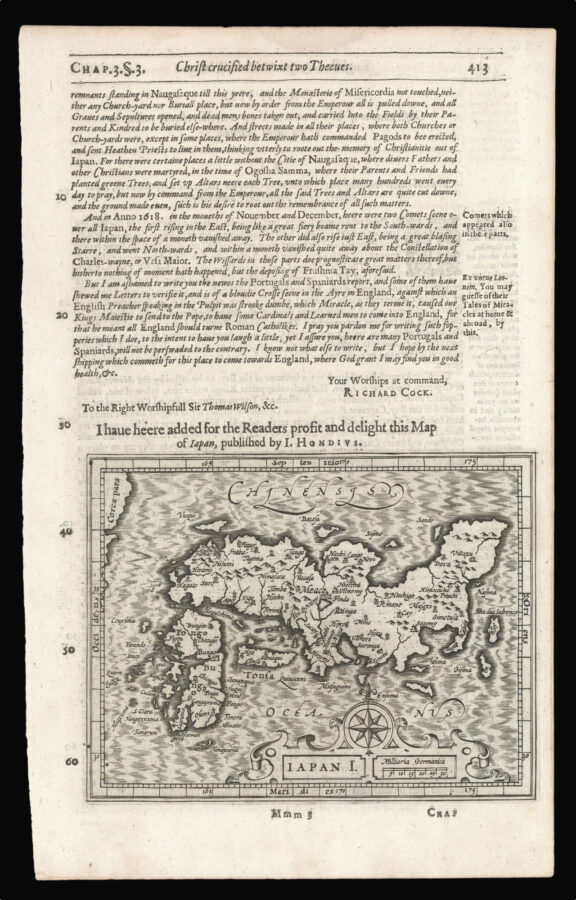 From the first edition of ​‘Hakluytus Posthumus’

The second state of the plate, published here for the first time on page 413 in the first edition of ​‘Hakluytus Posthumus or Purchas His Pilgrimes’, 1624. The map was previously published in the pocket-sized version of the Mercator-Hondius atlas from 1606 to 1621, after which the engraved plates were ​‘refreshed’. ​“Sometime after the edition of 1621 the plates were sold and taken to England where they were first used in the 1624 edition of ​‘Hakluytus Posthumus or Purchas his Pilgrimes’. As the plates were somewhat worn, they were ​‘refreshed’ by re-engraving the lettering and the hachuring of the seas. This led, at least in the specific example of the map of Japan, to changes in the lettering of some place-names as the engraver probably did not have an example of an early print as a guide…[for example] the place-name ​‘Xima’ (Shima) has been rendered ​‘Nuua’ in the re-engraved plate, and the island of ​‘Avagi’ (Awaji) has become ​‘Ivagi’ ” (Hubbard).

Samuel Purchas’ (c1577-1626) collection of voyages ​“is a continuation and enlargement of Hakluyt’s ​‘The Principal Navigations’. At the death of Hakluyt there was left a large collection of voyages in manuscript which came into the hands of Purchas, who added to them many more voyages and travels … This fine collection includes the accounts of Cortes and Pizarro, Drake, Cavendish, John and Richard Hawkins, Quiros, Magellan, van Noort, Spillbergen, and Barents, as well as the categories of Portuguese voyages to the East Indies, Jesuit voyages to China and Japan, East India Company voyages, and the expeditions of the Muscovy Company” (Hill).

Purchas’ magnum opus was the culmination of almost twenty years’ collecting oral and written accounts of travels in Europe, Asia, Africa, and the Americas, and so it is not surprising that at the time of its publication it was the largest book ever seen through the English press; the bulkiest anti-Catholic tract of the age; and the last great English work of geographical editing for almost a century.