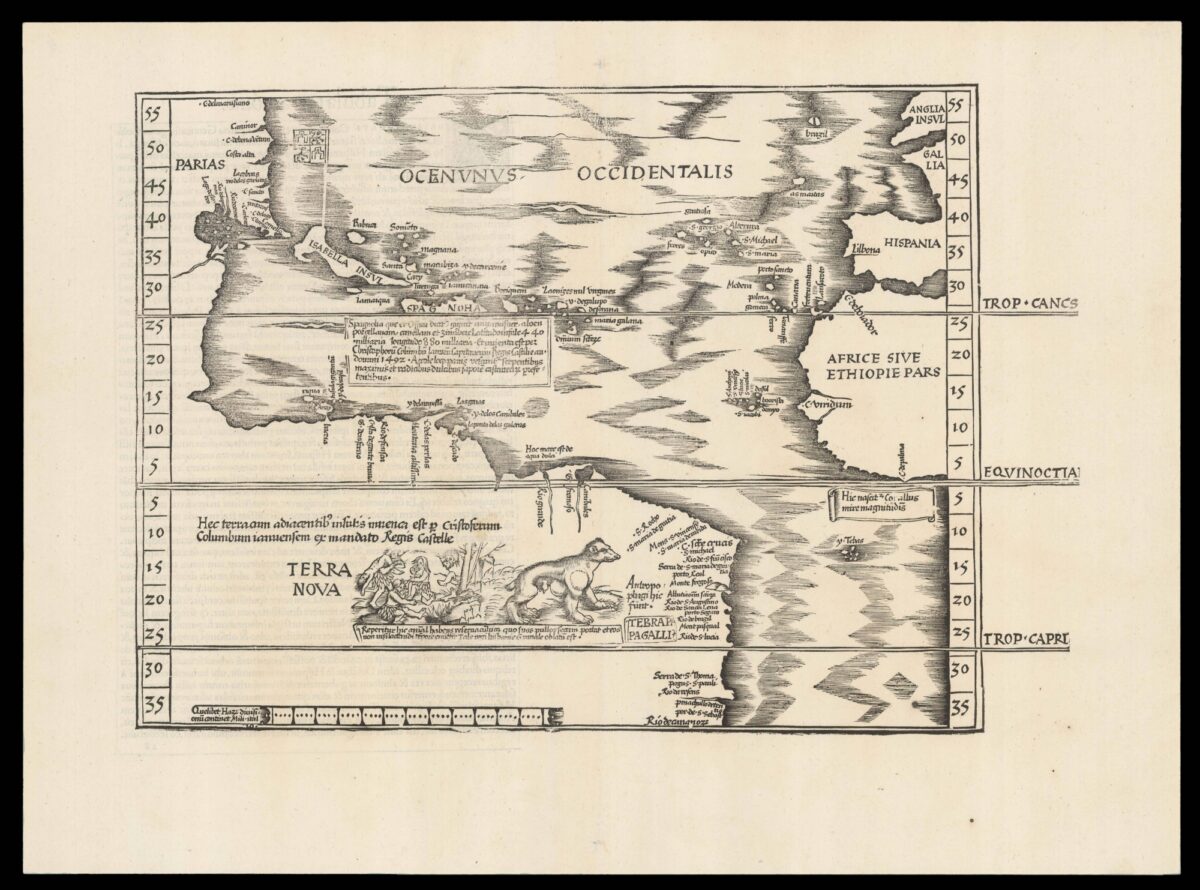 From Terra Incognita to Terra Nova

The ​“first map devoted to America to appear in an atlas” (Burden).

The map is centred on the Atlantic Ocean, and shows the new discoveries in the Americas. North and South America are joined together as one landmass (according to Deák, it is the first map to do so). South America is populated by a group of cannibals and an opossum, albeit one made to look much more ferocious than in reality. The Spanish flag is shown planted in ​“Isabella Insul”, or Cuba, where Columbus had landed on his first expedition on behalf of the Spanish crown. Columbus is also mentioned by name in the large text in South America as the discoverer of the New World.

This map first appeared in Martin Waldseemüller’s 1513 edition of Ptolemy’s ​‘Geographia’. It was revised by Laurent Fries in 1522, who added the vignettes based on the voyages of Amerigo Vespucci, some nomenclature and further detail on Columbus’ voyages in the scroll beneath Hispaniola. He also changed the inscription on America from ​‘Terra Incognita’ to ​‘Terra Nova’.

The verso text gives more details of Columbus’ discoveries and concludes with a condemnation of the use of ​‘America’ as the European name for the new continent, arguing that Columbus was there first. In fact, Waldseemüller himself had popularised the name ​‘America’ through his world map, produced to accompany the ​‘Cosmographia introductio’, published in collaboration with Matthias Ringmann and Jean Basin de Sendacour in 1507. It contains the first printed instance of the name ​‘America’ being applied to the discoveries over the Atlantic: ​“The fourth part of the earth, we have decided to call Amerige, the land of Amerigo we might even say, or America because it was discovered by Amerigo”. Waldseemüller himself was reluctant to identify America as a continent, and would never use the name America again. When he published his edition of Ptolemy in Strasbourg in 1513, he labelled South America ​“Terra Incognita” on his version of this map. However, nearly every significant mapmaker for the next quarter of a century relied on his work, popularising his geography and terminology.