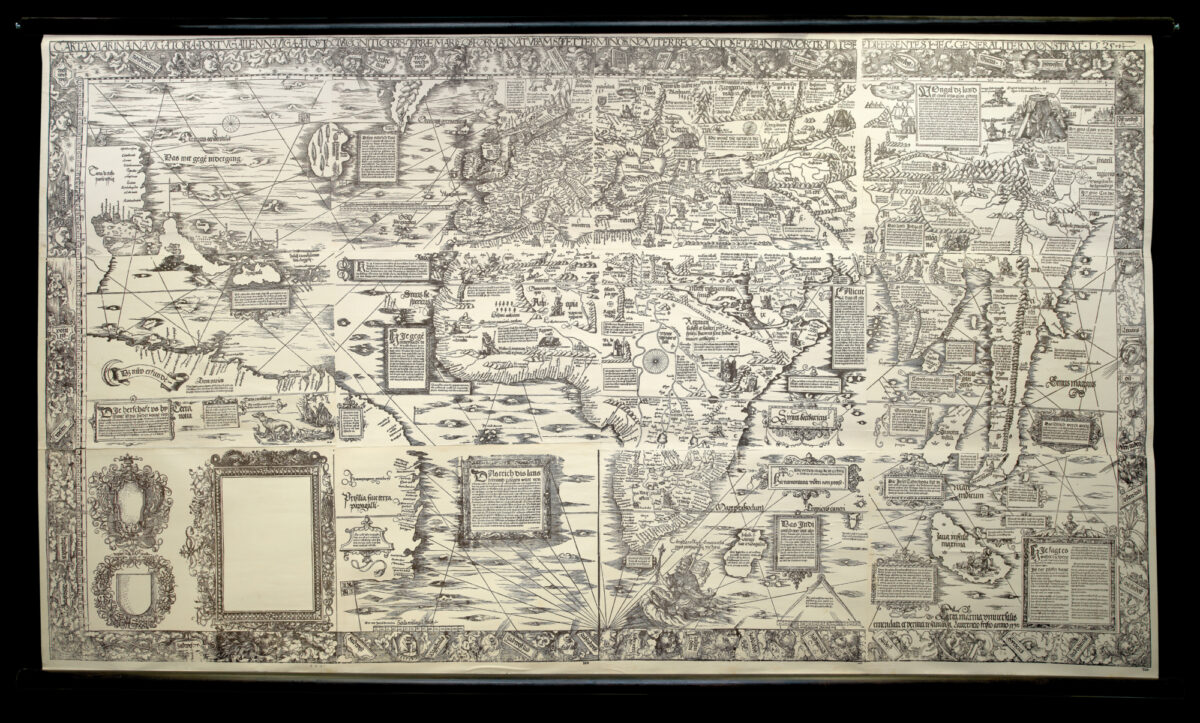 By FRIES, Lorenz; after Martin WALDSEEMÜLLER, 1525

Born in Alsace around 1485, Lorenz Fries initially studied medicine at a number of European universities before practising as a physician in a range of places including Strassburg, where he settled in 1519. While in the city, Fries became acquainted with Johann Grüninger, a printer and publisher who had previously worked with Martin Waldseemüller. During the 1520s, Fries worked as Grüninger cartographic editor, exploiting the corpus of material that Waldseemüller had created. His first venture into mapmaking came in 1520, when he executed a reduction of Martin Waldseemüller’s 1507 wall map of the world. Two years later, Fries published an edition of Ptolemy’s ​‘Geographia’ with maps drawn after Waldseemüller.

After this important work, Fries went on to reproduce another of Waldseemüller’s maps, the ​‘Carta Marina’, which had originally been published in 1516. Fries’ first edition was apparently completed in 1525, as shown on the present facsimile, but there is no complete extant example of that edition exists. In fact, the earliest example is from 1530, and is held at the Bayerische Staatsbibliothek, Munich.

With the ​‘Carta Marina’, Waldseemüller sought to present an updated and accurate conception of the world. Possibly reflecting the hand of Albrecht Dürer, it incorporates a wealth of geographical information with highly detailed topographical features illustrated across the map. By no means is all of the information presented accurate — North America is joined with Asia – but it was certainly one of the most sophisticated and comprehensive maps of the world produced at this time. Perhaps due to the controversy surrounding his earlier naming of the Western Hemisphere ​“America,” Waldseemüller omitted the word from the ​‘Carta Marina’. Fries’ edition preserves Waldseemüller’s efforts in full, from the cartography to the historical notes that accompany it, albeit translated into German. He did, however, add an illustration of a mother and baby opossum. As with Fries’ other publications, he did not bother to credit the original cartographer.

The present facsimile was produced in Munich in the early twentieth century. It was commissioned by Ludwig Rosenthal, a German antiquarian bookseller whose stock numbered over one million books at the turn of the twentieth century.

Lorenz, known as Laurent, Fries, was born in Mulhouse, Alsace in about 1490. He studied medicine at the universities of Pavia, Piacenza, and Montpellier, and then established himself as a physician in the Alsace region and Switzerland, before eventually settling in Strasbourg, in about 1519. There he met the printer and publisher Johann Grüninger, who worked with the Saint-Dié group of scholars, which included Walter Lud, Martin Ringmann, and Martin Waldseemüller. Grüninger printed several maps prepared by Waldseemüller, and supervised the cutting of the woodblocks for his 1513 edition of Ptolemy’s geography. 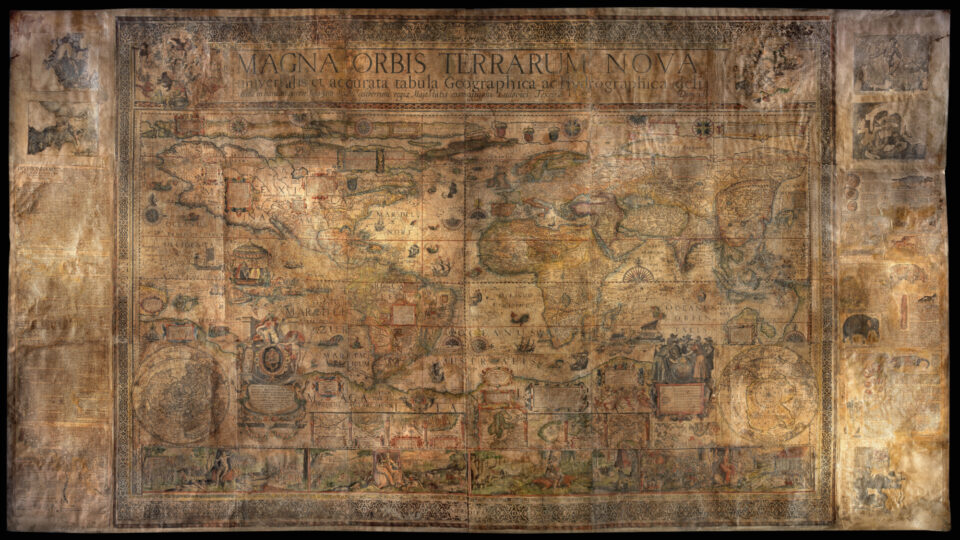