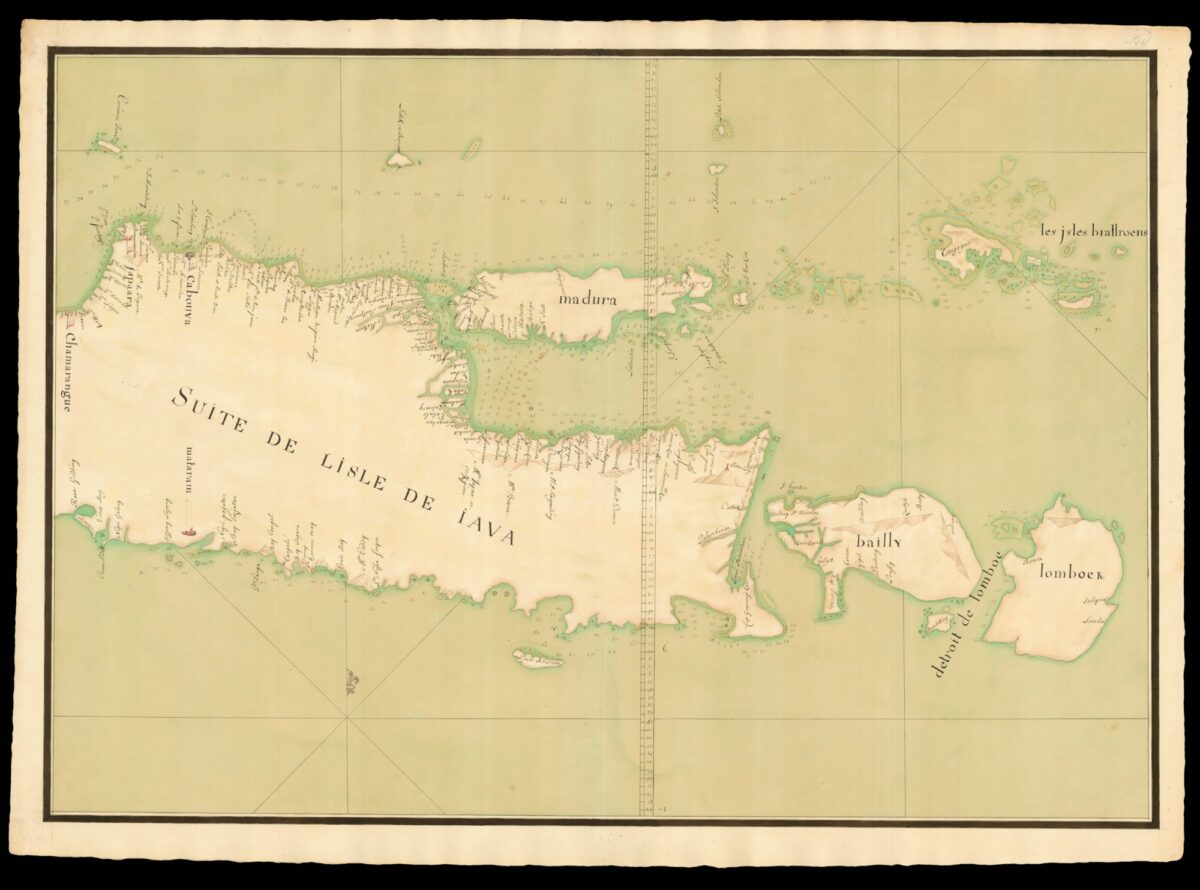 French manuscript chart of Java — the heart of the Dutch empire

The conquest of Jakarta by the Dutch, who immediately renamed the port Batavia, in 1619, gave the VOC its Asian headquarters, from which it commanded a vast trading empire, eventually extending from southern Africa to Japan, that lasted for nearly two hundred years. By the end of the 1730s, the British and French had begun to flex their seafaring muscles in the area, and were publishing their own maps. This large-scale and detailed French chart of Java is clear evidence of a hostile interest that is directed at the very the heart of the Dutch empire. It is very similar to Francois Valentyn’s large chart ​‘Nieuwe en zeer naaukeurige kaart van t Eyland Java Major of Groot Java’, published in his ​‘Oud en Nieuw Oost-Indien, vervattende een Naaukeurige en Uitvoerige Verhandelinge van Nederlands Mogentheyd in die Gewesten’, 1724–1726, based on his own research, correspondence, and from previously unpublished material secured from the VOC officials.
Some of this information must also have been available to the Chatelain family who published their ​‘Carte de l’Ile de Java: Partie Occidentale, Partie Orientale,…’ (1719), which included details of inland topography not found on this manuscript chart, nor on Valentyn’s. The Chatelain map is avowedly based on Hadriaan Reland’s work, which was not published by the Dutch until Johannes van Keulen issued it as ​‘Insulae Iavae pars Occidentalis edente Hadriano Relando’ in 1728. Interestingly, this manuscript chart includes soundings that are not expressed on Chatelains’ chart, implying some more recent knowledge of the coastline.
However, it does not reflect VOC knowledge of the southern coastline of Java dating from 1739, when Paulus Paulsz., in the ​‘sloop de Valk’, went on a surveying expedition there. His report and much more detailed chart, which ​“remained the best sea chart of this area until the end of the VOC rule” (Schilder, p.173), survive.
In 1513, Francisco Rodrigues sailed with the ​“Portuguese expedition from Malacca to find the unknown source of the rich trade in nutmeg, mace and other spices. They sailed along the north coast of Java, a trip from which Rodrigues prepared the first European map of Java’s basic outline only of the north coast from direct observation. The Dutch, who followed the Portuguese, also ignored the interior in their mapping. In 1619, when the VOC established Batavia (present-day Jakarta) as a trading entrepot, the south coast remained relatively unknown: it did not lie on the route to the valuable Molucca Spice Islands. The interior lands away from Batavia were ignored as long as the Javanese kingdoms remained quiescent; the VOC was intent only on ensuring a profitable return for its investors. Pursuit of these immediate economic goals restricted the exploration and associated topographic cartography of Java for nearly a century. A trivial cartographic misunderstanding reveals much about the stagnant state of mapping in Java at that time. The VOC sent Cornelius Coops by ship in 1698 to update the charts of the south coast; until this time, charting was largely restricted to the northern coast, where the Dutch ports and trading centres were located. Several schematic manuscript maps of the whole island appeared in Isaak de Graaf ​‘s ​‘Atlas Amsterdam’, compiled by the VOC at the end of the seventeenth century (but not published until the 1980s), chiefly showing unnamed rivers and several VOC strongholds in the island’s interior. At the beginning of the eighteenth century, further mapping of the interior was conducted in a spasmodic and uncoordinated manner. The maps, mostly by anonymous cartographers, are in manuscript form and are held by the Netherlands National Archives, The Hague. They were prepared internally by the VOC as administrative, planning and strategic documents for circulation and use by VOC officials. VOC maps were closely guarded trade secrets; however, commercial maps of the whole of Java and the neighbouring island of Madura were becoming readily available in Europe by the second decade of the eighteenth century” (Simpson).
This anonymous manuscript chart was probably prepared by the Dépôt de la Marine, known more formally as the Dépôt des cartes et plans de la Marine, the central charting institution of France. The centralisation of hydrography in France began in earnest when Jean-Baptiste Colbert became First Minister of France in 1661. Under his watch, the first Royal School of Hydrography began operating, as did the first survey of France’s coasts (1670–1689).
The Dépôt itself began as the central deposit of charts for the French Navy. In 1720, the Navy consolidated its collection with those government materials covering the colonies, creating a single large repository of navigation. By 1737, the Dépôt was creating its own original charts and, from 1750, they participated in scientific expeditions to determine the accurate calculation of longitude.
In 1773, the Dépôt received a monopoly over the composition, production, and distribution of navigational materials, solidifying their place as the main producer of geographic knowledge in France. Dépôt- approved charts were distributed to official warehouses in port cities and sold by authorized merchants. The charts were of the highest quality, as many of France’s premier mapmakers worked at the Dépôt in the eighteenth century, including Philippe Bauche, Jacques-Nicolas Bellin, Rigobert Bonne, Jean Nicolas Buache, and Charles-François Beautemps-Beaupré.
The Dépôt continued to operate until 1886, when it became the Naval Hydrographic Service. In 1971, it changed names again, this time to the Naval and Oceanographic Service (SHOM). Although its name has changed, its purpose is largely the same, to provide high quality cartographic and scientific information to the France’s Navy and merchant marine. 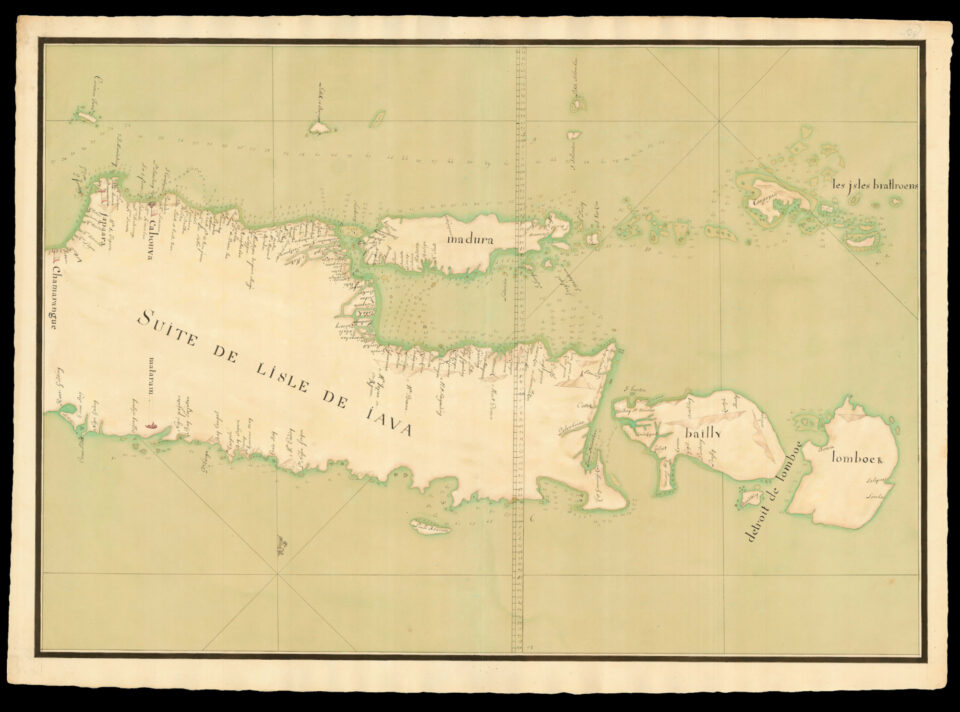 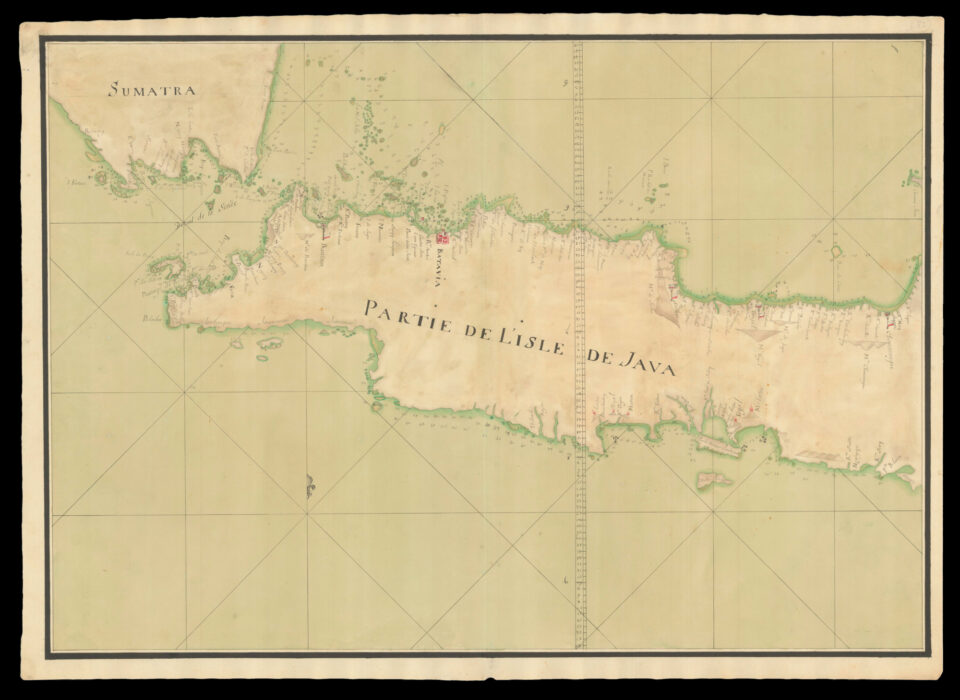 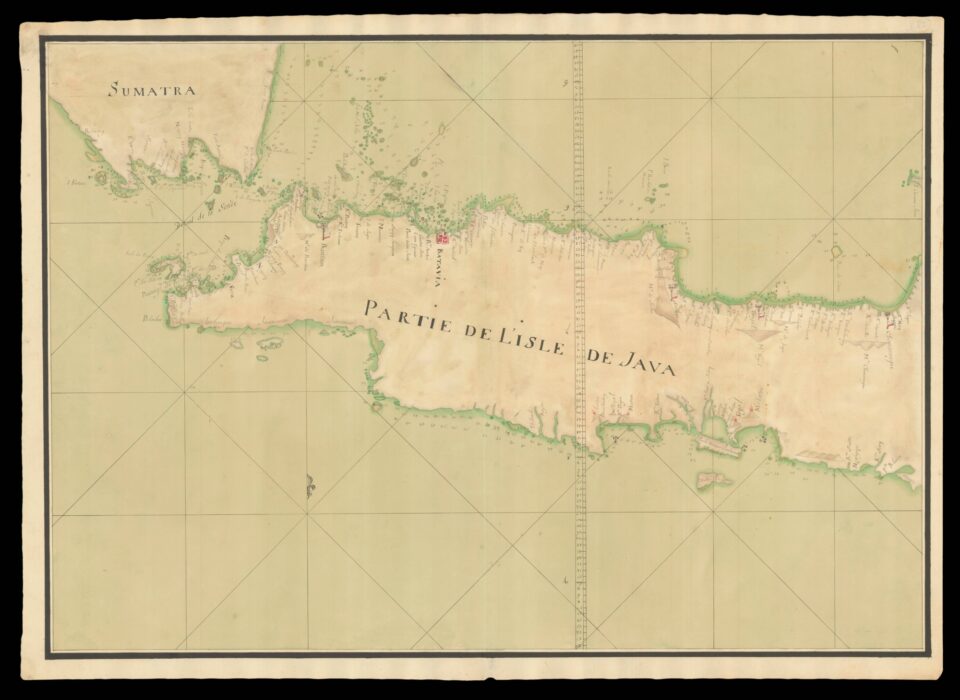