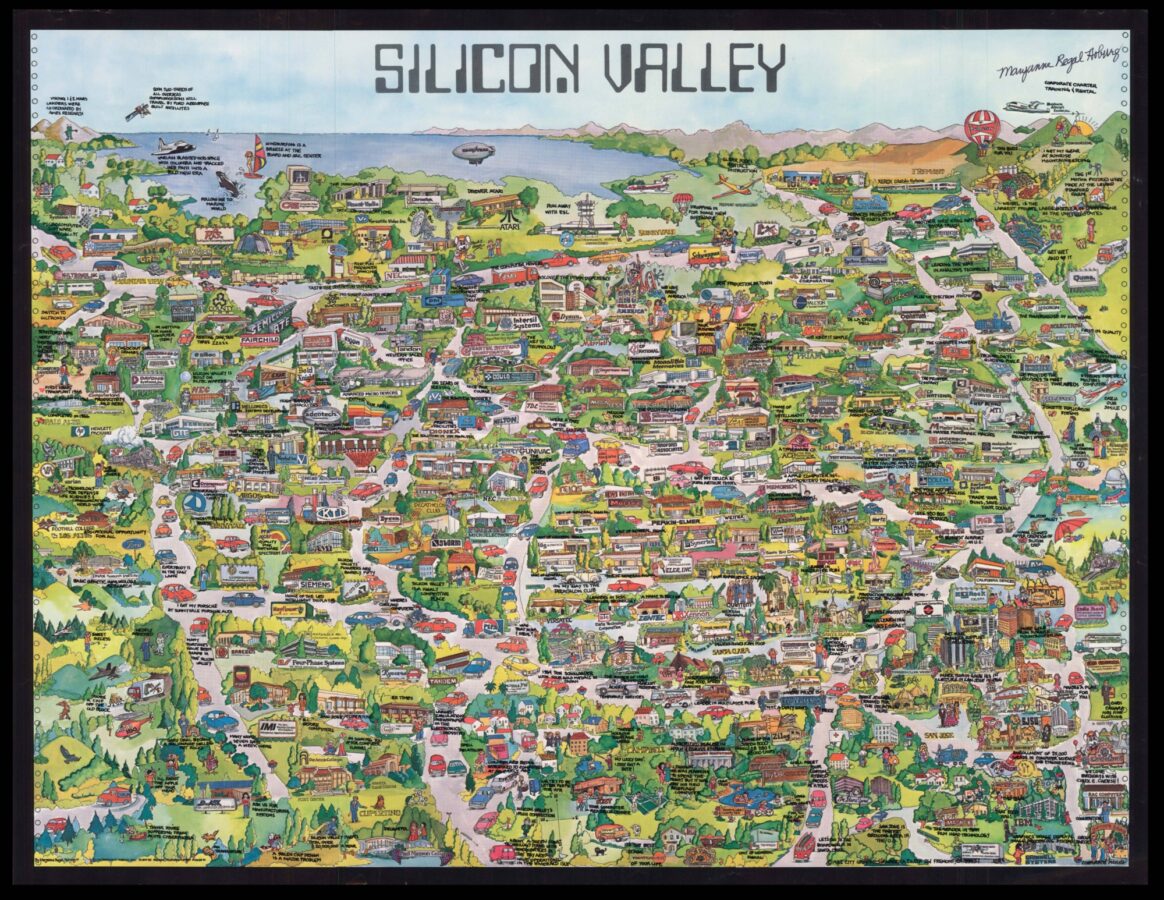 Foundation map of Silicon Valley — inscribed by the artist

First issue, pre-publication state, of this first map of Silicon Valley, inscribed by the artist. With ​“Decathelon” Club misspelled, which is ironic, given that it is spelled correctly in at least two other places on the map: a teacher near the center of the lower edge asks her pupils ​“to spell decathlon”; and the track where ​“Bruce Jenner trained for the decathlon” is shown. The latter is one of the many suggested captions for the published issue, present in this map in a form of overprinting. In this printing the zip code is given as 94537.

Hoburg famously took her camera, drove around the burgeoning community of technical companies, sketched what she saw, and created what would be recognised as the foundation map of Silicon Valley: providing a fascinating snapshot into the early days of the tech boom in California, and the map is filled with the logos and buildings of software and computer companies. Some of the companies shown have survived, and are now household names: IBM, Toshiba, and Hewlett Packard. At the lower edge is the distinctive original rainbow logo of what is arguably now the most famous software company in the world, Apple. The map also shows some of the victims of the failure of the market. Atari, at the upper right, would fold in 1984, following the recession in the video game industry in North America. VisiCorp, in the centre, suffered ongoing legal battles, and is now owned by Paladin. For the companies in the map, however, the risks were worth it to be at the cutting edge of technology.

The map was produced by a small graphic design company, City Graphics of America, who offered local businesses a place on the map for a fee. They would then simplify the urban landscape to make room for the names of the businesses and comic illustrations. The next issue, dated 1983 and printed on the same scale as the current map, not surprisingly includes many more businesses.

We know of no other example of this proof state of the map. The David Rumsey Map Collection includes an example of the published version, and a later edition on a larger scale.