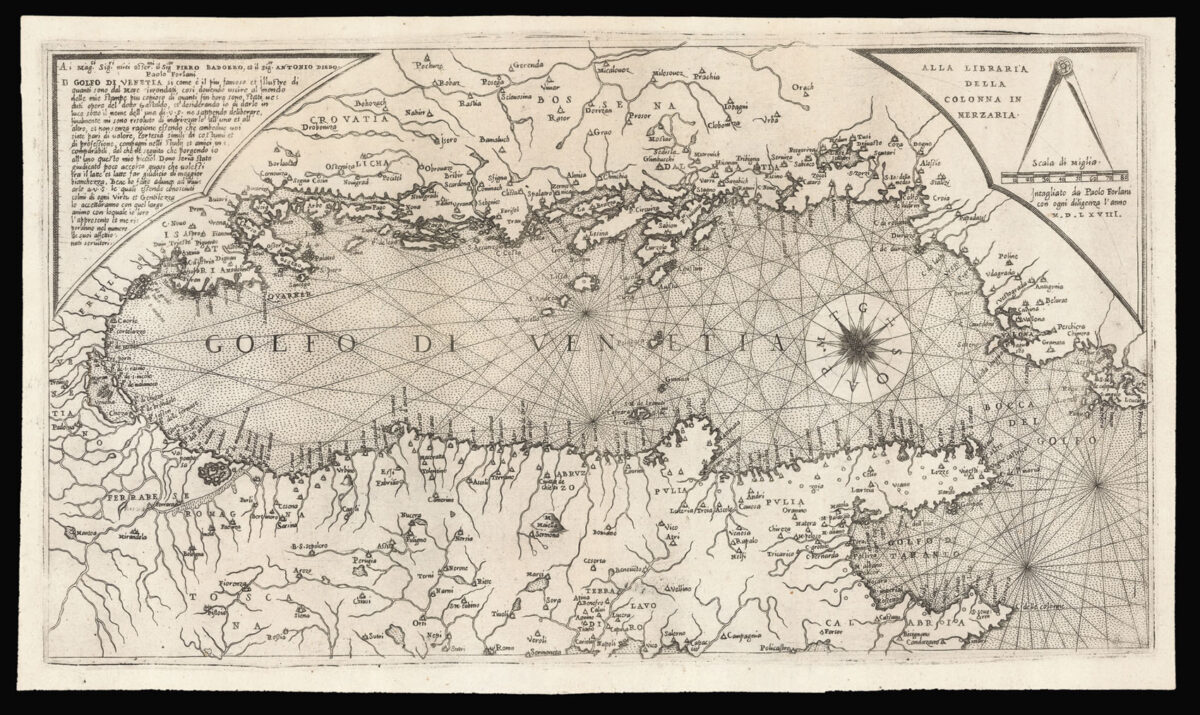 Forlani’s rare map of the Gulf of Venice

Fine, detailed and elegant: this beautiful map of the Gulf of Venice extends from Venice in the north to Corfu and the gulf of Otranto in the south. Oriented to the east, the coast of Croatia and Bosnia are at the top of the map, Venice is to the left and the eastern coast of Italy, including Tuscany. Abruzzo, Pulia and Calabria, are below. A long dedicatory legend to Antonio Diedo and Piero Badoero, appears upper right. The same note gives credit to Giacomo Gastaldi, however it is not believed that he composed this map. Upper left is Forlani’s imprint and the scale. The gulf itself is decorated with a fine compass rose and rhumb lines.

Following in the footsteps of his great colleague Giacomo Gastaldi, Paolo Forlani (fl.1560–1574), was a Venetian engraver and publisher of many significant maps and charts in the Renaissance. It was in Italy, and particularly in Venice, that the map trade, which was to influence profoundly the course of cartographic history, was most highly developed during the first half of the sixteenth-century.

Forlani was one of the leading mapmakers of the Lafreri school – a name given to a loose collection of mapmakers, publishers and engravers working in Rome and Venice between 1540 and 1580. Little is known about Forlani’s life, except that he originated from Verona, and was active in Venice between 1560–1574. He was somewhat unusual in being not only a mapmaker, but also an engraver, publisher and mapseller. He was evidently in much demand during his time in Venice as we know that he was employed by no fewer than four prominent publishers — Giovanni Francesco Camocio, Ferrando Bertelli and Bolgnini Zaltieri from Venice, and Claudio Duchetti from Rome.

A subsequent issue of the map has Forlani’s shop address erased from the plate.