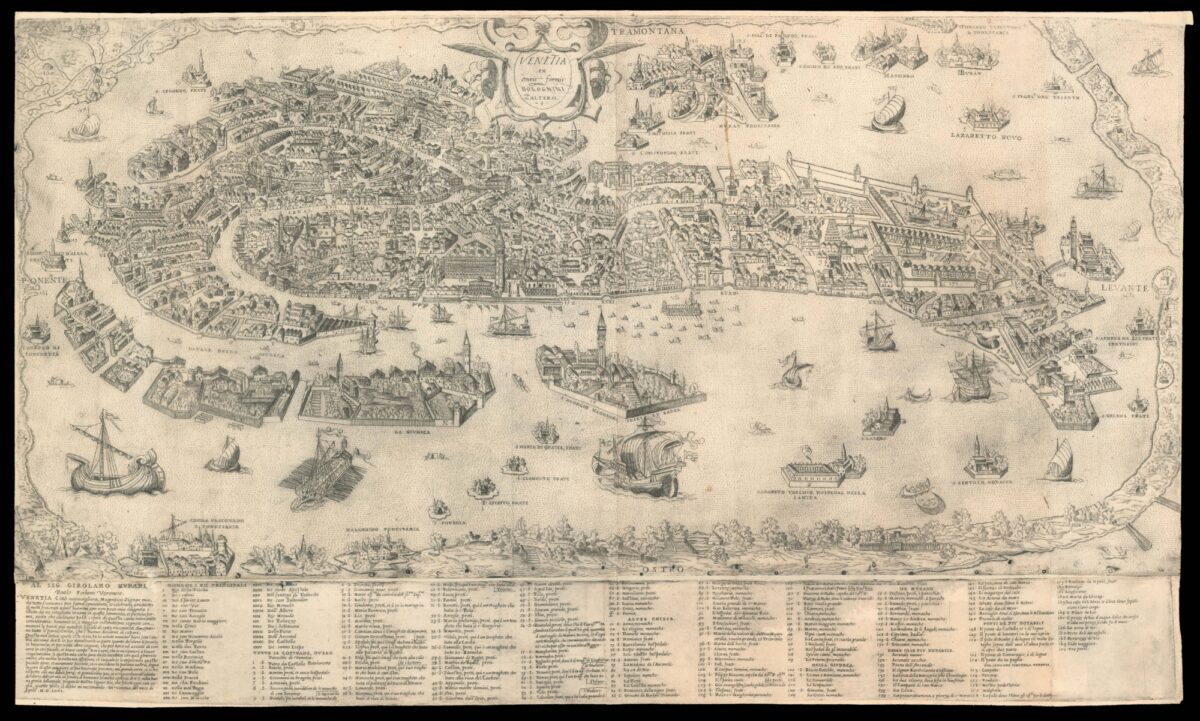 Magnificent, large-scale, bird’s-eye view of Venice, first published in 1565, this is the third issue to bear Zaltieri’s imprint and features the printed impressions of a horizontal row of rivets where the printers had attempted to join the engraved plates of the view and the key.

Shown from the same perspective as Jacopo de’ Barbari’s monumental woodcut map of c1500, Venice is seen rising like Venus fully formed from the lagoon, witnessed by an array of satellite islands and watercraft, the Venetian mainland compressed to a thin band at the horizon and to the left. Each canal, bridge and building is meticulously depicted and named in the comprehensive key below, so that contemporaries could have recognized each house and every parish or district, practically identifying every resident in the city to the locals.

At the close of the fifteenth-century, Venice was the capital of a vast empire, a mercantile centre and a departure point for travellers to the East. Located at the crossroads between East and West, Venice was a destination for foreign merchants and pilgrims. The Campanile and the Piazza San Marco, the Rialto Bridge, and other icons of the city, familiar to the foreigner, make this view of Venice accessible to them too. It is not surprising therefore that the lagoon is filled with every kind of boat, from gondola to the impressive barge of the Doge, and even an English barque.

Paolo Forlani (fl.1560–1574), was a Venetian engraver and publisher of many significant maps and charts in the Renaissance. It was in Italy, and particularly in Venice, that the map trade, which was to influence profoundly the course of cartographic history, was most highly developed during the first half of the sixteenth-century.

Forlani was one of the leading mapmakers of the Lafreri school – a name given to a loose collection of mapmakers, publishers and engravers working in Rome and Venice between 1540 and 1580. Little is known about Forlani’s life, except that he originated from Verona, and was active in Venice between 1560–1574. He was somewhat unusual in being not only a mapmaker, but also an engraver, publisher and mapseller. He was evidently in much demand during his time in Venice as we know that he was employed by no fewer than four prominent publishers — Giovanni Francesco Camocio, Ferrando Bertelli and Bolgnini Zaltieri from Venice, and Claudio Duchetti from Rome.

Printed by Bolognini Zaltieri, who is most famous for his map of North America, ​“Il Disegno del discoperto della nova Franza” published simultaneously as this view of Venice in 1566, and which is the earliest printed map devoted solely to North America, and also reduced from a much larger predecessor, Gastaldi’s large nine sheet map, printed to accompany his pamphlet ​“La Universale Descrittione del Mondo. Other maps published by him include a map of Ireland, of the Holy Land, and two plans of Tunis. He also issued a series of maps of the individual provinces of the Low Countries, copied from Tramezini.

In his dedicatory text Forlani draws veiled comparison to the larger work of his predecessor de’ Barbari by pointing out the convenience of the smaller and finer form of printing from copper that would become the format for future maps of Venice, such as Braun and Hogenberg’s birds-eye view of 1572.