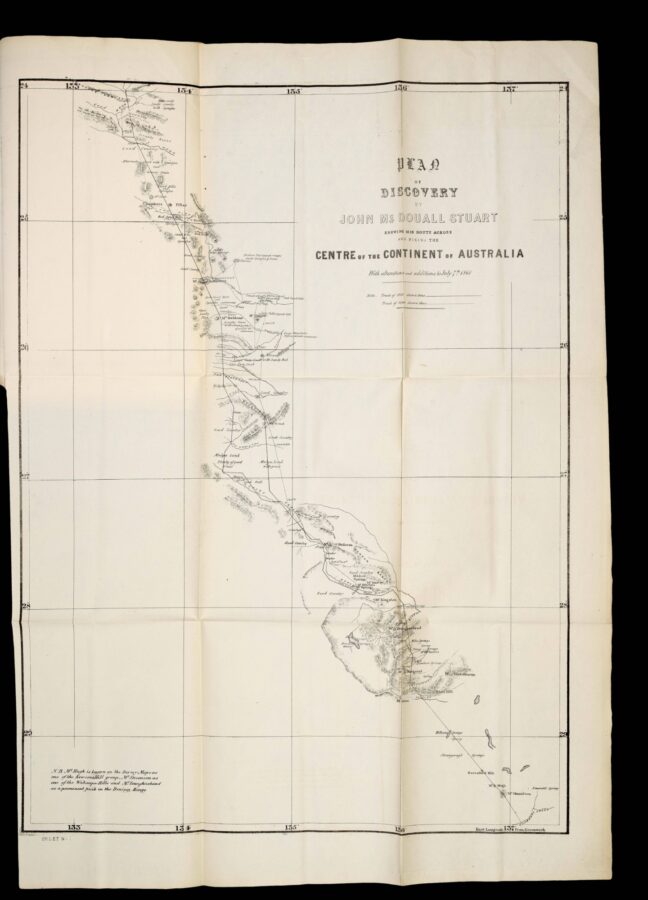 Plan of Discovery by John McDouall Stuart shewing his route across and fixing the Centre of the Continent of Australia With alterations and additions to July 7th 1861.

First publication of Stuart’s monumental map of the vast, sparse, and unforgiving center of Australia is appended to this equally rare report of Stuart’s ultimately unsuccessful fourth and fifth (of six) expeditions attempting to traverse Australia from South Australia to the Gulf of Carpentaria, in a race against Burke and Wills’ expedition from Victoria. The map shows Stuart’s and Gregory’s routes in 1860 and 1861 from Emerald Springs to Newcastle Waters in South Australia, on to James Ranges, Roper River and Blunder Bay in the Northern Territory. They include Gregory’s and Stuart’s camps, streams, waterholes, and notes on vegetation.

Sheet 1: Chambers Creek north to the Waterhouse Range, showing the explorer’s path and comments on the ​“good” country.

Sheet 3: Centred on the Ashburton Range and Newcastle Waters, showing Stuart’s numerous attempts to try to find a way through the dense scrub to the Victoria River. Also, the path of Augustus Gregory’s 1856 expedition along the Roper River, Elsey Creek and across to the Victoria River; and part of Ludwig Leichhardt’s track on the lower Roper River.

In Darwin, in the Northern Territory of Australia, stands a memorial at the northern end of the Stuart Highway, which traverses Australia from Port Augusta in South Australia. The iconic highway is named for Scottish explorer, John McDouall Stuart (1815–1866), who migrated to South Australia in 1815. His first experience of surveying the unforgiving red centre of Australia came in 1844, when he joined Charles Sturt’s expedition. The ​“seventeen-month journey revealed only desolation” (Morris).

Stuart led six attempts to cross the centre of Australia from South to North. The current report prints his journals covering the fourth and fifth expeditions, in which he reached and named the McDonnell Ranges and the Finke River; Stuart also raised a British flag at what he considered to be the centre of Australia. This account is only preceded by an extract published by the ​‘South Australian Advertiser’, 1860, and an account of the fourth expedition alone, as House of Assembly paper ​“65”, issued with only the first two mapsheets.

Fourth expedition.
In March of 1860, Stuart set off again, ​“with two men and thirteen horses. Most of their provisions were soon spoilt by floods, and when the party reached the freshwater creek that Stuart named after Finke on 4 April, they were suffering from scurvy and he had lost the sight of his right eye. They followed the Finke to the mountains that Stuart named after Governor Sir Richard Macdonnell and headed north again, naming Anna’s Reservoir after Chambers’ youngest daughter; on 22 April, he camped where he calculated the centre of the continent to be. Two miles away he named Central Mount Sturt (later changed to Stuart) and planted a flag as ​‘a sign to the natives that the dawn of liberty, civilization and Christianity was about to break on them’.

For the next month, the party tried in vain to find a route with sufficient water to take them to the north-west. When rain fell late in May they travelled 200 miles north to Tennant’s Creek where they made a depot. Pressing on to Kekwick Ponds Stuart tried to penetrate the near-by scrub but on 26 June was forced back. Two months later the party staggered into Chambers Creek. On his return to Adelaide Stuart was fêted at a public banquet and at Government House; one newspaper urged that he be given the government reward for crossing the continent because Attack Creek, his furthest point, was only 200 miles from explored country in the north” (Morris).

Fifth expedition.
​“At the end of 1860 the South Australian government voted £2500 to equip a large expedition to be led by Stuart. Burke and Wills had already set out to cross the continent so there was no time to lose if a South Australian party was to arrive first. On 1 January 1861, he left Chambers Creek with eleven men and reached Attack Creek late in April; with two others, he found a way through the scrub that had defeated him before, to Sturt’s Plain. After exhausting failures to pass the plains, with their provisions low and their clothes in shreds, Stuart gave in and on 12 July turned south to reach Adelaide on 23 September. He received the 1861 gold medal of the Royal Geographical Society from the governor” (Morris).

During his sixth expedition, between October and December of 1862, Stuart was finally successful in reaching the waters of the Indian Ocean. However, his reputation as a heavy drinker led many detractors to doubt that he reached the coast, though the tree he had marked with ​“JMDS” was positively identified in 1883 and photographed in 1885.

​“White-haired, exhausted and nearly blind”, Stuart decided to visit his sister in Scotland and sailed in April 1864. He later went to London, where he died in 1866, after publishing his ​‘Journals’, in 1864.

Rare: the complete map, in three parts, is only held at the State Library of South Australia 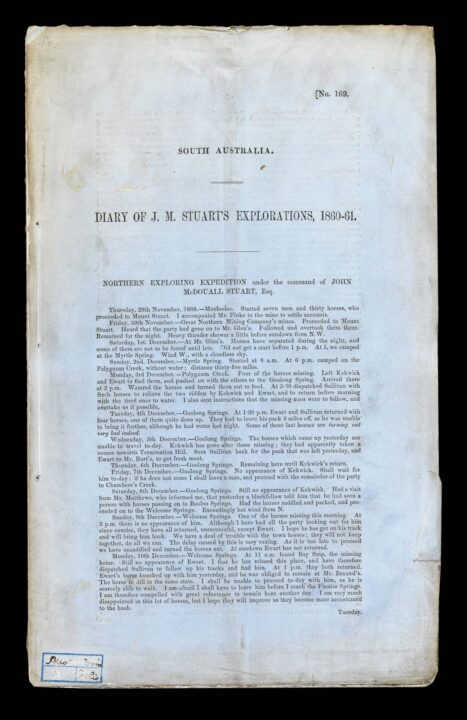 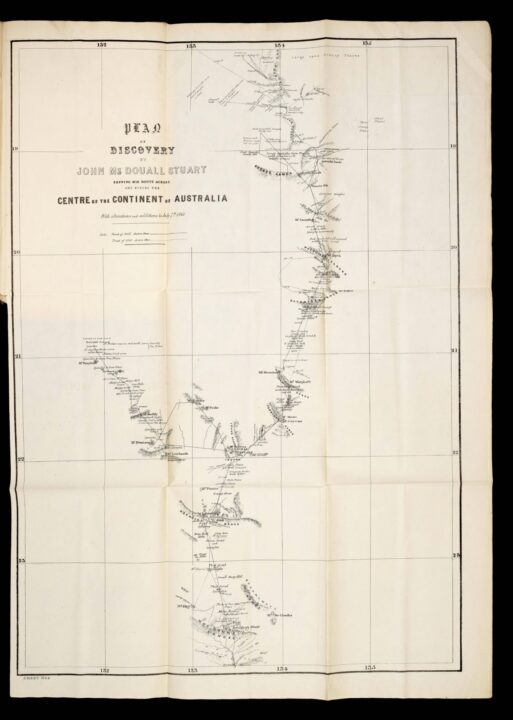 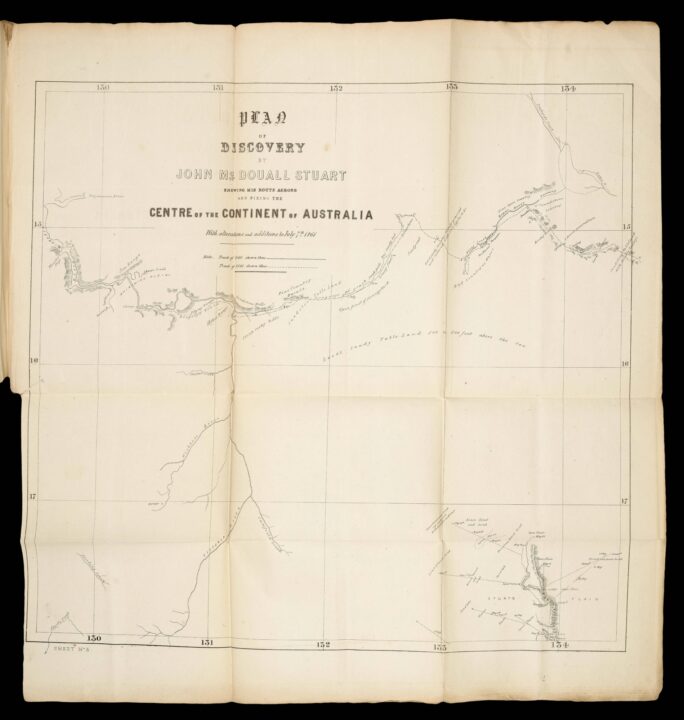 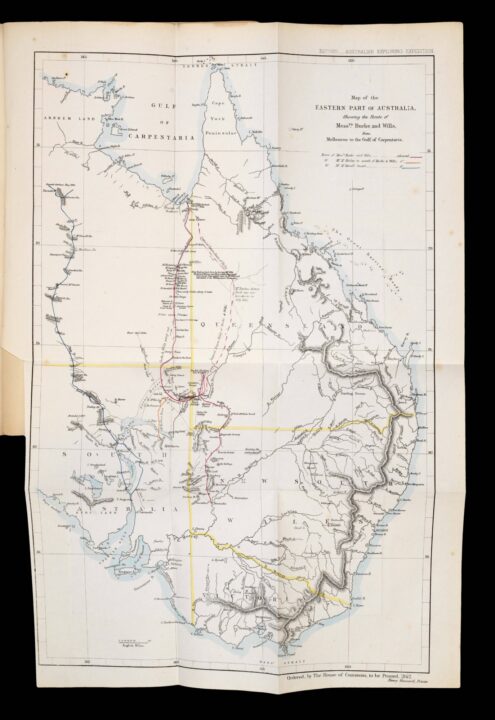 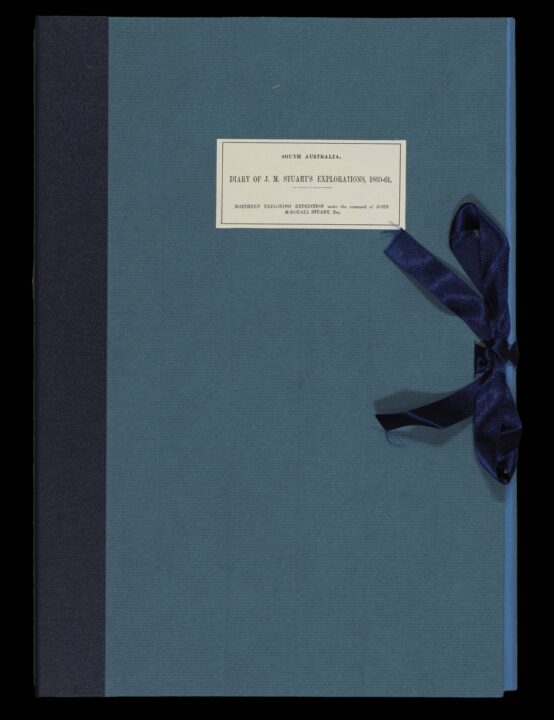