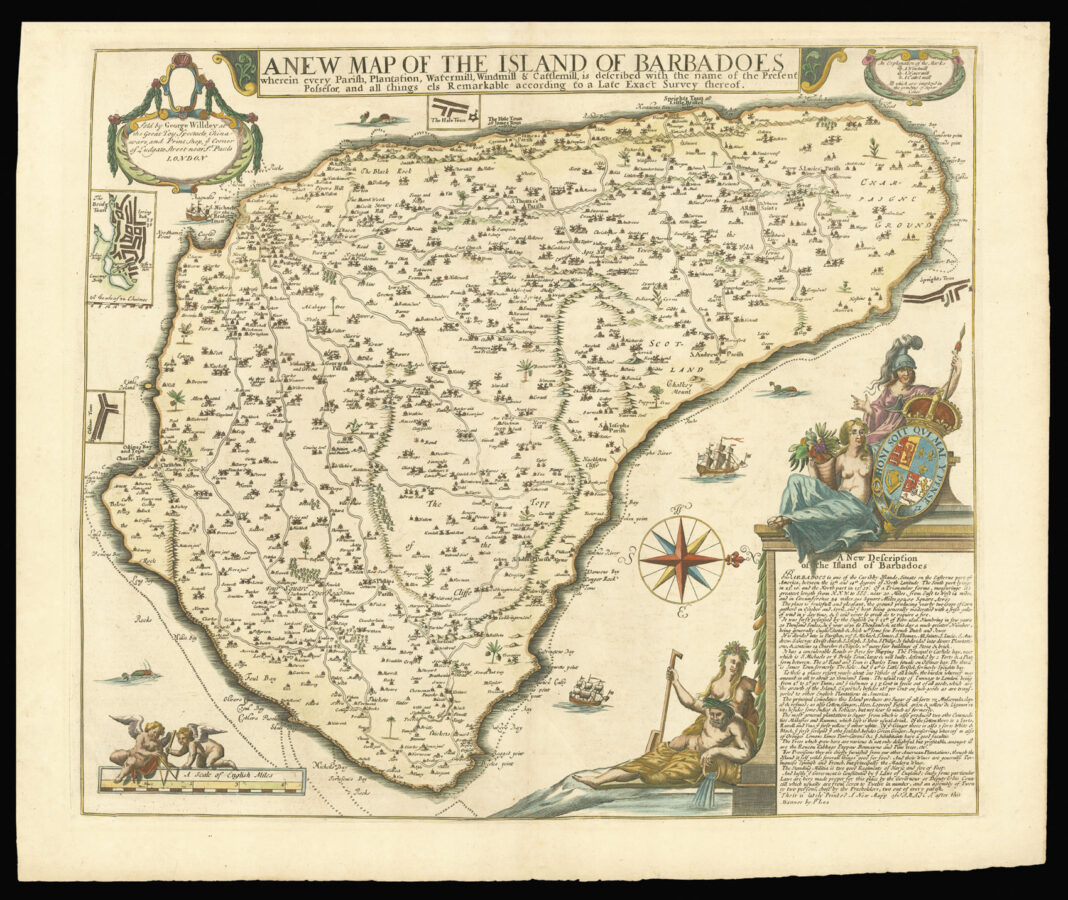 First systematic map of the island

A New Map of the Island of Barbadoes wherein every Parish, Plantation, Watermill, Windmill and Cattlemill is described with the name of the Present Possessor.

This very rare map is the largest and most detailed and systematic early map of Barbados. Produced from the surveys of Richard Ford during the 1670s it shows the already extensive nature of sugar cultivation throughout the island. The map is oriented with north to the right by a large compass rose. Each of the island’s eleven parishes, as established in 1645, are located and named. Each land plot and plantation (844) is identified with the proprietor’s name and only six small patches of native forest remain uncultivated. The celebrated sugar mills throughout the island are located and shown with icons identified in a key as either windmill, watermill, or cattlemill — all which are employed in the grinding of sugar canes.

The map is embellished with small vignettes of local plants such as the pawpaw tree, Bennawno (banana), Indian corn, sugar cane, pineapple, and Cabage Tree (palm). Bridgetown, Haletown, Speights Town, and Oistins are further detailed in small plan insets. One of the more interesting features of the map is the absence of the island’s fortifications, which were evidently omitted by Ford due to his Quaker sensibilities. The surrounding reefs are indicated by a line of crosses with navigational hazards and bays noted. An elaborate cartouche features the allegorical figure of Britannia with the British coat of arms, Ceres (the Roman goddess of agriculture), and Neptune with his mermaid consort. Contained within the cartouche is a ​“New Description of the Island of Barbados” that provides a description of the island’s history, geography, and commerce. The map is further embellished with ships, sea monsters, and putti. This is the third state, sold by George Willdey at the Great Toy Spectacle, Chinaware and Print Shop, ye Corner of Ludgate Street near St. Pauls.

All states of the map are rare.