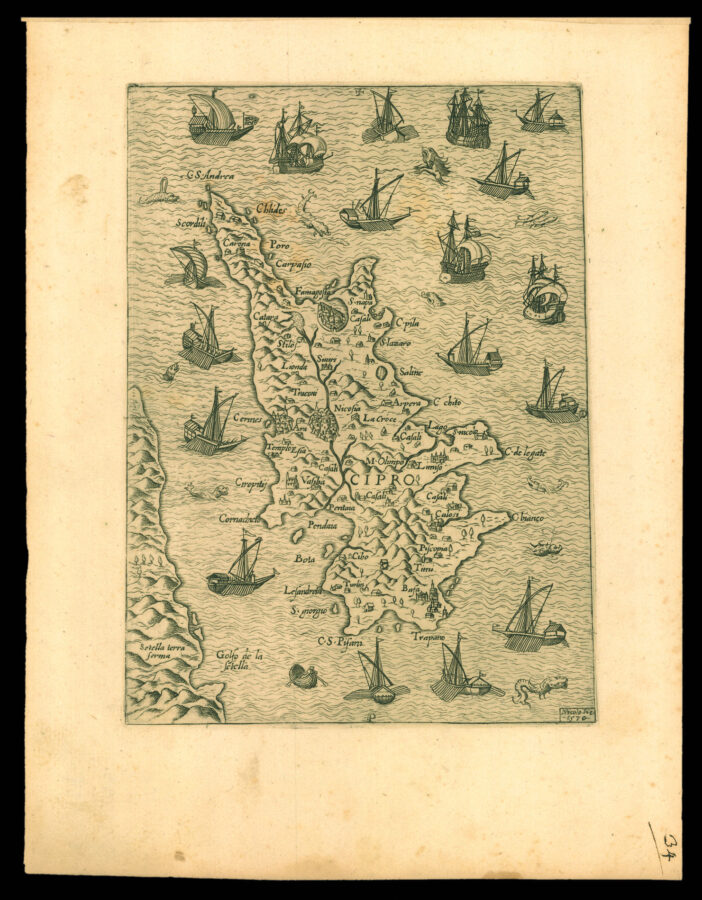 The first state of Nicolò Nelli’s map of Cyprus.

It shows the beginning of the Ottoman Empire’s naval attacks on Cyprus. Cyprus had come under Venetian rule in 1489, but the Ottoman Empire made repeated attempts to reclaim the island. In the summer of 1570, Sultan Selim II ordered a full-scale invasion of the island. A Turkish fleet of 100,000 men commanded by Admiral Piale Pasha set sail and successfully took Nicosia on 9 September 1570. Famagusta fell the following year on 1 August 1571, and by the end of the year the Turks controlled Cyprus. The map shows the vessels of the Venetian fleet surrounding Cyprus. It is oriented towards the east, facing the direction of the Ottoman threat. It is a smaller version of a map by Claudio Duchetti, printed in Rome in 1570. Small maps like the present example were issued separately for loose sheet circulation and then often collected in a book to meet the interest of a specific customer. Nelli’s map sometimes appears in the rare composite atlas by Simone Pinargenti, ​‘Isole che son da Venetia nella Dalmatia et per tutto l’arcipelago fino a Costantinopoli’ (1573). Nicolò Nelli (1530–1573) was a Venetian engraver and printseller, who published the works of Giovanni Battista Fontana and Giorgio Ghisi and collaborated with Bertelli en Zaltieri.

Rare; we have only been able to trace one institutional copy, in the Bank of Cyprus Cultural Foundation. Three other examples of this map have been sold on the market: by Swann Galleries, New York in 2014 for $6,750; as part of a composite atlas which sold for €48,300 at Reiss and Sohn, Frankfurt in 2005; and individually by Reiss and Sohn, Frankfurt in 2002 for €13,000.