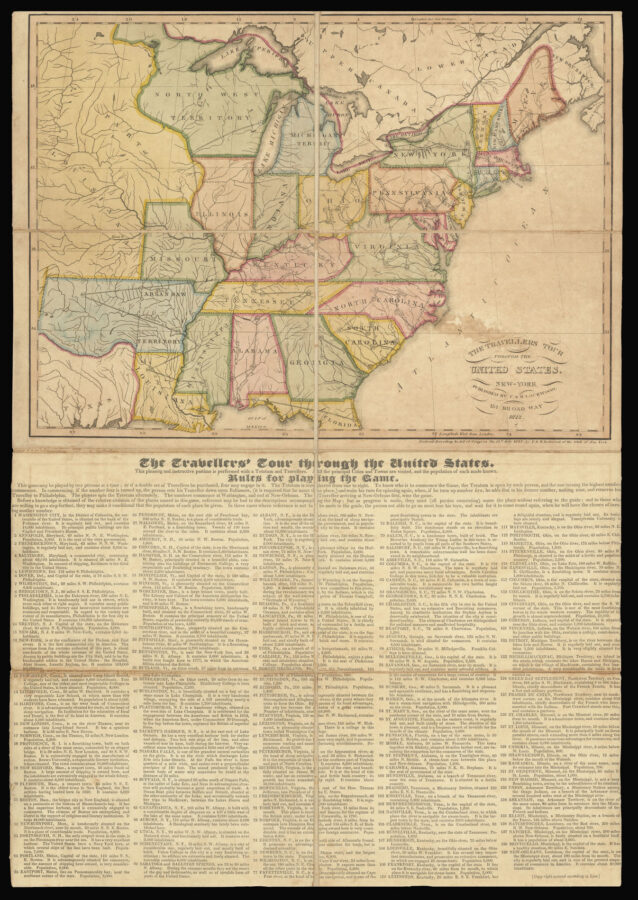 Your Traveller’s Tour Through The United States. This pleasing and instructive pastime is performed with a Tetotum and Travellers. All the principal Cities and Towns are visited, and the population of each made known. Rules for playing the Game.

Rare game map of the United States, the ​“first American board game” (Hoffman).

This rare board game was printed by Frederick and Roe Lockwood, two brothers who had set up at No.154 Broadway and Liberty Street, New York, in the early 1810s. Initially they specialized in foreign language publications, but by the early 1820s they branched out into ​“new and interesting pastimes for the Youth”.

The first such game was the present example, published by the brothers in 1822. The map stretches from the Eastern Seaboard, to the newly incorporated states of Missouri, Maine, and Arkansas, with each town on the game numbered from 1 (Washington) to 139 (New Orleans). A key below the map, provides a brief description of each town, together with the population of major conurbations. The game was played with counters and the use of a totem (numbered from 1–8) which was spun. Totems were often used at the time for children’s games as dice were connected with the vice of gambling. Once the player had spun the totem and moved the required number of places, they were then required to name the town on which they had landed, and if they were playing the harder version of the game to name the town’s population. The winner is the person who reaches New Orleans first.

The work is certainly very rare. OCLC records only three institutional examples; those at the New York Public Library, Brigham Young University, and the University of Michigan. The first two apparently had the slipcase, the last seemingly not.