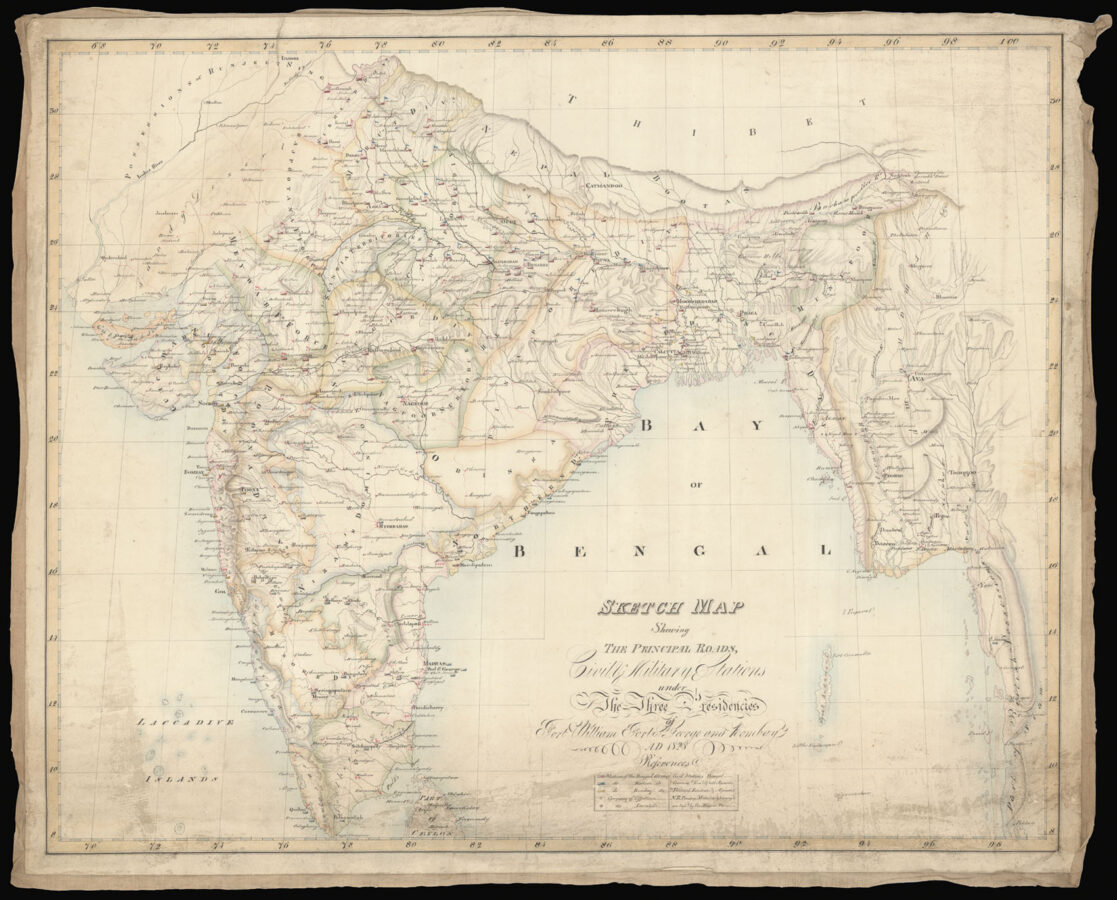 A finely executed manuscript map of India and Burma

The map shows the huge swathes of India that had come under the control of East India Company by the first quarter of the nineteenth century. The EIC had throughout the preceding 40 years had dramatically intensified its designs towards creating an empire spanning India. After decades of intermittent conflict, the British finally crushed the Sultanate of Mysore during the Fourth Anglo-Mysore War (1798–9). The British annexed the Kanara Coast and made what remained of Mysore a puppet state. Hyderabad became a client state of the Company in 1800 and, in 1801, the British assumed practical control over the Carnatic, with the nawab maintaining only nominal authority. The Kingdom of Travancore, occupying the southern part of the Malabar Coast, became an EIC client state around the same time.

The EIC also managed to vanquish the mighty Maratha Confederacy, which during the mid-18th Century had become the dominant force in central and western India. During the three Anglo-Maratha Wars, fought between 1775 and 1818, the power of this great empire was progressively eroded. Upon the conclusion of the Third Anglo-Maratha War (1817–1818), the British acquired practical control of all of India south of the Sutlej River (a major tributary of the Indus), with the areas newly added to its sphere including modern Rajasthan, Gujarat, Maharashtra and Madhya Pradesh. While some of these lands were technically placed under the sovereignty of various Indian rulers as princely states, they were actually under the suzerainty of the EIC.

The map shows India divided in the EIC’s three Presidencies: Fort William (Bengal), Fort George (Madras), and Bombay. Relief is shown as are roads, rivers, and all major towns and cities. Principal cities are marked in uppercase; and provincial boundaries are marked and provinces named. The various military stations of the Presidencies are marked Red (Bengal), Blue (Madras), and Yellow (Bombay). Effective Military Companies i.e. ones that could be deployed into the field, are marked with a cross; and Invalid Military Companies i.e. companies of veterans who where no longer able to see active service but were employed to guard stores, and other military compounds, marked by a cross and a circle. Civil stations of Bengal, districts of EIC regional government, bear a blue flag; commerical residencies and salt agencies, a yellow flag; and political residencies a red flag. A note below the key states that military forces for Penang, Malacca, and Singapore are supplied by the Madras Presidency.