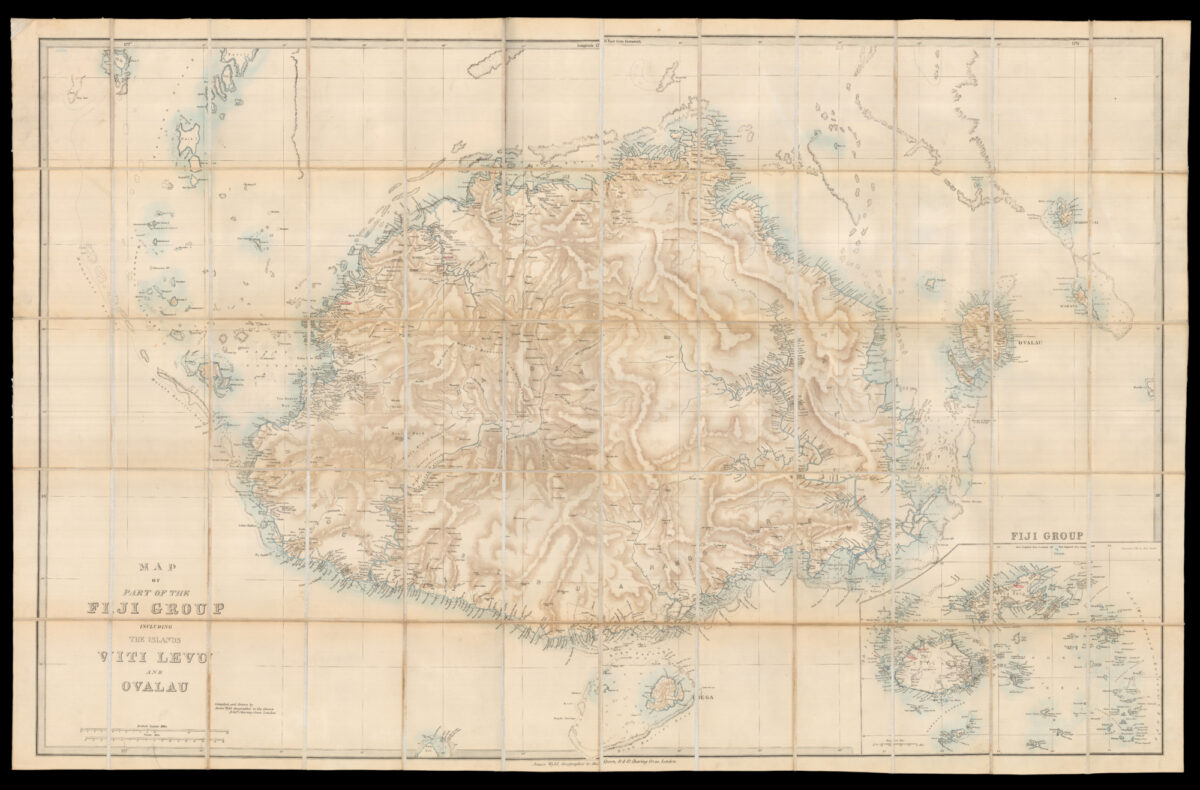 Map of Part of the Fiji Group including the Islands Viti Levo and Ovalau.

One of the most detailed maps of Fiji published in the nineteenth century.

Wyld published the present map of Fiji around the time of Britain’s annexation of the islands in 1874. The archipelago of Fiji was first visited by a European explorer, Dutch sailor Abel Tasman, in 1643, but it was not until 1789 that the islands were charted and plotted by William Bligh, who passed the archipelago on a voyage to Batavia. During the nineteenth century, European trading vessels more common and by the middle of the century Europeans had started to establish towns in the archipelago, particular on the island of Ovalau, Viti Levu and Vanua Levu.

Viti Levu is the focus of the present map, which shows the largest Fijian island with numerous toponyms along the coastlines, and relief represented across the landmass. To the banks of the Rewa River numerous parcels of land are marked, showing the extent of the 2,500 white settlers who had come to the island over the previous 20 years in order to set up cotton plantations, which had and continued to cause much resentment amongst the native population. Several of the place names are underlined in red. Numerous smaller islands are depicted around it, and the ​“Fiji Group” as a whole is shown in an inset in the lower right-hand corner. Beneath the title in the lower left-hand corner are two scale bars.

James Wyld (1812–1887) was ​“the most important mapmaker producing maps of London in the year of the Great Exhibition”. Wyld was a highly successful publisher, MP for Bodmin, and an active figure in public life. He promoted the development of the British Library and campaigned for the Public Libraries and Museums Bill, accusing its agricultural opponents of trying to make the poor drink instead of read in order to keep malt consumption high; although he did oppose the introduction of the Ordnance Survey on behalf of private surveyors. Like his father, he was made Geographer to Queen Victoria and Prince Albert in 1836. He built his business on his ability to produce maps quickly in reaction to new discoveries and information: Punch remarked drily that if a country were discovered in the centre of the earth then Wyld would have a new map out ​“as soon as it is discovered, if not before”.

Extremely rare: we have been able to trace only two institutional examples of the map, held at the Peabody Essex Museum in Salem, and the State Library of New South Wales.