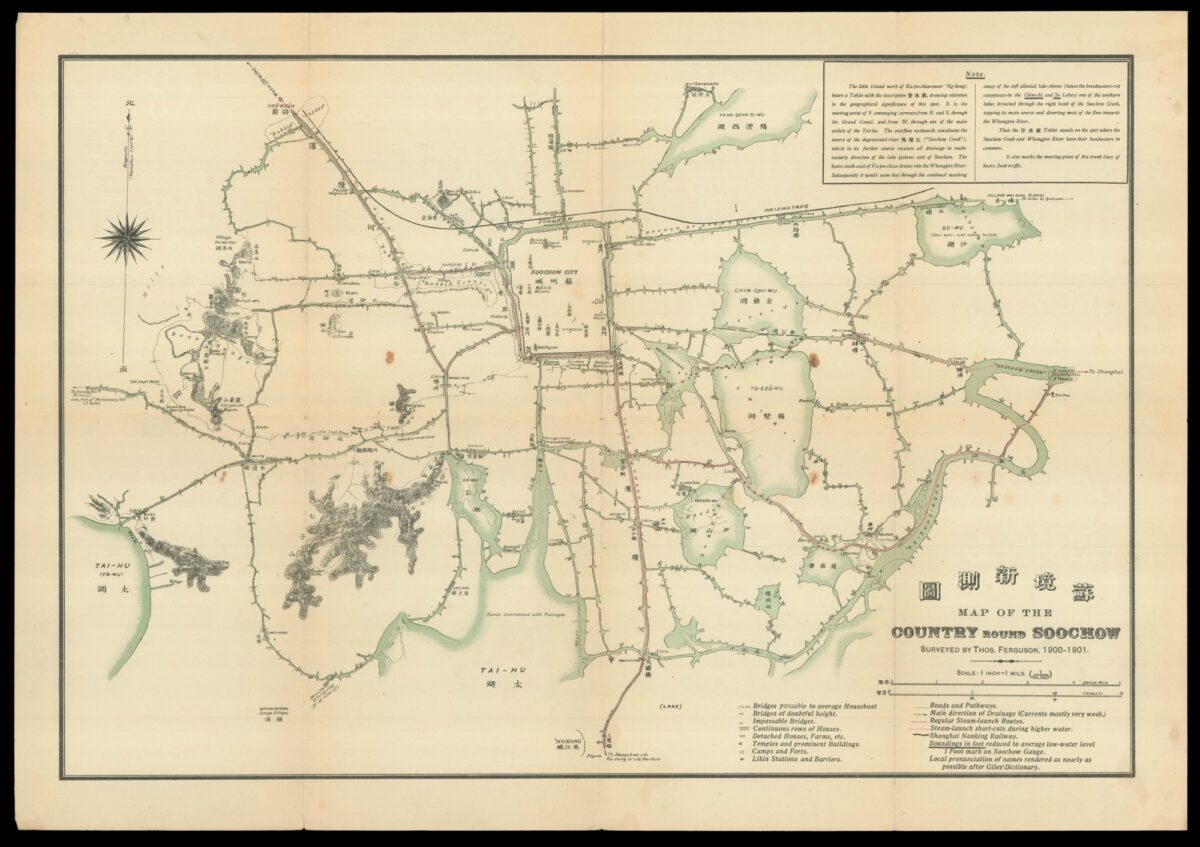 Map of the country round Soochow 蘇境新測圖 Surveyed by Thomas Ferguson, 1900–1901

A comprehensive map of Soochow [Suzhou] based on the survey by Thomas Ferguson in 1900. The area depicted spans from Yangcheng xihu 陽城西湖 (Yangcheng West lake) situated on the lower reaches of the Yangtze River, down to Sanli qiao 三里橋 (Sanli bridge) that connects to Hangchow [Hangzhou] in the south, and from Taihu 太湖 (Tai lake) to the west to the Suzhou [Soochow] creek in the east connecting to Shanghai. Soochow [Suzhou] city is depicted in a rectangle in the middle of the upper section, marked as ​“Soochow city”, encircled by a waterway that extends outwards into several streams that join with different lakes and branch of the Grand Canal. All waterways are easily distinguished by the shade of green.

The map is printed in both Chinese and English for the title and major landmarks, descriptions indicating more specific features and the legend are given in English only. The map shows various features of the city, including bridges, buildings, stations, roads, steam-launch routes and Shanghai-Nanking [Nanjing] railway. Some features are meticulously noted and distinguished, for example, three different keys are used to distinguish ​“Bridges passable to average Houseboat”, ​“Bridges of doubtful height” and ​“Impassable Bridges”. An inset is shown at the top right, giving particular attention to a tablet called 分水潡, which is not depicted on the map, only a description of its location is given, which locates it to bottom, to the southeast of Taihu 太湖 (Tai lake), near ​“NG-KONG” 吳江城. It also explains the system of waterways between the Soochow [Suzhou] creek and the Whangpoo river.

Thomas Ferguson was a mapmaker active around 1900, based in Shanghai. While he was surveying the waterways near Shanghai between 1900–1901, it seems that Suzhou as the neighbouring city was also included, and hence the present work. The map of Shanghai was commissioned by the Imperial Maritime Customs, a tax collection institution jointly set up and managed by the Chinese, French, British and American representatives in 1854. Located in Shanghai, which had become a foreign treaty port since China’s defeat in the First Opium War in 1842, the service aimed to replace the previous imperial customs house. The new institution managed customs collection in the treaty ports between 1854 to 1948. Between 1862 and 1899, steam boats began to ply inland along the narrower waterways. ​“Five new Treaty Ports and five Ports of Call had been opened along the Yantze and trade had grown enormously. So, to meet the altered conditions and calls for revision, Hart [Commissioner of the Imperial Maritime Customs] consulted the river port Commissioners and, as a result, revised Yangtze Regulations containing many provisions for tightening Customs control were put into effect on 1 April 1899” (Foster Hall 20). Ferguson’s map was commissioned in the same year and was likely part of the Customs Service’s drive to attain more knowledge of the area.

Kelly & Walsh was an 1876 merger of two Shanghai-based English language booksellers – Kelly and Co. and F. & C. Walsh – produced Kelly & Walsh, a prodigious publisher and retailer which relocated to Hong Kong in the 1950s, was ultimately sold to book seller Swindon Book Co. Ltd. It was most active from the 1880s through the 1930s, with publications from cities including Hong Kong, Singapore, Tokyo, and Yokohama.