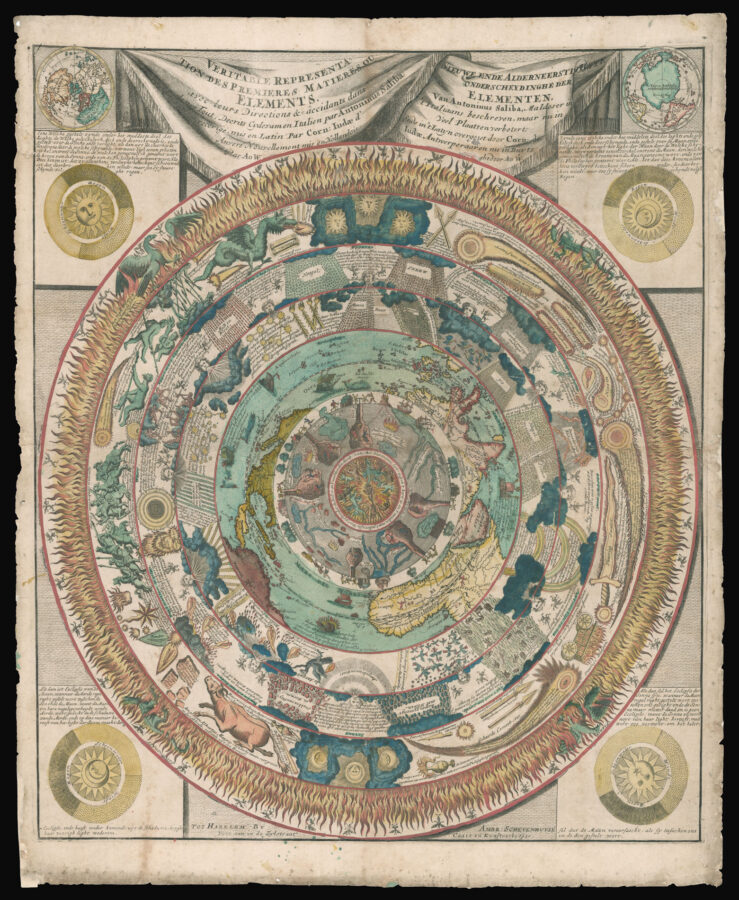 A rare separately-published world map combining geography with the supernatural.

This striking representation of the cosmos is composed of eight concentric rings. At the very core is the burning Inferno; next is the subterranean world with various examples of mining, underground rivers and lakes, and on the surface are windmills; the middle rings hosts the ocean and part of an earthly hemisphere; the following two rings shows celestial phenomena, including storms, rainbows and the twelve classical wind heads; the penultimate ring depicts the heavens with zodiac representations and notes on the historical appearance of comets; finally, the outer circle is a ring of fire populated by demons, phoenixes and salamanders.

Outside the main composition are four corner squares with representations and notes on the Sun, the Moon, and their eclipses. Flanking the title are two small insets of the Northern and the Southern hemispheres.

The map was originally compiled in 1582 by Antonio Saliba of Malta, a doctor of theology, philosophy and canon law, and engraved by Mario Cartaro of Naples. It included an explanatory text in Italian on either sides and contained nine rings. Saliba’s design was re-issued by Cornelis de Jode after 1593 in Latin and without one ring, showing a derivation of de Jode’s twin hemisphere world map as the cartographic portion of the engraving. The subsequent re-issues were all derived from de Jode: Paul de la Houve, Paris c1600; Jean Messager, Paris c1640; Pierre Mariette, Paris c1650; Gerard Jollain, Paris c1681. The present example is a slightly smaller version of the above editions.

The work is based on the Aristotelian and Ptolemaic model for the universe, which placed the Earth in the centre surrounded by nine spheres for the heavens — the five planets, the sun, the moon, the stars, and the primium mobile. Saliba has departed from the classical representation of the Ptolemaic universe by concentrating the planets, the sun, the moon and the stars onto one circle, the penultimate, and by adding the ring of fire, in line with the Renaissance reverence for fire as a purifying tool.