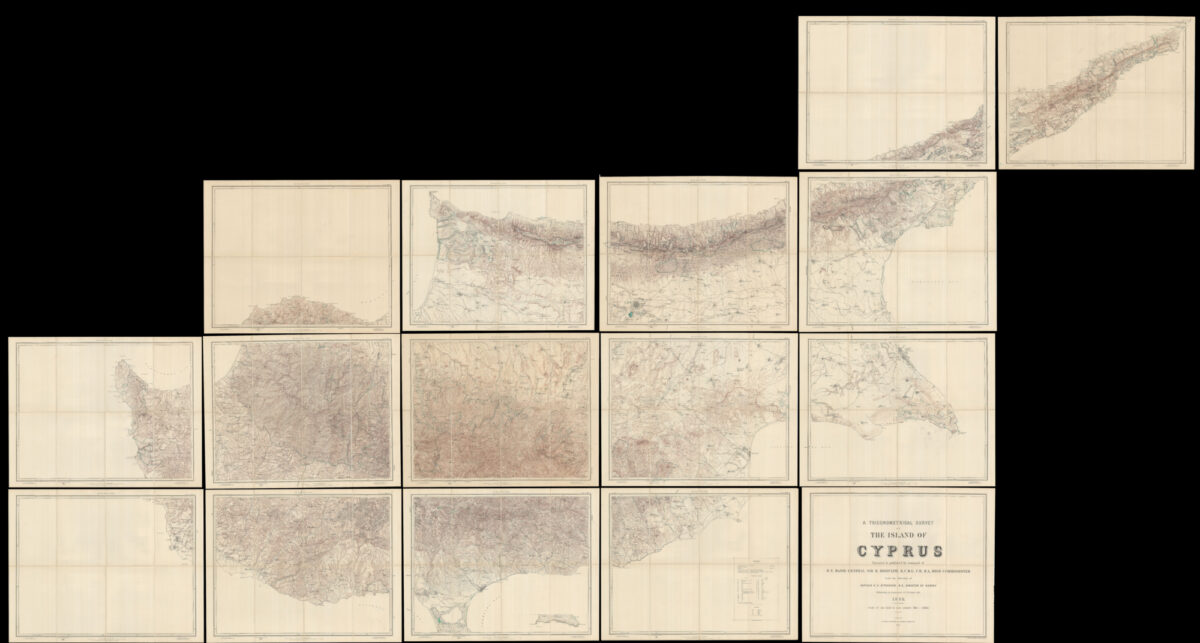 A Trigonometrical Survey of the Island of Cyprus Executed and published by command of H.E. Major General Sir R. Biddulph K.C.M.G. C.B. R.A., High Commissioner under the direction of H.H. Kitchener, R.E., Director of Survey

The Venetian defeat in 1571 established Ottoman supremacy over the island of Cyprus. Throughout the following centuries, the Ottoman authorities enacted the Ottoman Land Code, which meant than all land acquisitions, deeds and transactions had to be officially recorded and surveyed in Ottoman Turkish. Such acts naturally produced a wealth of topographical and cartographical documents in the form of cadastral surveys. And yet of maps showing the island as a whole, the most widely used remained that of Giacomo Franco, printed in around 1570.

When Cyprus became a British protectorate, being exchanged for a tribute to the Sultan in 1878, the new authorities lost no time in ensuring that they had an accurate and up-to-date survey of their new land, not least to ensure the efficient assessment of taxes. As soon as the island’s first British governor, Sir Garnet Wolseley, took up office as High Commissioner, he ordered a map to be drafted immediately. Consequently, a young Lieutenant named Horatio Herbert Kitchener was transferred from Palestine, where he had shown himself highly competent in leading surveys of the Holy Land.

Kitchener headed up the survey of Cyprus until 1879, when disagreements between he and Wolseley, and a lack of funds, caused him to abandon the project. Soon after, however, Wοlseley was replaced by a new governor, Sir Robert Biddulph, who specifically requested that Kitchener return to resume his work on the project. With the survey complete by March 1883, the final map was published by Edward Stanford in 1885. Kitchener’s map of Cyprus remained in use for many years, and many larger scale maps were later based on it.

On a scale of one inch to one mile, the map is a highly detailed depiction of the island, showing district boundaries, cities, towns and settlements, harbours, bays, roads, tracks, telegraph lines, rivers, mountains and woodlands. owns and villages are identified as either Christian or Muslim, and are labelled with both their Greek and Turkish names. Numerous different types of buildings are identified, including churches, monasteries, forts, castles, towers, windmills and huts. These features are identified on the index sheet that accompanied the map.

The present map has numerous manuscript annotations marking areas of land, in green outline. It is unclear what these particular areas mark. It is conceivable that as the map was once in the possession of the Survey Department of the Registrar General Cyprus that they are cadestral, marking ownership of land in the newly acquired territory.

The map rarely appears on the market. We are only able to trace two other examples appearing at auction since the Second World War.

Formerly in the library of the Survey Department of the Registrar General Cyprus.