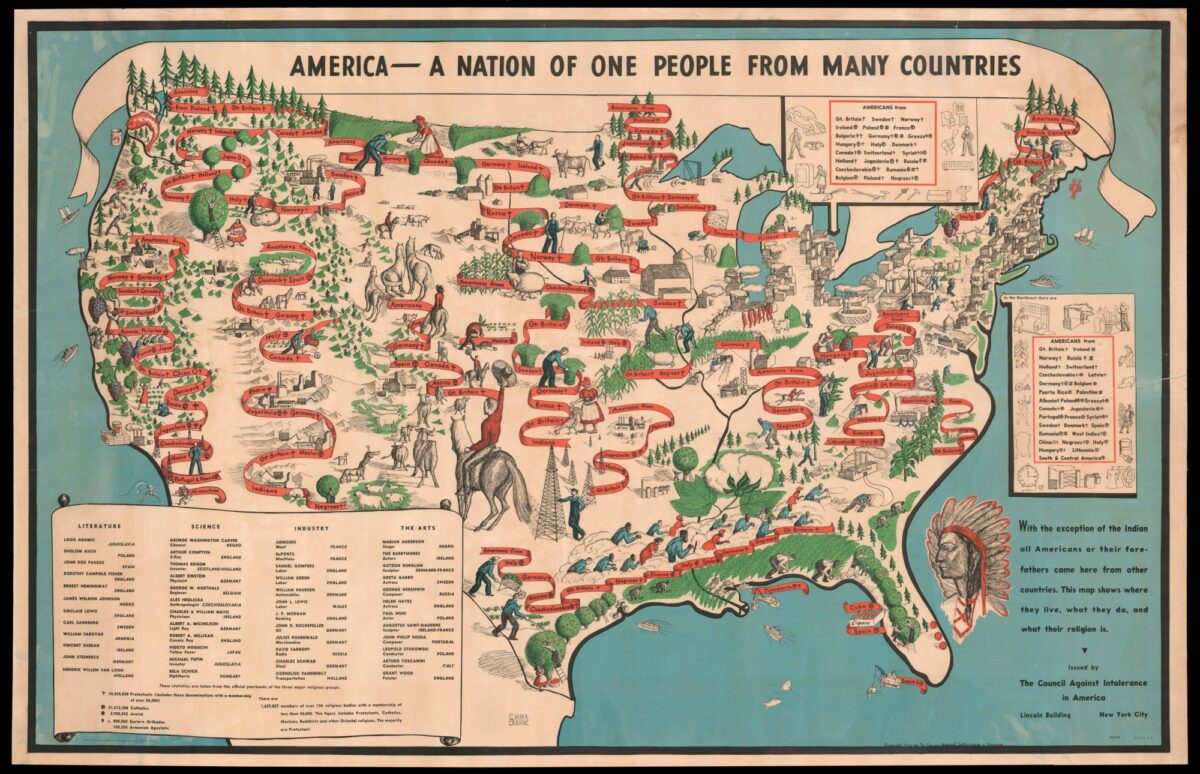 Emma Bourne’s attempt to ​“to counteract the propaganda of racial and religious prejudice, which seeks to divide America”

America — A Nation of One People from Many Countries.

Emma Bourne’s 1940 pictorial map was published in the year prior to the United States’ entry into World War II, when nationalist and isolationist sentiment was on the rise. Bourne takes a politically progressive stance against these feelings of xenophobia and nativism, instead promoting the Council Against Intolerance in America’s mission to encourage ​“tolerance through education,” and ​“to counteract the propaganda of racial and religious prejudice, which seeks to divide America.”

Bourne achieves the Council Against Intolerance’s goal in a number of ways. Red banners snake their way across the country showing where the different groups of immigrants have settled, and illustrating America’s unique level of diversity, both ethnic and religious. Bourne removes all state borders in order to portray America as a unified land, in spite of its diversity. She then celebrates immigrants by picturing them working all over the country in a variety of industries, both agricultural and industrial, thereby portraying immigrants as a vital part of the American economy. This contradicts the harmful stereotype of immigrants as lazy, or as being burdens on society. To drive her point home, Bourne includes a list of prominent Americans in Literature, the Sciences, Industry and the Arts, with each name accompanied by their family’s country of origin. This list includes the likes of Hemingway, John D. Rockefeller, Greta Garbo, and Albert Einstein, who had just recently become a citizen.

Despite her honourable intentions, certain aspects of Bourne’s map undermine her intended mission, at least by 21st century standards. Firstly, Native Americans are not included in this map. Instead, a stereotypical profile of a chief wearing a feathered head-dress floats off the coast of Florida, accompanied by the note, ​“With the exception of the Indian all Americans or their forefathers came here from other countries.” Secondly, the map struggles to represent African Americans fairly. All other immigrants are given a national identity, such as ​“English” or ​“Japanese,” while only African Americans are referred to as a race: she uses the word ​“Negroes.” This serves as a stark reminder of the systematic obliteration of the origins of Africans brought to the U.S. as slaves. Lastly, the map includes an unfortunately stereotypical depiction of African Americans picking cotton in the South. This prompted Langston Hughes, who’s copy of this map is now held at the Beinecke Library at Yale University, to draw attention to the map’s hypocrisy by annotating his with a sketch of a burning cross over the letters ​“KKK,” and with a lyric from the popular song about African American hardship in the South, Ol’ Man River: ​“Tote that cotton – Roll that bale.” 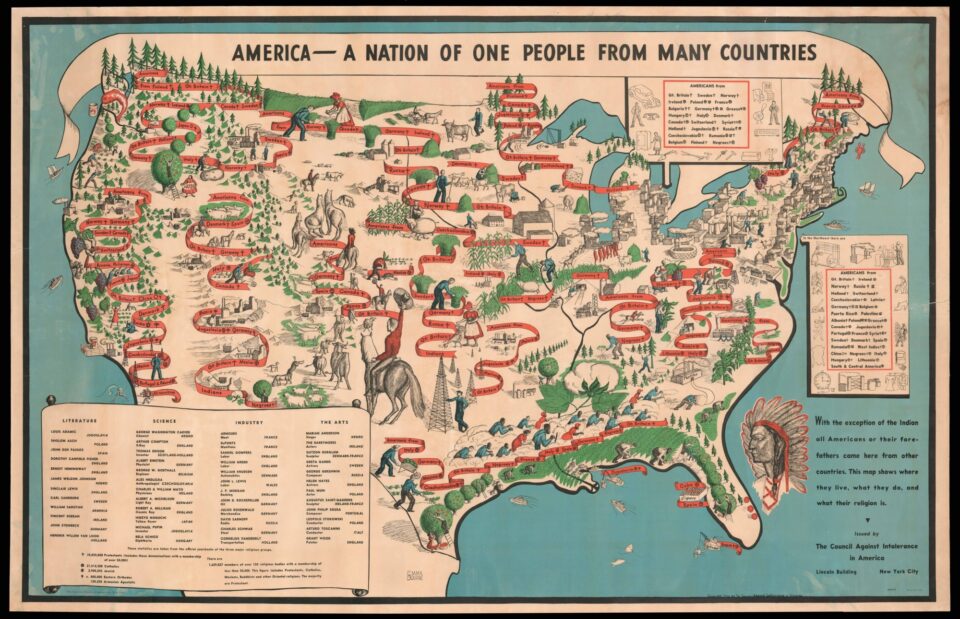