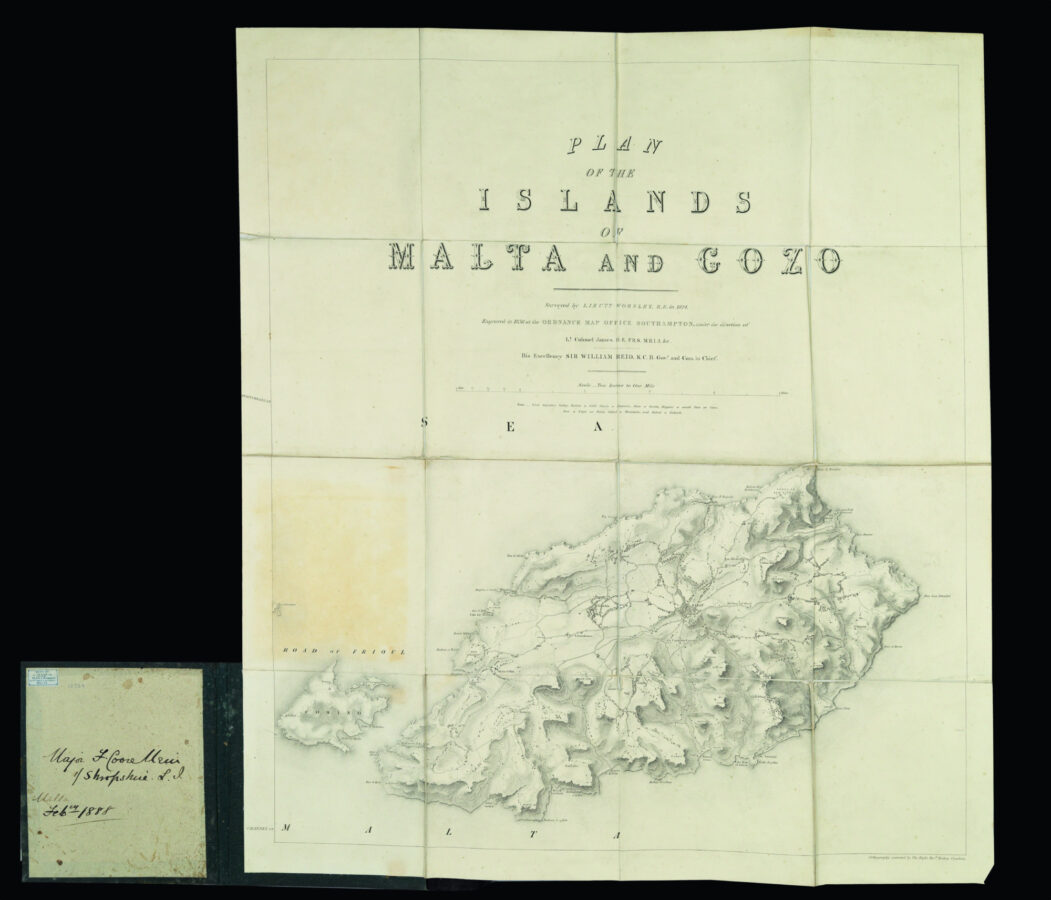 Plan of the Islands of Malta and Gozo Surveyed by Liet. Worsley. R. A. in 1824. Engraved in 1856 at the Ordnance Map Office Southampton, under the direction of Lt. Colonel James, R. E. F.R.S. M.R.I.A. &c. His Excellency Sir William Reid, K.C.B. Govr. and Com. in Chief. Ortography corrected by the right Rev.d Bishop Casolani.

From 1530, the Mediterranean island of Malta had been ruled by the Order of Saint John, which was ousted by the Napoleonic forces at the end of the eighteenth century. The occupied Maltese soon rebelled against French rule, asking Britain for aid, and by the turn of the nineteenth century the French had capitulated, making Malta a voluntary British protectorate. Although Britain was supposed to eventually evacuate the island, they remained, and in 1813 Malta became a Crown Colony.

The following decades saw Britain consolidate its authority over the island, with the Maltese scudo formally replaced by the pound sterling in 1825. The British also made a systematic effort to understand the geography, topography, hydrography and geology of the new colony. Between 1843 and 1856, Lieutenant Spratt defined major units in island’s bedrock sequence, Colonel Sir William Reid promoted publication of a geological memoir, and a map prepared by the 3rd Earl of Ducie on a Royal Engineers topographical base map was published.

Among the earliest British efforts, however, was a cartographical surveying expedition undertaken in 1824 by Lieutenant James White Worsley. Worsley, who later adopted the surname Pennyman as the condition of receiving a large inheritance, surveyed the four islands of Malta, Gozo, Comino and Fillfla, but it was not until 1856, however, that his work was officially engraved at the Ordnance Map Office in Southampton, before being published and sold by Edward Stanford in London.

The map presents the islands’ road system, settlements, hills, harbours, and terrain. The scale bar beneath the title shows that the map’s scale is two inches to one mile, while a note below identifies the local terminology for certain geographic features: ​“wied signifies valley, redum a cliff, ghain a fountain, ghar a grotto, miggiar a small port or cove, ras a cape or point, gebel a mountain, and rabat a suburb”.

The present example of the map was owned by Major Frederick Coore Mein, of the 1st battalion of the King’s Shopshire Light infantry, which was stationed in Malta from 1883 to 1891 and where Mein’s wife is buried at the Ta’ Braxia Cemetery. A further updated edition of Worsley’s map was published by the War Office in 1894.

Major Frederick Coore Mein (1850–1905); inscription to inside upper board.