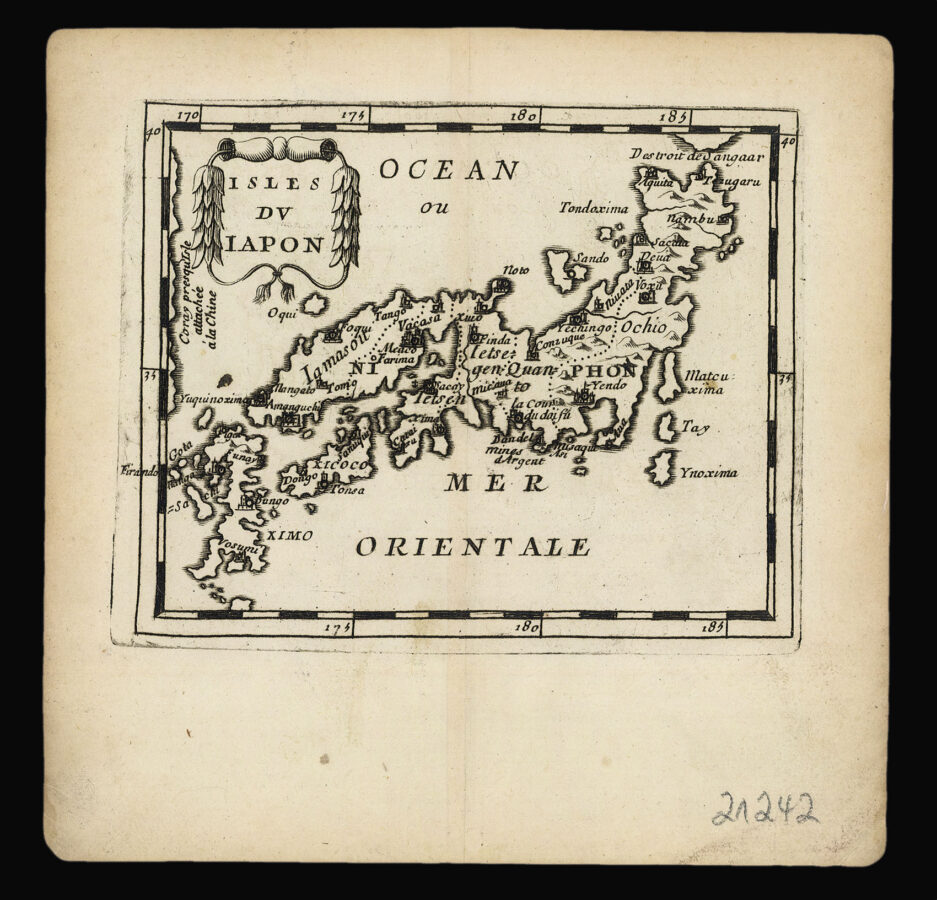 Fourth state of the plate, published in ​‘Le Monde ou La Geographie Universelle’. Du Val’s miniature map of Japan, although simplified, is an improvement on the small map published in 1656, including many new place-names, each with a symbol to indicate towns and a flag for ​‘Yendo’ (Edo; Tokyo), and a circle and castle for ​‘Meaco’, adding the location of a silver mine, ​‘Ocean ou’ in the sea above the islands, mountains next to ​‘Ochio’, ​‘Firando’ is added, and a town symbol next to ​‘Amanguchi’. This issue is distinguished from the previous states by addition of the legend ​‘Coray presque’Isle attache a la Chine’, and ​‘Iesso’ as a place-name is erased.

Hubbard describes five separate states of the map: the earliest with blank versos, later issues with manuscript text on verso.

Du Val (1619–1683) issued only one, very rare, folio atlas, ​‘Cartes Geographiques’ (Pastoureau Duval II). It was initially a collection of du Val’s own maps, with those of other authors, published in 1654, then 1665 and 1667. He was the nephew of the celebrated French cartographer Nicolas Sanson d’Abbeville (1600–1667), mapmaker to Louis XIV, King of France, and responsible for sparking a renaissance in geographical endeavor in France, and laying the foundations for French domination in map production, initiating the so-called ​‘French school of cartography’, a school that was unprecedented in its attention to precision and scientific detail and which discarded much of the decorative embellishments of previous maps as irrelevant. Du Val adopted Sanson’s geographical conceptions, confirming that the center of cartographic innovation had shifted from Holland to France. Du Val too was appointed to the position of ​‘Geographe ordinaire’ to Louis XIV. When he died in 1683, one of his daughters was granted the privilege in 1687 to continue printing his ​‘La Geographie Universelle’, which she did, but only once.