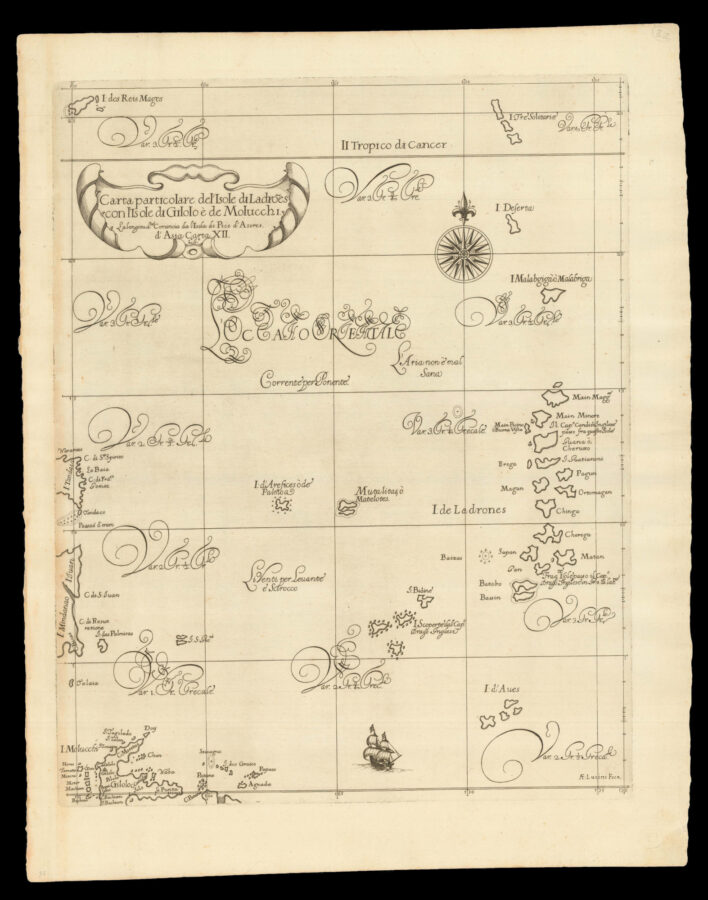 Chart of the eastern coast of Mindanao, the southernmost island in the Philippines, extending eastward to the present-day Marianas Islands, and the legendary Spice Islands of the Moluccas, now Maluku Islands, showing coastal towns, harbours and islands. This is a very early chart of the area by an Englishman, paying tribute to the voyage of fellow Englishman, Francis Drake. At the centre of the chart is a little archipelago to the east of Mindanao captioned ​“I Scoperte dal Cap.o Drago Ingilese” – ​“discovered by the English Captain Drake”, now thought to be the islands of the westernmost Carolines, and including that called by Drake ​“the Island of Thieves”. From these islands, Drake sailed west for thirteen days, reaching ​“four islands”, now thought to refer to the islands and peninsulas at either side of the gulf of Davao.

Even further to the east are the Marianas, then the Ladrones Islands,of which Robert Morden famously wrote in his ​‘Geography Rectified’ (1688), ​“I find nothing memorable,… except their names in some maps”. However, they were of increasing value to the Spanish, who used them as a way-station for their voyages between their outposts in Acapulco and Manila.

In about 1512 the Moluccas were discovered by the Portuguese, who thereafter colonized them and established a trading center on the island of Ternate. Volcanic in origin, the islands are lush and mountainous and important for being the origin of the spices nutmeg and cloves. During the following century, the islands reverted to Dutch control and, during the height of the VOC, a monopoly in the clove trade was established. The British gained a foothold twice in the islands, but they became official Dutch colonies, once again, during the first quarter of the nineteenth century.

From the second edition of ​‘Dell’arcano del mare, one the ​“greatest atlases of the world” (Wardington), first published in 1646 when its author, Robert Dudley, was 73. It was not only the first sea atlas of the world, but also the first to use Mercator’s projection; the earliest to show magnetic deviation; the first to show currents and prevailing winds; the first to expound the advantages of ​‘Great Circle Sailing’ – the shortest distance between two points on a globe; and ​“perhaps less importantly the first sea-atlas to be compiled by an Englishman, albeit abroad in Italy” (Wardington). 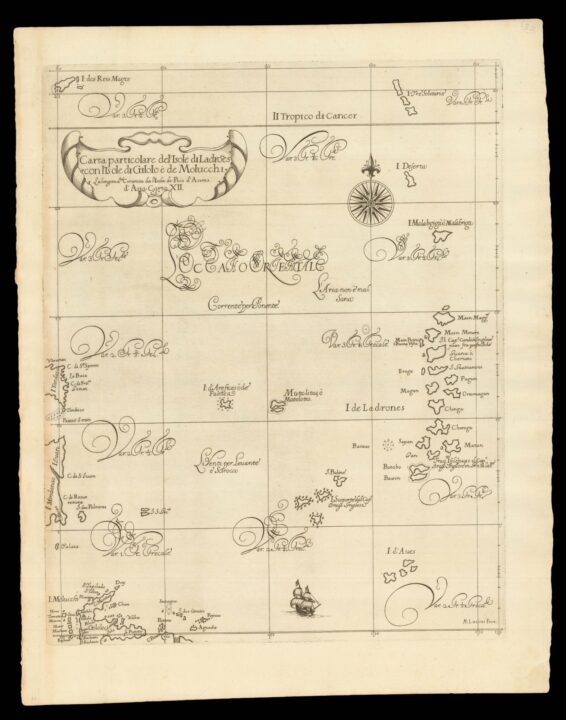