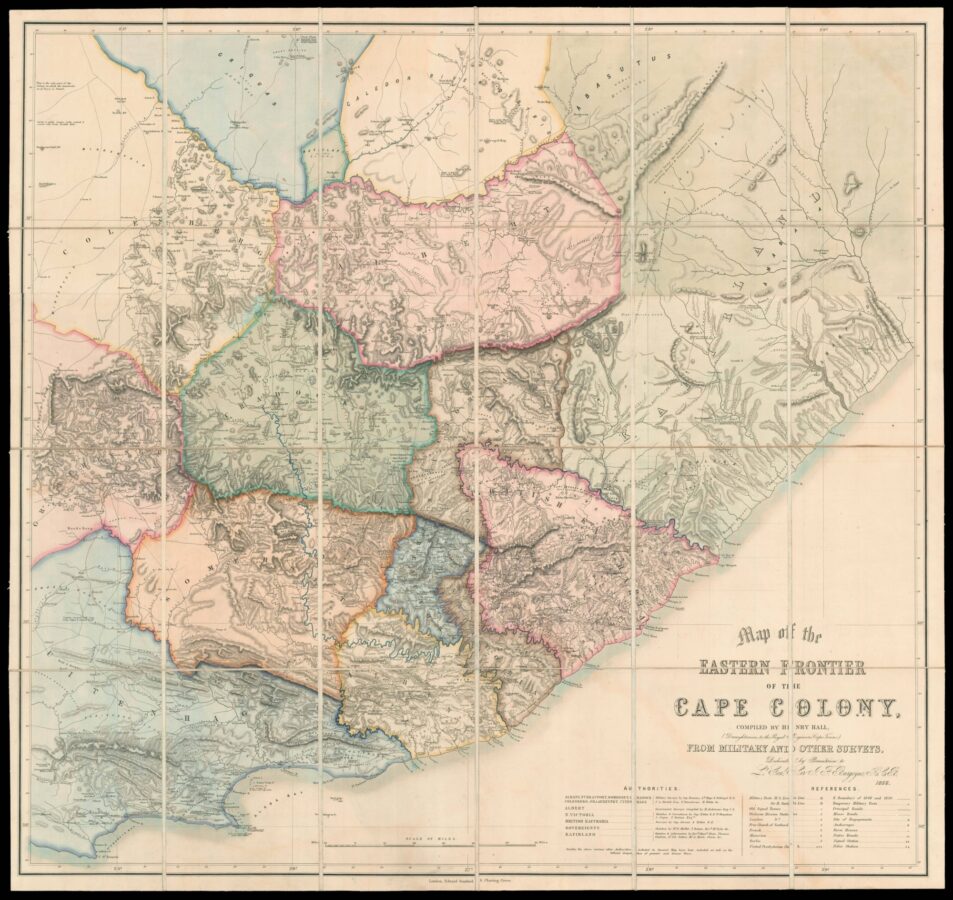 Map of the Eastern Frontier of the Cape Colony compiled by Henry Hall, (Draughtsman to the Royal Engineers Cape Town) from Military and other Surveys, Dedicated by Permission to Lt. Gen. Sir J. F. Burgoyne, K.C.B.

Compiled from local information only, this map of the colony not only surpassed its predecessors in scale and completeness, but also achieved a high degree of accuracy previously absent. The British took the Cape Colony from the Dutch during the Napoleonic Wars in 1806, and had their possession confirmed by the Anglo-Dutch Treaty in 1814. English settlers first arrived in 1820. The colony was volatile. The existing Dutch settlers were aggrieved by the abolition of slavery and the imposition of the English language and system of government; both English and Dutch settlers began to agitate for self-government; and the eastern frontier of the colony came under periodic attack from the Xhosa.

Henry Hall was an Irish military surveyor, who settled in the Cape Colony in 1842. He worked on the Eastern Frontier for the Royal Engineers. The frontier zone was thus periodically surveyed and mapped by military engineers and Hall compiled his map from their information, complemented by his local knowledge, giving a list of surveyors and explorers of the region.

David Livingstone became interested in South Africa after hearing Robert Moffat, a member of the London Missionary Society, speak at a meeting. He became a member of the LMS himself, and made his first journey to the continent in 1840. During his various missions, he became convinced that spreading Christian influence in Africa would encourage legitimate trade instead of slaving. Although the British had abolished slavery in 1833, it was still practised by Dutch settlers as well as Arab and Portuguese traders. Livingstone wanted to initiate an economic revolution in Africa, making it more profitable for the country to export goods than people.

This map was produced in 1856, while Livingstone was making a two-year stay in London. The inscription on the publisher’s label shows that it was sent to Livingstone by the map’s surveyor Henry Hall, possibly because Livingstone had given him information on the area or because Hall knew Livingstone was planning to return to the continent. Livingstone was now an acknowledged expert on South Africa and a well-known explorer, after his discovery of the Victoria Falls and a trans-African expedition. Livingstone resigned from the London Missionary Society in 1857, feeling that his calling was commercial exploration rather than preaching. He was subsequently appointed Consul to the British government in South Africa, and headed the government-sponsored Zambezi Expedition the following year.

The slipcase also contains a letter on Mansion House notepaper from the Lord Mayor of London, Sir Robert Carden, and his wife, Lady Pamela Carden, inviting Mary Livingstone to dinner in 1857. Mary was the daughter of Robert Moffat, who had first introduced Livingstone to missionary work. She was a seasoned explorer in her own right, crossing the Kalahari Desert while seven months pregnant (the first European woman to do so). 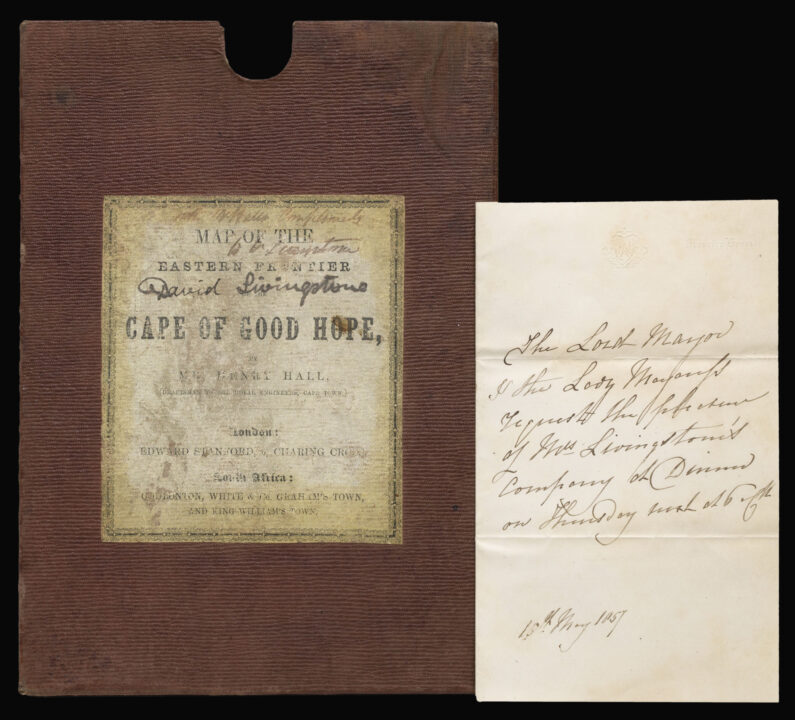