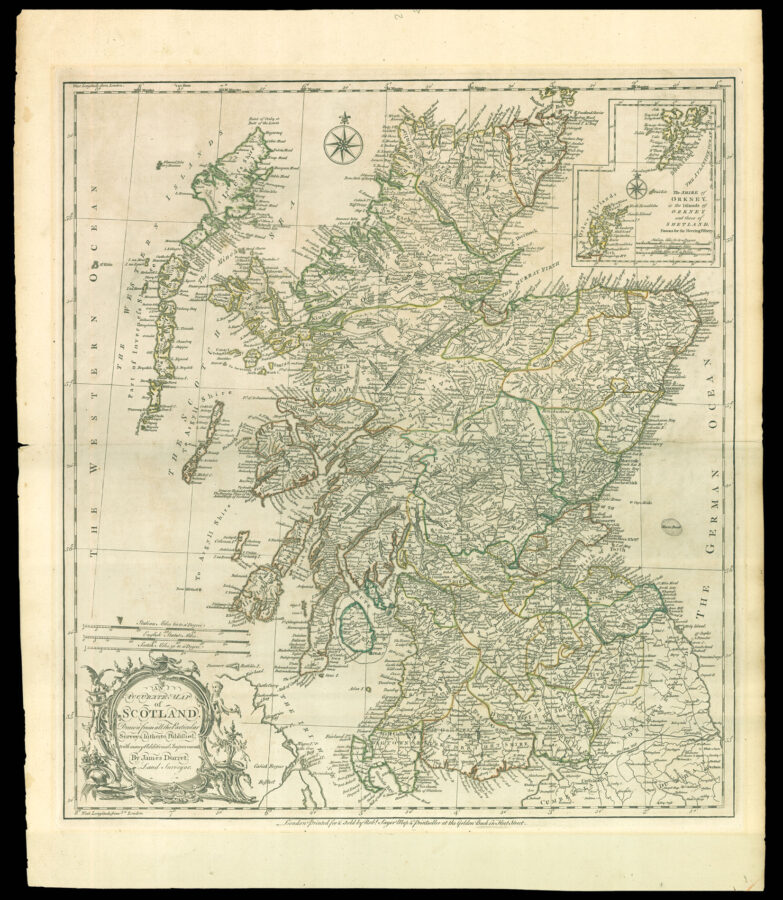 Dorret’s reduction of his large map of Scotland

An accurate map of Scotland.

A reduction of Dorret’s map of Scotland.

James Dorret’s map, published in 1750, would become the standard depiction of Scotland for the next 40 years, used by the likes of Thomas Kitchin, Marcus Armstrong, and Robert Campbell.

Very little is known about Dorrett; he was an Englishman serving as a valet to the Duke of Argyll, who was given the task of mapping first Argyll and then all of Scotland with the Duke’s financial backing. He carried out his own survey, supplementing it with information from William Roy’s Military Survey of Scotland, completed between 1747 and 1755, and with the latest estate and maritime surveys. His authorship of the Argyll estate survey has been established by the correspondence of John Ainslie, a cartographer who would later publish an important nine sheet map of Scotland which would supersede Dorret’s work. Ainslie wrote dismissively that Dorret was ​“first a Barber and got into the Argyll family as one of the Duke’s valet de chambre, and did take an actual survey of the County or Shire of Argyll… [he] took angles through all Scotland and compiled a map of the Kingdom which may be called a Survey by some people”. Ainslie, of course, had every interest in discrediting Dorret’s work in favour of his own.

The map was ​“an immense improvement on anything that preceded it” (Inglis et al.), let down only by the delineation of the Great Glen, Skye and Islay. The Great Glen has a bend in it, despite Dorret having access to sources which would have shown him otherwise. The islands of Skye and Lewis, although not perfect, are drawn with much greater accuracy than Dorret’s predecessors. Dorret drew on the maritime charts of Murdoch Mackenzie to correct the flat top which had been given to the isle of Skye since Willem Blaeu’s maps of the area. He also corrects the shortening of northern Scotland.