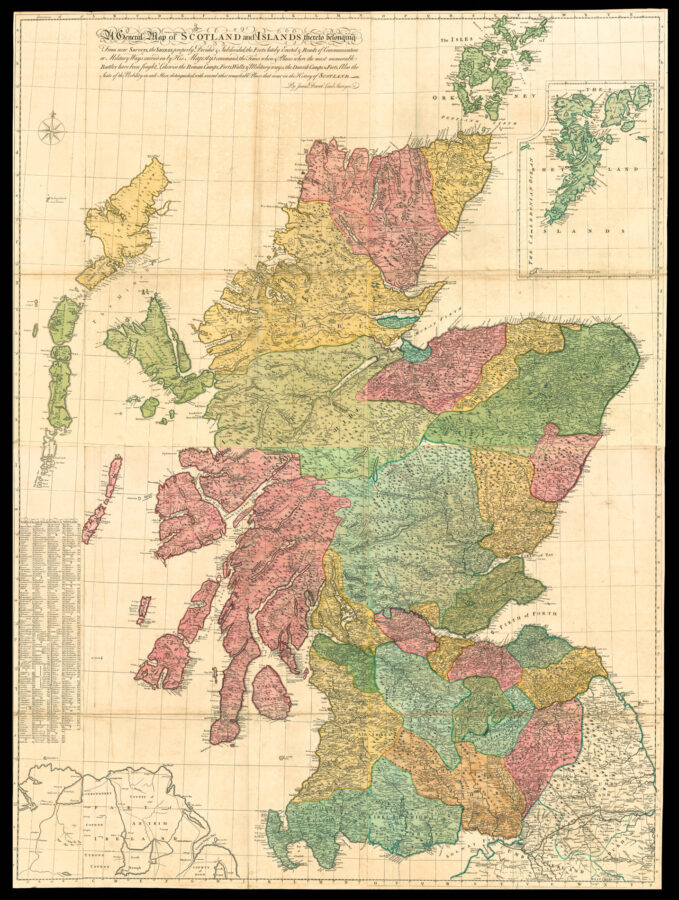 A General Map of Scotland and Islands thereto belonging From new Surveys, the Shires properly Divided & Subdivided, the Forts lately Erected & Roads of Communication or Military Ways carried on by His Majesty’s command, the Times or Military ways, the Danish Camps & Forts, Also the Seats of the Nobility in each Shire distinguished with several other remarkable Places that occur in the History of Scotland By James Dorret Land Surveyor.

James Dorret’s map of Scotland, published in 1750, would become the standard depiction of Scotland for the next 40 years, used by the likes of Thomas Kitchin, Marcus Armstrong, and Robert Campbell.

For the map Dorret used information gleaned from William Roy’s Military Survey, which was being conducted at the time; together with the latest estate and maritime surveys. Dorret himself was responsible for one of the estate surveys, that of his employer the Duke of Argyll. We know this as John Ainslie — the cartographer who in 1789 would publish a map of Scotland upon nine sheets that would supersede Dorret’s work — mentions him in a letter to his friend George Paton. According to the letter, “[Dorret] was first a Barber and got into the Argyll family as one of the Duke’s valet de chambre, and did take an actual survey of the County or Shire of Argyll”. After that, Ainslie continued, he ​“took angles through all Scotland and compiled a map of the Kingdom which may be called a Survey by some people”. A harsh criticism from a man who had every interest in discrediting Dorret’s work.