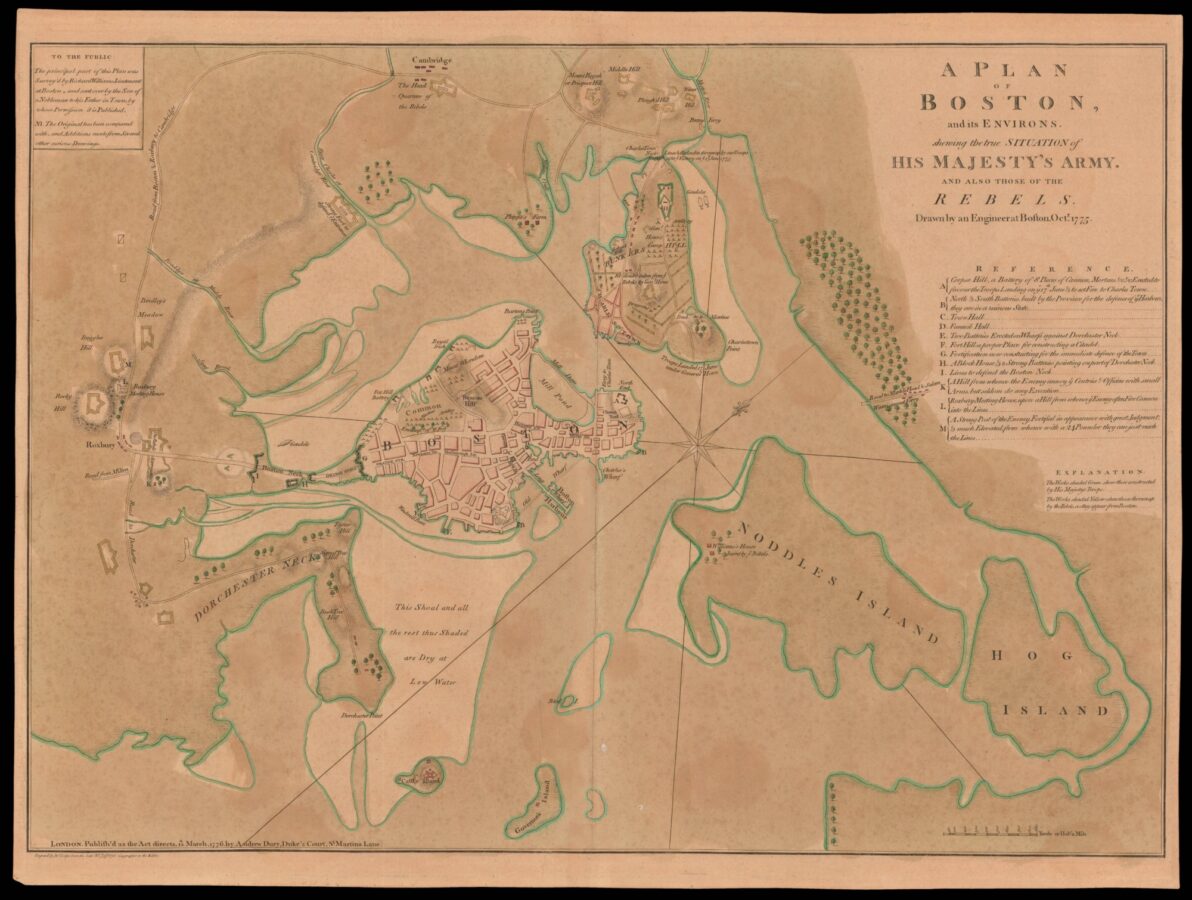 A Plan of Boston and its Environs shewing the true situation of His Majesty’s Army and also those of the Rebels. Drawn by and Engineer at Boston. Oct.r 1775.

A plan of the Siege of Boston, vividly encapsulating the events in the opening phase of the Revolutionary War, based on a survey by a British officer present during the Siege, who has made notes referring to fortifications, the position of troops, the Battle of Bunker Hill, and the siege from April to October of 1775. The British troops and their fortifications are depicted on Boston Common, showing the encampment of the 6th Regiment. The representation of troops at Charlestown and Bunkers Hill tries to put the desperate British situation in better light, showing where the ​“Troops Landed 17 June under General Howe,” a ​“Redoubt taken from ye Rebels by Genl. Howe,” and at Charlestown Neck the ​“Lines & Redoubts thrown up by our Troops after ye Victory on ye 17th June 1775”.

The American troops encircle the town, with the ​“Headquarters of the Rebels” at Cambridge and American installations at Roxbury, and the mouth of the Charles. The key lower right includes a note acknowledging the strength of the American opposition: ​“a Strong Post of the Enemy, Fortified in appearance with great Judgment”.

Following the Battle of Lexington and Concord in April of 1775, the British retreated into Boston and were soon surrounded by militia, although they maintained control of Boston Harbour. On 16 June, having learned that the British intended to occupy the surrounding hills, militiamen under Colonel William Prescott fortified Breed’s Hill, near Bunkers Hill. The British attacked the next day and prevailed, but not before losing some 1,000 men. The situation then settled into a month-long standoff, with occasional small actions followed by the installation on Dorchester Heights of cannons captured at Ticonderoga and brought overland by Henry Knox, forcing the withdrawal of the British in March 1776.

​“The principal part of this Plan was Survey’d by Richard Williams, Lieutenant at Boston and sent over by the Son of a Nobleman to his Father in Town, by Whose Permission it is Published”. Commissioned into the Royal Welsh Fusiliers in August 1768, Lieutenant Richard Williams joined British forces in Boston in June 1775. Williams kept a journal during this period. He also painted a watercolour panorama of Boston which is owned by the British Library. Williams died of unknown causes in Nova Scotia in May of 1776.

Nebenzahl notes that the map ​“clearly reveals the situation of the siege of Boston by the Continental army nine months after Washington assumed command”.