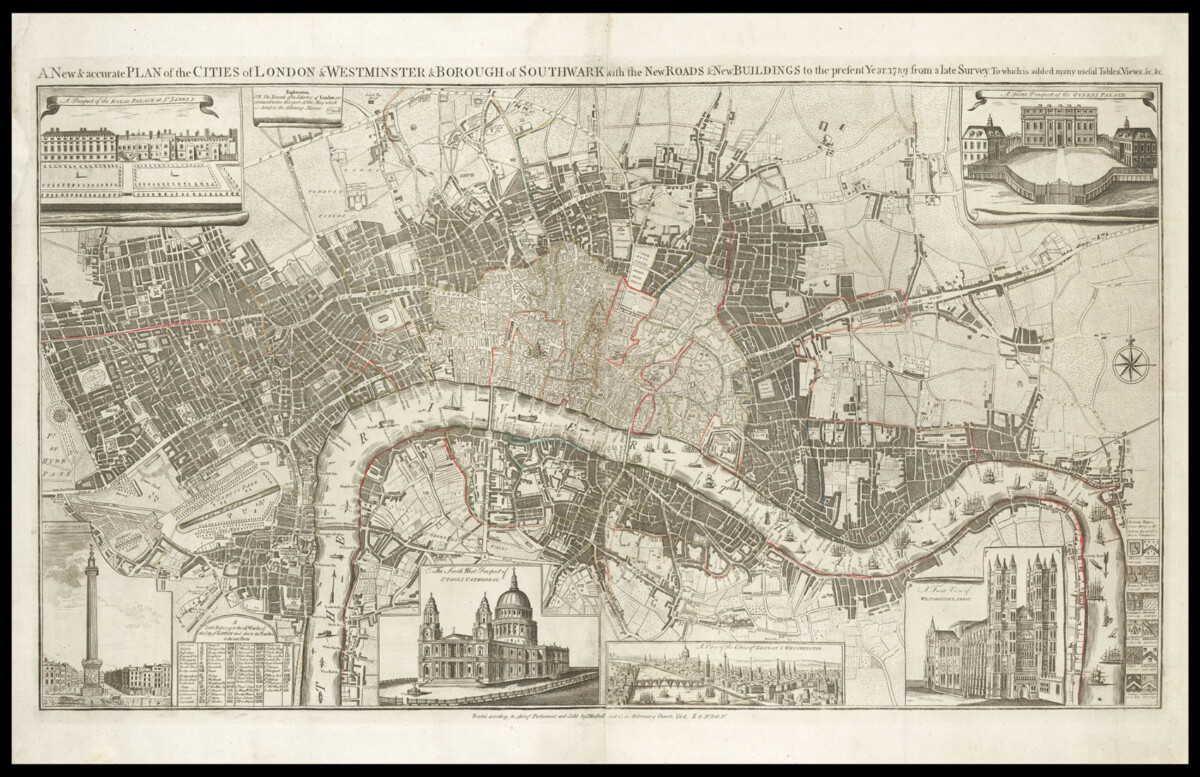 A New & Accurate Plan of the Cities of London & Westminster & Borough of Southwark with the New Roads & New Buildings to the present Year 1789. To whch is added many useful Tables, Views, &c. &c.

The plan was first published by Cluer Dicey in 1765. By the time the present map was printed, Dicey had passed away and the plates had come into the hands of John Marshall, with whom Dicey had had a long and fruitful partnership. There are several vignette views, most notably the view of the Cities of London and Westminster looking upstream, and a view of Buckingham Palace — named the Queens Palace. The Palace was often called such throughout the eighteenth century due to it being the private residence of Queen Charlotte, the wife of George III; the majority of state business was carried out at St James’s Palace. On the plan the City is marked out by stippling, with the parishes and wards marked by roman numerals; many of the most important buildings are shown pictorially, and the Thames is packed with ferrymen, barges, and sailing vessels.

The Diceys were well known as publishers of ​‘chapbooks’, cheap pocket-sized pamphlets which were circulated through a network of chapmen — hawkers and pedlars who would travel around England, attending markets, fairs and so on, offering the books, ballads, portraits, maps and topographical prints.

Interestingly, they did not restrict themselves to the printing business, but were also involved in patent medicine, becoming one of the largest distributors of ​“Daffy’s original and famous elixir salutis”, advertised as ​“the choice drink of health, or, health-bringing drink. Being a famous cordial drink, found out by the providence of the Almighty, and (for above wenty [sic] years,) experienced by my self and divers persons (whose names are at most of their desires here inserted) a most excellent preservative of man-kind. A secret far beyond any medicament yet known, and is found so agreeable to nature, that it effects all its operations, as nature would have it…“