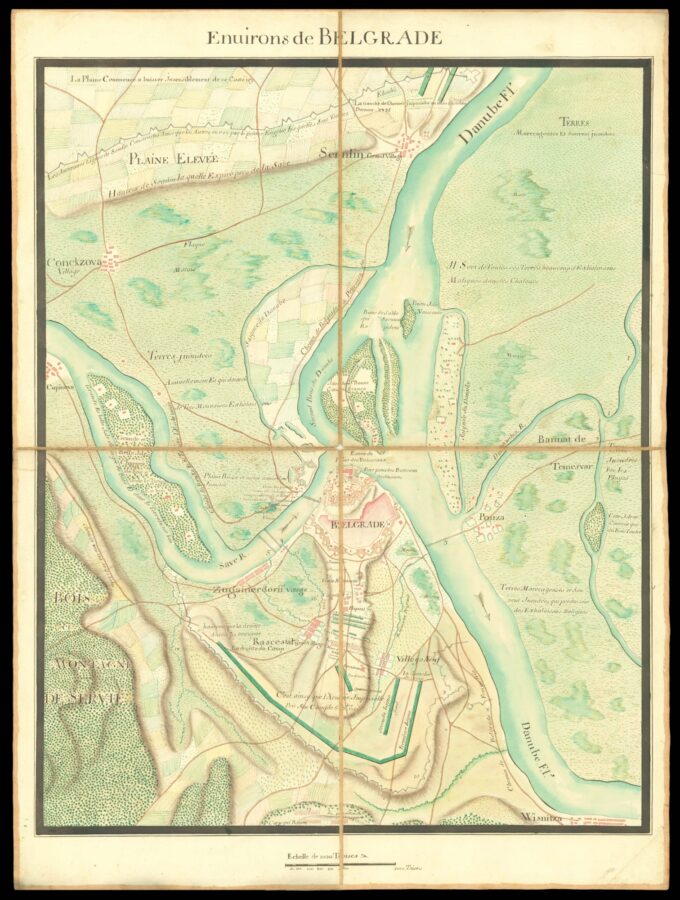 Detailed manuscript plan of the Siege of Belgrade

Detailed manuscript plan of the Siege of Belgrade of 1717, during the Austro-Venetian-Ottoman War of 1714–1718.

The plan shows the fortifications of Belgrade, the lines of investment of the Austrian army, and the Austrian camp.

On May 13, 1717 Prince Eugene left Vienna, with his troops from Futtak. Even before the troops were assembled, on May 21, Prince Eugene began his march toward Belgrade with about 70,000 men, reinforced by 6,000 Bavarian and other Austrian troops stationed in the Banat for a total of about 100,000 men. In addition, he command the Danube flotilla, consisting of about fifty boats of various types and ten naval vessels armed with light artillery. Eugene wanted to reach the city and begin the siege as soon as possible before any Ottoman troops would reinforce the city. The biggest problem was that the fortress could not be attacked from the south, and progress could only be made after crossing the Danube and the Sava. He chose the direct route, by crossing the Sava river, although, on this side, the defense of the fortress was the strongest. On the advice of one of his generals, he chose to return across the Danube, surprising the Ottomans who did not expect the enemy to cross the river at that point. The Austrian army managed to cross almost intact between June 15 and 16. Eugene deployed his artillery while the Imperial troops began digging trenches, both in front of the fortress and at the rear of the army. The Ottoman defenders in Belgrade numbered 30,000 men. Prince Eugene was informed that an Ottoman army had been sent to relieve Belgrade. This army arrived on July 28. However, instead of taking action against the besiegers, they also began to dig trenches. Prince Eugene’s troops were caught between the fortress and the relief army. Because of losses to cannon fire as well as malaria, the strength of the Austrian army was slowly diminishing.

The situation became perilous because the Ottomans wanted to let the enemy wear themselves down in a long siege. While the situation was rather worrying for the imperial troops, on August 14, Belgrade was suddenly shaken by a powerful explosion: a mortar shell struck the powder magazine inside the fortress and 3,000 defenders were killed in the explosion. At this time, Eugene ordered an attack on the Ottomans for the next day: at midnight, on August 16, the attack began with infantry in the center and cavalry on the wings. Apart from those men necessary to defend the trenches facing the fortress, the entire army was involved in the attack.
The night attack surprised the Ottomans; after the first hours of fighting, while the sun rose, the Ottomans had predicted an opening in the center of the Austrian attack and attacked in force, before a counterattack by the Austrian cavalry, led by Eugene himself, not only pushed them back but took the trenches, throwing the Ottoman camp into turmoil and causing the soldiers to flee. After 10 hours of fighting, the battle was won by the Austrians. The garrison of Belgrade surrendered after the defeat of the army in exchange for safe passage from the city. Ottoman losses were approximately 20,000 men and a large amount of equipment, ammunition and artillery.