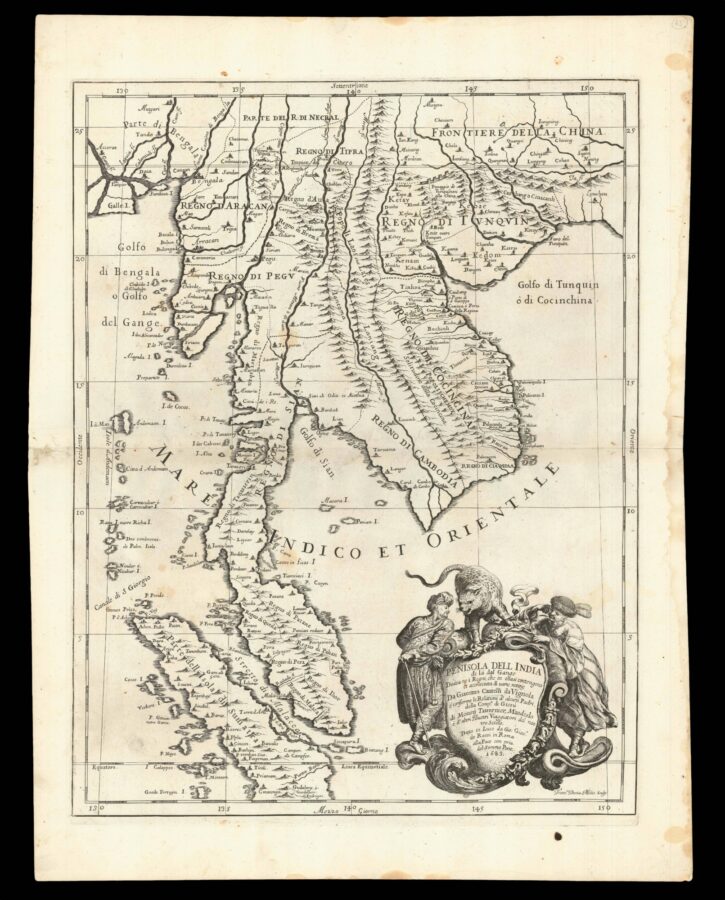 Focused on the Malay Peninsula, the map delineates the individual sultanates, and shows ​“Sincapura” as an island. The map extends to include the Bay of Bengal, Cambodia, Cochinchina, southeast China and Sumatra. Where the island of Borneo should be, is a large and elaborate title cartouche.

Giacomo Cantelli da Vignola (1643–1695) was an Italian cartographer and engraver. He joined the retinue of Count Rinieri Marescotti, and whilst travelling with the Count, met the publisher Giovanni Giacomo de Rossi, who became his partner. He eventually became court geographer to Reggio Francesco II d’Este, Duke of Modena.

Founded in 1633, the de Rossi printing press was the most important and prolific in Rome during the seventeenth century. Just before the death of its founder, Giuseppe de Rossi (1570–1639), it was inherited by his son Giovanni Giacomo (1627–1691), under whom it produced some of its finest work. These included the etchings of several influential artists, such as Pietro Testa, Giovan Francesco Grimaldi and Giovanni Benedetto Castiglione, as well as a wealth of cartographic material.

From the mid 1680s, Giovanni Giacomo published his first atlas, the ​‘Mercurio Geografico’, in partnership with his adopted son Domenico de Rossi, who would ultimately become best-known as a sculptor. The first edition consisted of 30 maps dated from between 1669 and 1715, generally derived from the work of Cantelli da Vignola, the important seventeenth century cartographer whose fine style of bold engraving would have great influence on Vincenzo Coronelli.