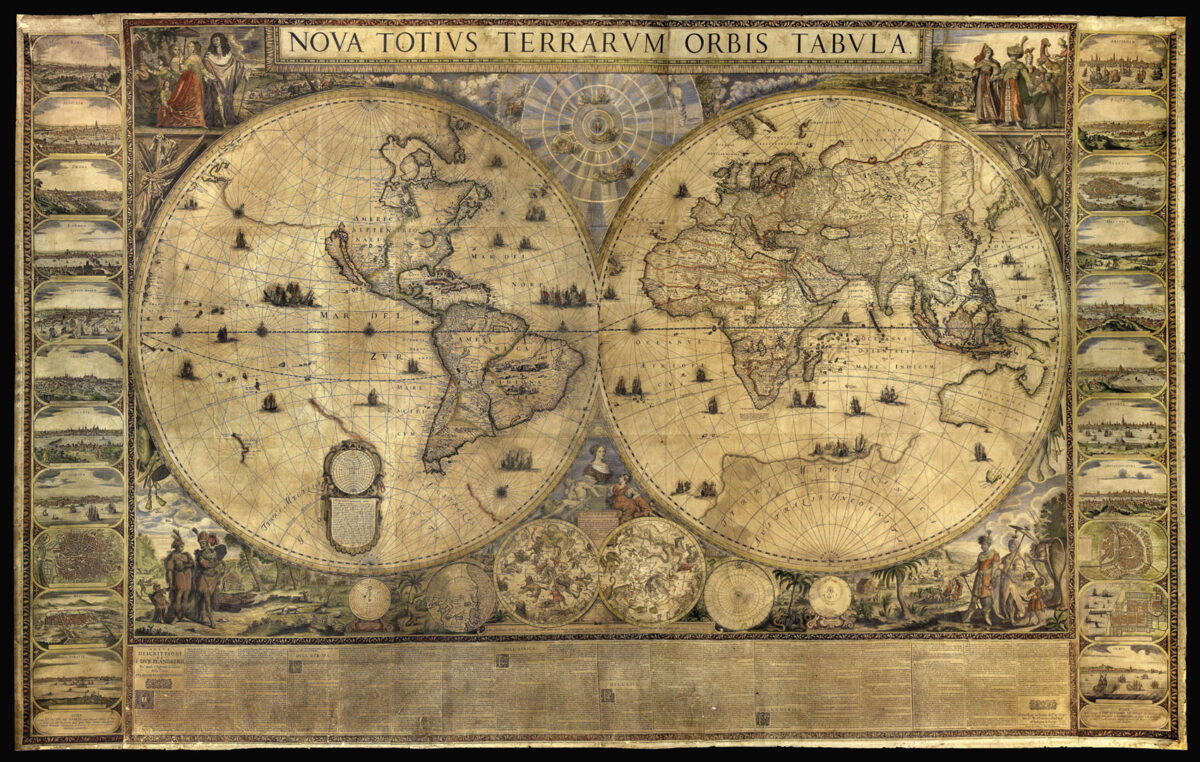 In the Jubilee year of 1675 De Wit’s large wall map of c1660 was redrawn on twelve sheets and published in Rome by Giovanni de Rossi under his latinised name Jacob de Rubeis. The engraver was Georgio Widman.

The size of the map approximates to that of De Wit’s earlier twelve-sheet map and the geographical correspondence is very close. De Rossi has added the tentative coastline of Terra Jessi between North America and Japan and has brought back, in part, the coastline of the Antarctic continent. There are two other changes which suggest an additional source: the large island in Hudson’s Bay is now divided into three and the Desertum Amo (pocked to resemble sand) has been added in northern China. The positioning and style of the many small ships in the sea have been directly copied from De Wit, and there are similar ornate decorations around the hemispheres. The corner scenes depict personages of Europe, the Orient, Africa and South America against typical landscapes and hunting scenes. There is a large solar diagram at the top between the two main hemispheres: at the bottom are two celestial hemispheres, north and south polar projections, and circles representing the hypotheses of Ptolemy and Tycho Brahe. The design and engraving are of the highest standard.

Just above the two celestial hemispheres is a bust of Christina, Queen of Sweden who resided in Rome from shortly after her abdication in 1654 until her death in 1689. The main imprint is in a long panel below the hemispheres. At each side the map is flanked by eleven town views
(making twenty-two in all, these include Rome, Seville, Prague, London, Copenhagen, Cracow, Cologne, Lisbon, Madrid, Suratte, Amsterdam, Paris, Venice, Gdansk, Stockholm, Frankfurt, Antwerp, Constantinople, Moscow, Jakarta, Ormus) and below the map is text in Italian concluding in Latin: Romae Formis Io Iacobi De Rubeis.