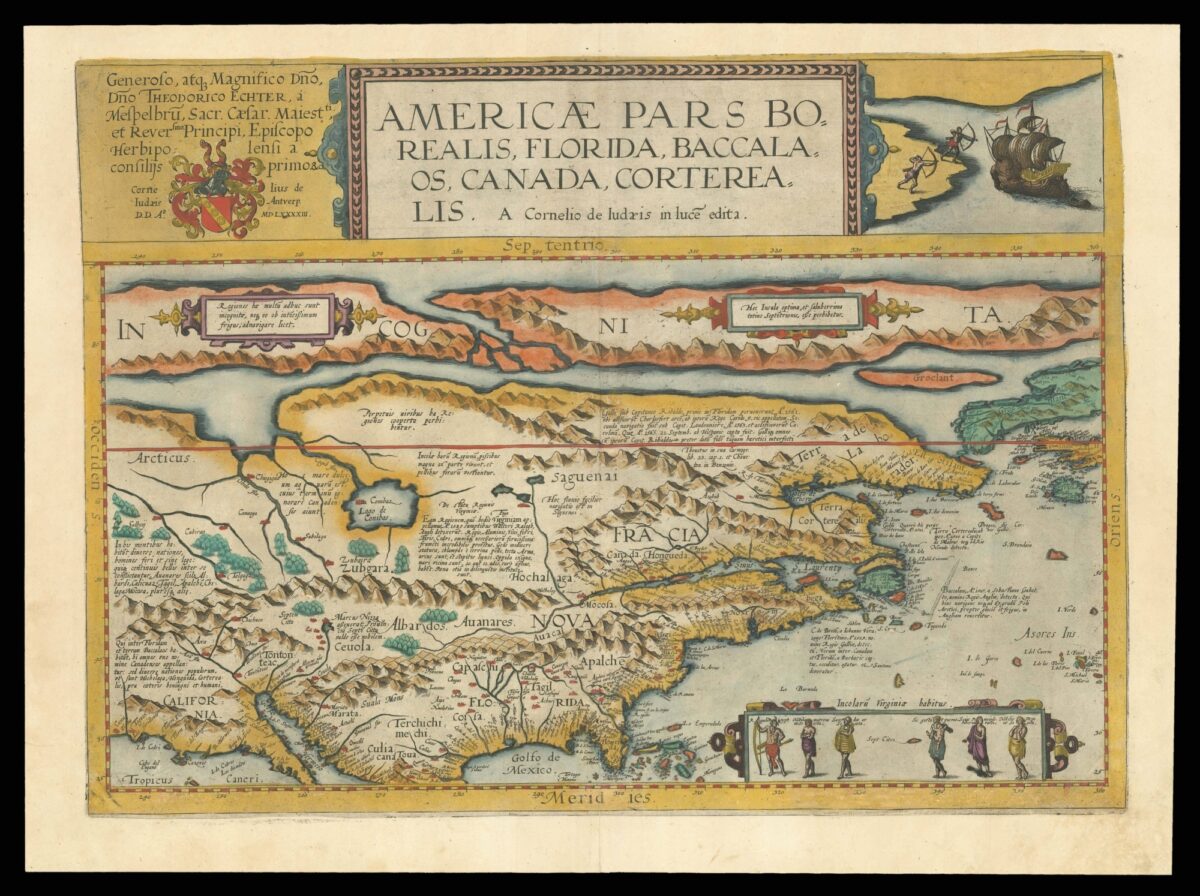 A rare and early map of North America in full original colour, published almost exactly a century after Columbus’ discovery of the continent.

In 1578, Gerard de Jode (1509–1591) published his most important work, the atlas ​‘Speculum Orbis Terrarum’, which contained 65 maps accompanied by corresponding Latin text by Daniel Cellarius. It was designed to compete with Abraham Ortelius’ atlas, ​‘Theatrum Orbis Terrarum’, which had been published eight years earlier, and to break Ortelius’ monopoly. De Jode failed to do so, despite the accuracy, clarity and artistry of his maps. After his death, however, his son Cornelis (1568–1600) continued his father’s publishing business, and in 1593 produced an enlarged edition of the ​‘Speculum’ called ​‘Speculum Orbis Terrae’, which contained several new maps. Alongside a twin polar view world map, and the first map devoted to the west and northwest coasts of Africa, this work presented some of the earliest cartographic representations of America.

De Jode’s maps of North and South America were the first Dutch maps to focus specifically on the two continents; previously North America had been the subject of only one other map, Forlani’s 1565 depiction. De Jode followed this earlier example for some of the content of the present map, but largely drew on Petrus Plancius’ eighteen sheet world map for his American cartography. The majority of the place names, unsurprisingly concentrated around the eastern coastline, are also taken from Plancius’ work. The cartography has been updated, however, with information taken from Theodore de Bry’s ​‘Grand Voyages’, which was published three years earlier and contained new maps of parts of America. There are nonetheless some significant errors on De Jode’s map; it takes only a quick glance to see that the entire continent has been attenuated in length. This appears to be the result of several key misplacements, including Chesapeake Bay and Virginia, which are both too far north. East of Florida, the Caribbean islands are shown with impressive accuracy, while to the north, de Jode has included the fictional ​“Lago de Conibas”, connected to the hugely exaggerated north-west passage

The map is embellished in the maker’s distinctive style, with mountains, woodlands and cities depicted pictorially, and explanatory Latin annotations across the image, some housed in decorative cartouches. In the upper right corner a simplistic vignette shows the attack on Martin Frobisher’s ship by indigenous Americas. Directly beneath this in the lower corner is a cartouche housing six figures: the different types of Americans one might meet in 1593. These include a helmeted priest, a half-dressed ​‘noble woman’, and the ​‘regular type’, armed with bow and arrow. To the left of the title in the upper corner, the map is dedicated to Theodor Echter, a Dutch bishop.

Because of its poor sales, only one edition of the ​‘Speculum’ was produced, making the maps within a rarity. The present example has printed text to the verso, showing that it was contained within the atlas rather than published as a separate sheet, meaning that it is even more rare.