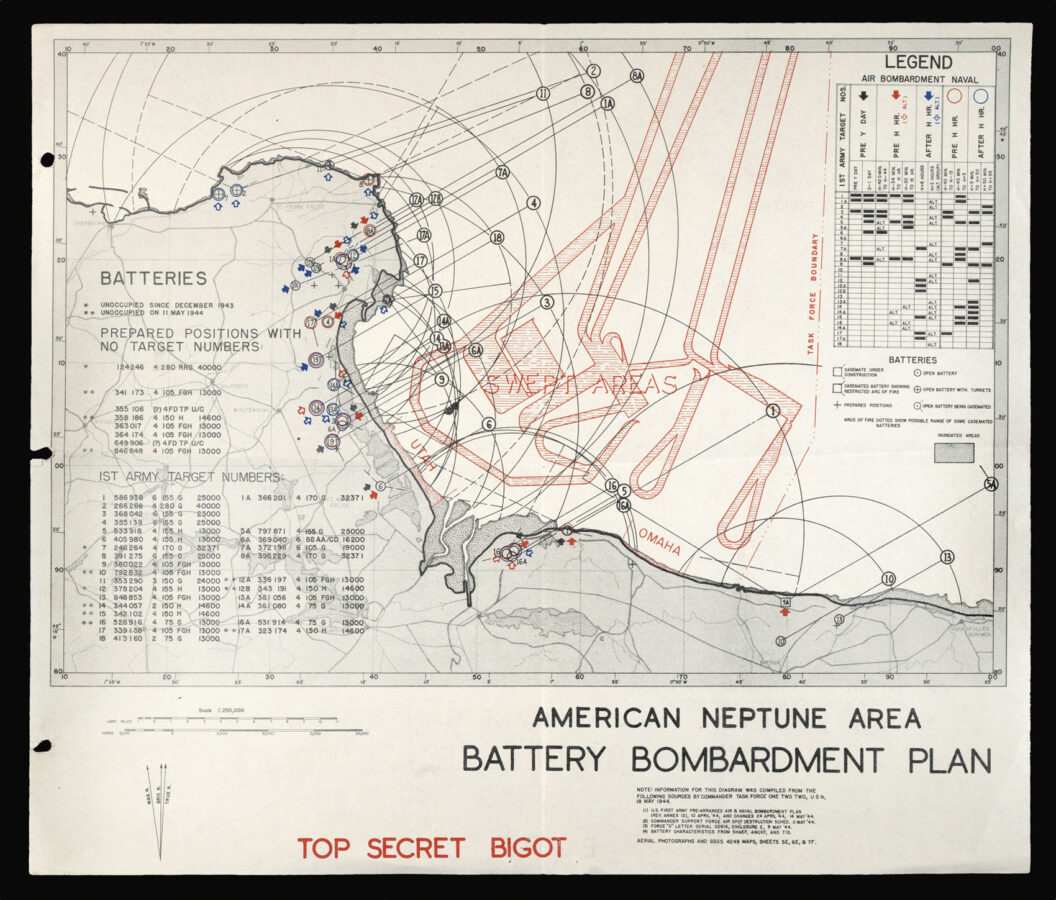 Overprinted in green ink on verso ​“Folio N”, and ​“IMPORTANT NOTE: Guns in Battery 8A reported moved around 12 May, new location unknown”.

The map, produced as part of the strategic planning for Operation Overlord, and the D‑Day landings of 6 June 1944, examines 18 defending German battery positions along the area of coastline between Cherbourg and Courseulles sur-Mer in Normandy, France. Its focus is the two main beaches of ​‘Utah’ and ​‘Omaha’ where the American troops were to land, and their approach from the English Channel, where ​‘Swept Areas’, which had already been cleared of mines, are shown in red. The complexity of the construction of each battery position is identified, and is noted as anything from ​“under construction”, to ​“prepared position”, to ​“open battery with turrets”. The predicted and actual firing range of each position is plotted on the plan, and the corresponding response from the Allied Naval and Air Forces, outlined in a ​“Legend” upper right. The timing and duration of bombardment, that each position could be expected to endure, is measured in minutes, before, during and after ​“H‑Hour”, ​“Y‑Day” and ​“D‑1 Day”. Many of the German positions that have now become iconic names in D‑Day history, are shown on the map: ​“Pointe du Hoc”, ​“Sainte-Mere-Église”, and ​“Maisy Battery”.

The information shown in the map was, by necessity, up-to-the-minute, as evidenced by the ​“Important Note” on the verso, and the dates of the reports and aerial sorties from which it was compiled.

Commander Task Force One Two Two, or United States Twelfth Fleet, commanded by Rear Admiral Alan G. Kirk, who commanded D‑Day’s Western Naval Task Force and the Utah and Omaha Beach landings, prepared the map on 18 May 1944, from sources including aerial photographs, and pre-existing plans. These included the U.S. First Army pre-arranged Air and Naval Bombardment Plans from 10 April and 14 May 1944; and the Commander Support Force Air Spot Destruction Schedule from 11 May 1944.

This map is labelled in bold red ink ​“TOP SECRET BIGOT”, identifying it as being only for the eyes of those with top security clearance. ​‘Bigot’ was used to designate the highest level of military secrecy, and consequently, those personnel cleared to know details of Operation Overlord, known as the ​“Bigot list”, and the people on it, as ​“Bigots”.

Operation ​‘Overlord’, was part of a large strategic plan designed to bring about the defeat of Germany by heavy assaults on German-occupied Europe from the United Kingdom, the Mediterranean and Russia. The outline of the Operation ​‘Overlord’ plan was completed in July 1943, and the particular assault on the Normandy beaches from the UK and the English Channel elaborated under the title of Operation ​‘Neptune’ in February 1944. ​‘Neptune’ involved preparatory aerial and naval bombing of German coastal positions, before the historic landings of D‑Day itself: the largest amphibious operation in history, and a pivotal moment in the course of the Second World War which eventually resulted in the liberation of western Europe from German occupation.

Rare. No examples of this particular plan have been offered previously at auction; an institutional example is illustrated in Lewis’ ​‘Omaha Beach: a Flawed Victory’, 2003.