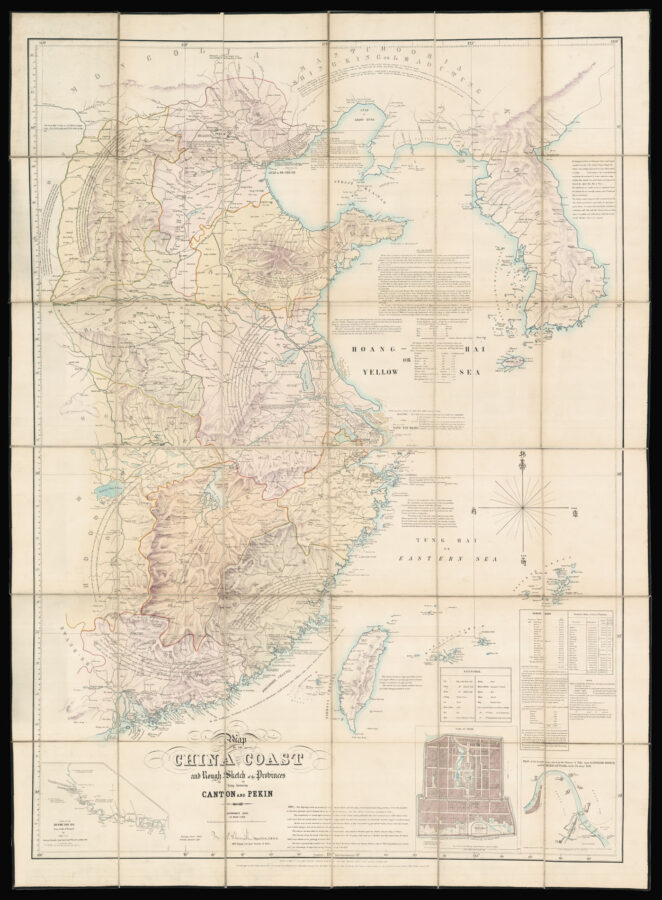 “Cowardly, cunning, void of truth, and they are drunkards”

Map of the China Coast and a Rough Sketch of the Provinces lying between Canton and Pekin.

A rare map of China produced for British Commanders in the Second Opium War.

The map stretches west to east from Hubei Province to Korea and north to south from Laioning Province to Guangdong Province.
It was produced during the Second Opium War (1857–1860), and was ​“intended for the use of Commanders and other officers of the troops proceeding to China”. The note goes on to mention the sources used to compile the map: Horsborough’s chart of the China Coast of 1835 (updated to 1856) and Walker’s chart of the coast from the Canton River to the Yang-tse-kaeng (Yangtze) River. Although James states that the map is not intended to supersede the maritime charts as it fails to record shoals and rocks and other visible and hidden dangers. The interior is furnished from Arrowsmith’s map of China which, he states, is taken largely from the French Jesuit map i.e. the Kangxi atlas the great early eighteenth century survey, which was commissioned by the Emperor, and met wider European acclaim when Du Halde published his description of China in 1735. The majority of the text is taken from the Karl Gutzlaff ​‘China Journal of Three Voyages along the Coast of China in 1831, 1832 and 1833’; Horsbrough’s charts of the China Sea, and Captain Sherard Osborn’s, ​“Notes Geogrpahical and Commercial”, a paper presented to the Royal Geographical Society in 1859. Osborn was captain of H.M.S. Furious a 16 gun steam powered paddle wheel frigate, which had seen action on the Yangtze river during 1858.

The map is replete with the text relating to the local inhabitants, the country or provinces’s produce, and geography. The Koreans ​“are middle sized, of a symmetrical form, & fine featured but are cowardly, cunning, void of truth and they are drunkards”. The Chinese from the province of Che-keang (Zhejang) fair a bit better and are said to be, ​“very ingenious of the most polished manners and perhaps superior to all other Chinese”.

The map incorporates a detailed description and inset chart of the Pei-Ho (Hai) River, which leads to the cities of Tient-sin (Tianjin) and the capital Pekin (Beijing). The river would be the key theatre of operations in the following year, when a combined Franco-British forces captured Tianjin, and destroyed and looted the Summer Palace. In fact the text states: ​“A splendid paved road exists between Tient-sin and Pekin [and] if at any future time, military operations against Pekin be necessary, the months of April, May, and June would be the best to employ”. The text goes on to provide information upon the exact landing place for troops near the capital from where ​“the fall of Pekin would be assured with no great difficulty”. The text also suggests suitable attire to be worn during the campaign. To the bottom right is a plan of Pekin, together with a plan of the attack on Fort Taku, of 1859. The fort guarded the entry to the Hai River, and was hence of huge strategic importance. The attack of 1859 was a disaster for the Anglo-French force, who underestimated the strength of the Chinese, hence the naming of the attack by the Chinese as treacherous, (which is a bit rich considering the British and French were the invading force). Above the plan of Taku fort is a table providing information upon the Chinese army, its constitution, and population size.
Rare. We are only able to trace two institutional examples of the work: the BnF, and the Beinecke Library.