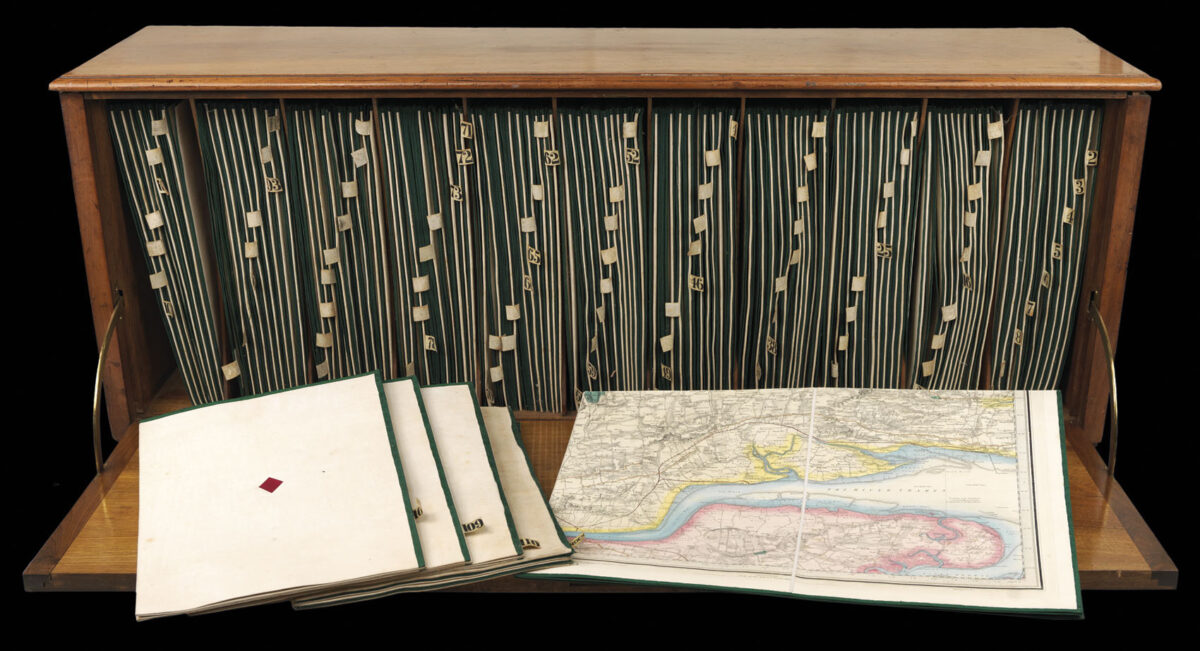 Ordnance Survey of England and Wales, and Part of Scotland.

The traditional foundation date for the Ordnance Survey has often been taken as the 21st of June 1791, when the Third Duke of Richmond, then Master-General of the Ordnance, authorised the purchase, with state funds, of a giant theodolite for £373.70. However, many writers have looked further back to such projects as the military survey of Scotland, which was executed between 1747–1755, and was the first major land survey carried out by the state. One of its surveyors, William Roy (1726–1790), would go on to make proposals in 1763, 1766, and 1783 for an official survey of Great Britain upon a scale of one inch or one and a quarter inches to the mile, however, the cost was seen to be exorbitant. However, Roy was involved in the conception of the Ordnance Survey, when in 1783 the Royal Societies of Paris and London agreed to connect their two great cities by the use of triangulation and so settle the dispute of their relative positions. The English team, headed by Roy, measured a five mile baseline on Hounslow Heath, the start and end of the line of which are commemorated by two upturned cannons. The triangulation, which was completed by 1790, together with the outbreak of war with France in 1793, acted as a catalyst for the surveying of England. Lieutenant Colonel Edward Williams was chosen to direct the works, ably assisted by William Mudge, and Isaac Dolby. They began their work in Kent and by the end of the Napoleonic Wars, in 1815, the majority of southern England had been mapped.

In 1820 Captain Thomas Colby (1784–1852) was put in charge of the survey. It soon became apparent that much of the early surveying work was of insufficient standard. As a result, he ordered the revising of much of the existing survey work, which would take the next 13 years to complete. By 1844, publication of the Old Series, one inch to one mile, was complete for the whole of Britain south of Preston and Hull. The survey now became mired in what would become known as the ​‘Battle of the Scales’. The origin of the debate was borne from the fact that the survey of Ireland, began in the 1820s, was upon a much larger scale of 6 inches to the mile. Many suggested the scale be adopted for northern Britain and Scotland, however, when the larger scale was taken up the progress was painfully slow, and by 1851 only Lancashire and Wigtowshire had been surveyed. This led to a House of Commons Select Committee to suggest the abandonment of the scale; a suggestion that the parsimonious Treasury readily accepted. Even so this did not settle the matter and the debate would rage on for some years to come.

The present set was published around 1870, by which time the whole of England and Wales had been mapped. The maps are all upon a scale of one inch to one mile, and are here housed within a custom-made box, with each of the maps having numbered vellum tags.