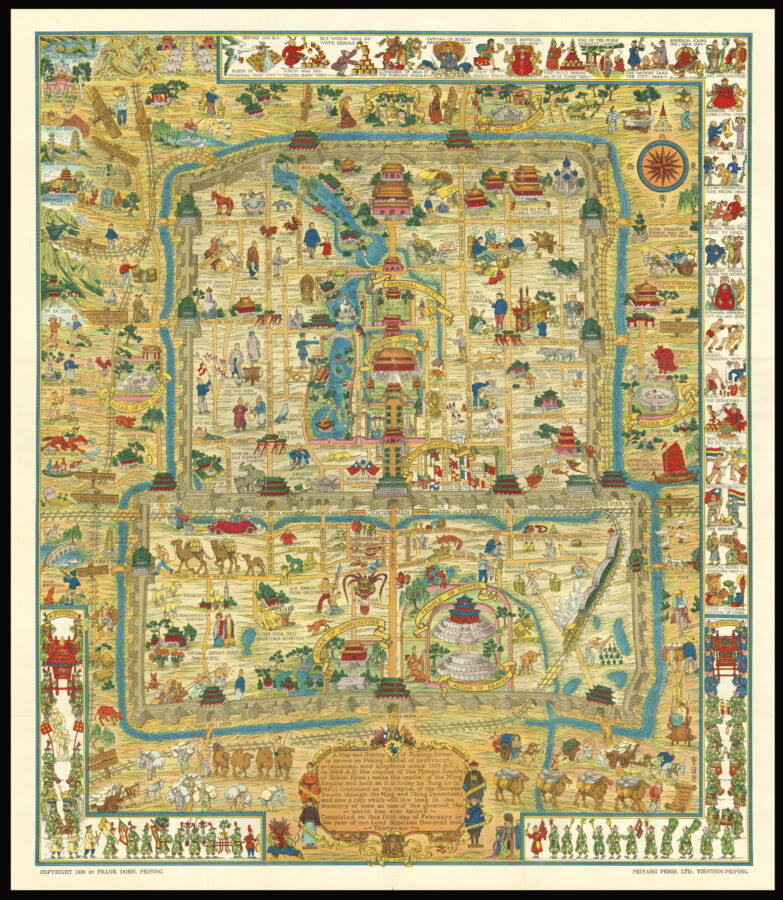 A Map and History of Peiping formerly known as Peking; capital of provinces, princedoms, and kingdoms since 1121 B.C.; in 1264 A.D. the capital of the Mongol Empire of Kublai Khan; made the capital of the Ming Empire and built as it is today by Yung Lo in 1421; continued as the capital of the Chinese Empire through the Ming and Ching Dynasties; and now a city which will live long in the memory of man as one of the greatest the world has ever known. Completed on this fifth day of February in the year of our Lord Nineteen Hundred and Thirty-six.

Decorative and detailed plan of Beijing.

The plan is packed full of wonderful illustrations, from the border that covers the city’s history from its inception in 1100B.C., its numerous dynasties — including the ​‘decadant period under the Ch’Ings’ — through to the revolution of 1911 and the movement of the capital to Nanking in 1927. Also to the borders are illustrations of a wedding and a funeral. The plan itself not only shows all the historic landmarks, including the Forbidden City, and the Temple and Altar of Heaven but also the racecourse, zoo, old execution ground, and cocks fighting. The map is accompanied by a 22 page booklet which gives a potted history of the city together with a list of points of interest that are shown on the map.

Frank Dorn (1901–1981) was an American artist, writer and military officer. His military service took Dorn firstly to the Philippines were he produced his first pictorial map of the military Camp Strassenbourg. While living in China and serving as a junior military attaché in the 1930s, Dorn made his popular pictorial map of ​“Peiping” (now Beijing). He later served in the field as advisor to a Chinese army. A fluent speaker of Chinese, Dorn’s most important military role was in the China-Burma-India theatre during World War II. He retired from the U.S. military in 1953 having reached the rank of Brigadier-General.