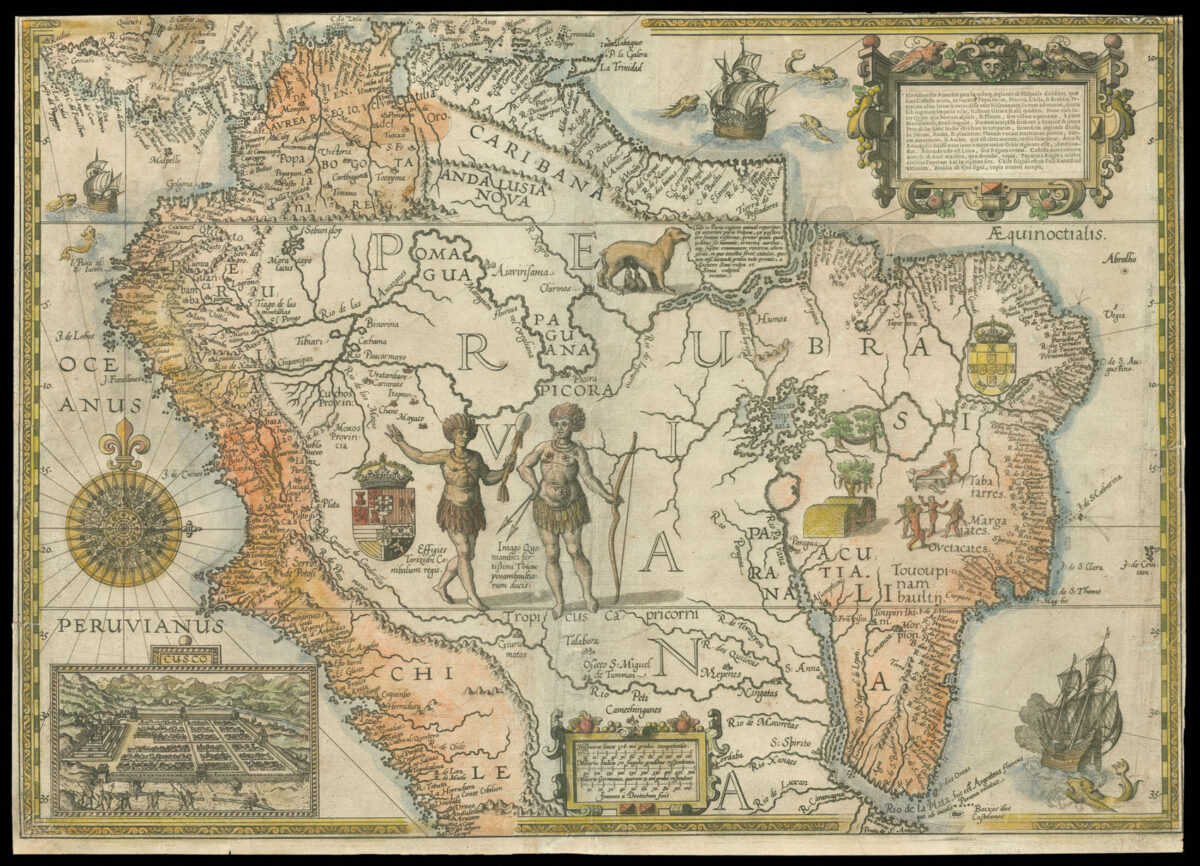 In the upper right corner, a text printed on a strip of paper is pasted into a Renaissance cartouche. The text gives a brief description of the area depicted (in translation):

​‘A part of South America is divided by the Spaniards into five regions, the Golden Castles, as they call it, Popeianum, Peru, Chili, and Brazil. Girava and some others write that at one time, before the Spaniards arrived, Peru stretched much further when it was under the government of the Incas. Now it lies constrained between Quito in the north and Plata or the City of Silver in the south. It has been written that the country was named after a priest an poet whose name was Peru. They now divide the country into three parts according to the location of each, the Sierra, the Andes, and the Plains. The Plains are the strip along the sea, the Sierra is the mountainous area, and the region to the east of the mountains is called the Andes. It is absolutely certain that the country has more riches in terms of gold and emeralds than any other country in the world. The capital is Lima, or the city of kings. Golden Castles got its name from the extremely large supply of gold with which it is overflowing. The land Popeianum is named after the famous city of Popaja that lies in the area. Chili is cold because of its proximity to the South Pole. Brazil owes its name to its wealth in timber’. On the map itself, the whole area that is depicted bears the name PERUANA in very large capital letters.

Centred along the lower edge, a cartouche contains scale bars in three types of miles. Underneath, the name of the engraver is mentioned: Ioannes à Doetechum fecit. An inset in the lower left corner shows the Peruvian capital of Cusco as a bird’s eye view. The source for that view was the depiction of this city in the first part of Braun and Hogenberg’s ​‘Civitates Orbis Terrarum’ (1572). The oceans and seas are decorated with ships and fish; there is a large compass rose in the Pacific Ocean (OCEANUS PERUVIANUS). A number of decorations are found in the interior, including the coats of arms of Portugal and Spain. Noteworthy is the drawing of two native rulers, accompanied by the following comments: ​‘Depiection of Tarazichus, the king of the cannibals’ and ​‘Depiction of Quiniambecus, the very brave leader of the Tououpinambaultiers’. These drawings and other scenes depicting the life of native cannibal tribes in Brazil are taken from Theodore de Bry’s ​‘Grands Voyages’. The picture of a strange mammal is explained as follows: ​‘Such a best is found in the region of Paria. From the front it is a fox, from behind a monkey, except that it has human feet and the ears of a night owl and that above the usual belly it has a second belly, wherein it nurtures its delicate young, which it only takes out to suckle. Gesner calls it monkey-fox or fox monkey.’ This is in fact the description of an opossum.

The map extends from the Mosquito Gulf in Central America and the Leeward Islands in the north to the mouth of the Rio de la Plata in the south. The way the coasts and the network of rivers are drawn shows a strong resemblance to the surviving maps of Bartolomeu Lasso which are kept in Hatfield House and in Paris. Hundreds of toponyms are engraved along the coasts. However, the possibilities for exploration inland are limited by the natural setting. The only possible way to explore the interior to the east of the Andes was to follow the rivers. The map images is dominated by the immense river systems of the Amazon and the Rio de la Plata (the Orinoco is not yet clearly indicated). Both rivers originate in the Andes range and flow to the Atlantic Ocean. They are among the longest fluvial systems in the world.