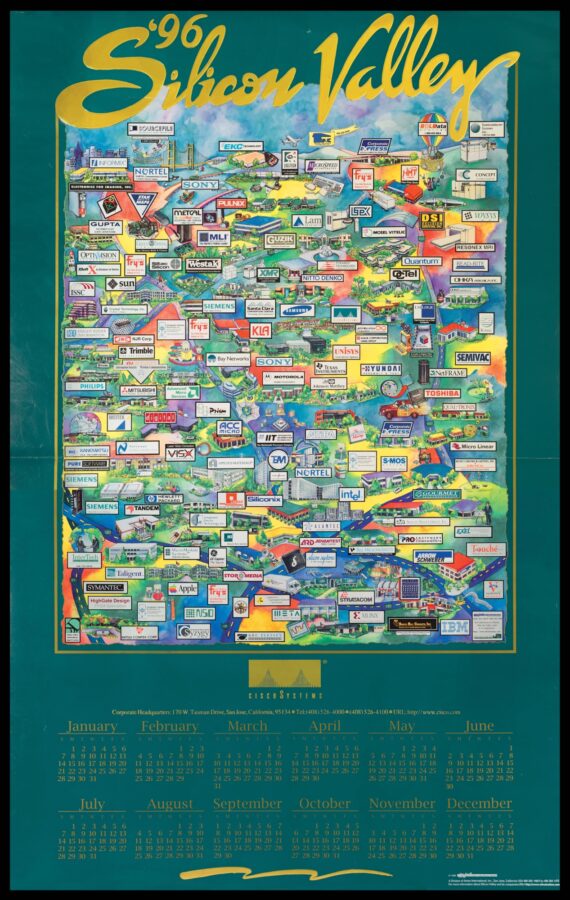 A colourful poster illustrated with a map of Silicon Valley, showing the locations of major technology companies and what their offices looked like.

Published in 1995, with a calendar for the following year, this map was made during a pivotal time in the technology industry, when commercial use of the internet started to become widespread. Consequently, 1995 was the beginning of a surge of internet startups, many of which followed their software predecessors to Silicon Valley. Cisco Systems, the company that commissioned this map, was one of Silicon Valley’s companies that caught the internet wave at its crest.

Cisco was founded in 1984 by Sandy Lerner and Leonard Bosack. The company’s name is derived from nearby San Francisco, and their logo represents the Golden Gate Bridge. The company’s first product was a close adaptation of the Stanford computer network’s router, copying both its software and hardware, that they called Cisco IOS. It was released in 1986, but not without Stanford contemplating filing charges. The problem was resolved in 1987, when Cisco agreed to lease the relevant intellectual property. Cisco systems went public in 1990, at which point the founders walked away. The company’s success during the 90’s lay in their production of the first commercially successful network router. This allowed for great advances in corporate communications — for example, a company’s headquarters could connect seamlessly with its far-flung branch offices. In 1995, John Chambers became the CEO of Cisco Systems, and he ushered the company into its heyday. Among other products, Cisco held a de facto monopoly on the GSR router, which was vital to internet service providers. Cisco’s control of this critical segment of the internet industry allowed them, in March 2000, to surpass Microsoft as the most valuable company in the world, with a market capitalisation of over 500 billion dollars. However, Cisco was trading at around 240 times its earnings, and their overly high valuation was not sustainable. When the dot-com bubble burst in 2001, Cisco’s valuation plunged, becoming a cautionary tale for all of Silicon Valley. However, Cisco survived the crash, and the company is still active today.

We have been unable to locate a copy of this poster an institutional collection.