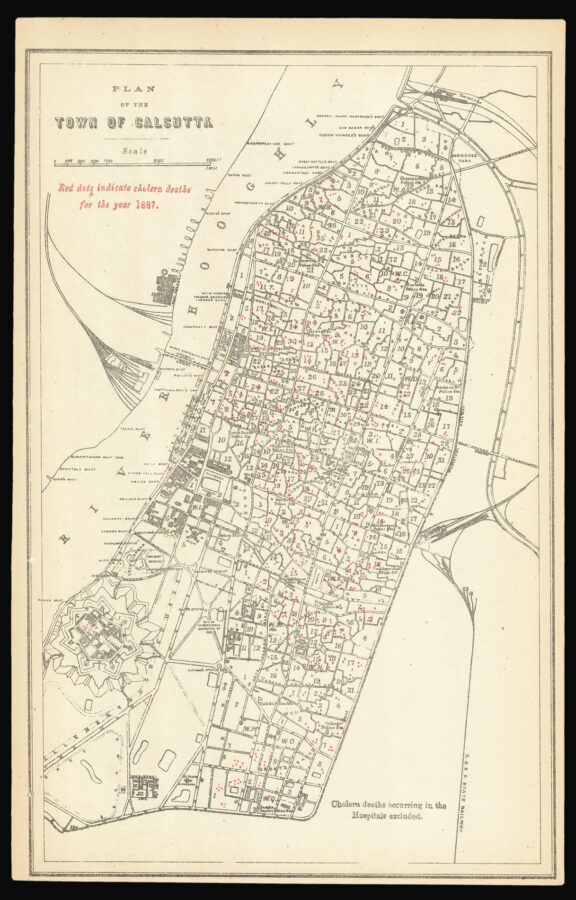 Plan of the Town of Calcutta. Red dots indicate cholera deaths for the year 1887.

Rare Cholera map showing the outbreak of the disease across the city of Kolkata in 1887.

The nineteenth century had seen a much greater use of cartography in order to track and chart the spread of infectious diseases, especially cholera, which had seen two pandemics break out between 1817–1824, and 1829–1851. Both cholera pandemics had originated in India, most probably around the Ganges delta. The first pandemic consumed much of Asia, reaching as far as Syria in the west and Japan in the east. The second outbreak spread much further and included much of Russia, Europe, and parts of the Americas. Cholera would throughout the nineteenth century cause more deaths more quickly, than any other epidemic disease. Some three years after the end of the second pandemic, John Snow would publish the second edition of his seminal work: ​‘On the Mode of Communication of Cholera’, which incorporated his work on the Soho epidemic (item ).

Cholera was first recorded in Jessore, Bengal, near Kolkata, in 1817. The local conditions were ideal for the epidemic, as the region was densely populated, with a moist, tropical climate, while sanitary conditions were often lax. Cholera lingered around Calcutta constantly throughout the rest of nineteenth Century, occasionally spiking into severe outbreaks. The year 1887 was not an especially bad year for cholera in Calcutta, although, as the map shows, the ​‘normal’ situation was still quite grim. A note to the bottom right of the plan states: ​“cholera deaths occurring in the Hospitals excluded”; their inclusion would have obviously have skewed the overall picture, of the disease generally even spread throughout the city. Kolkata’s medical department worked ceaselessly to stamp out the disease, but did not make transformative headway until the early 20th Century.

The present map was obviously extracted from a medical report or pamphlet, issued in Calcutta, although we have not been able to trace the identity of this publication. Cholera maps printed in India are very rare, and the present map is fine example. 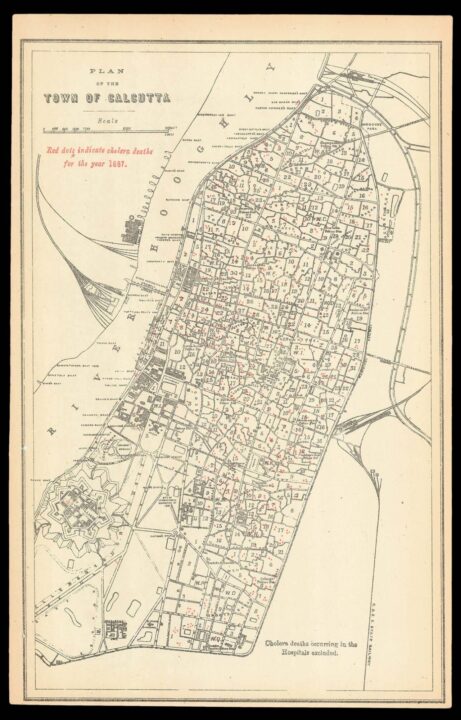