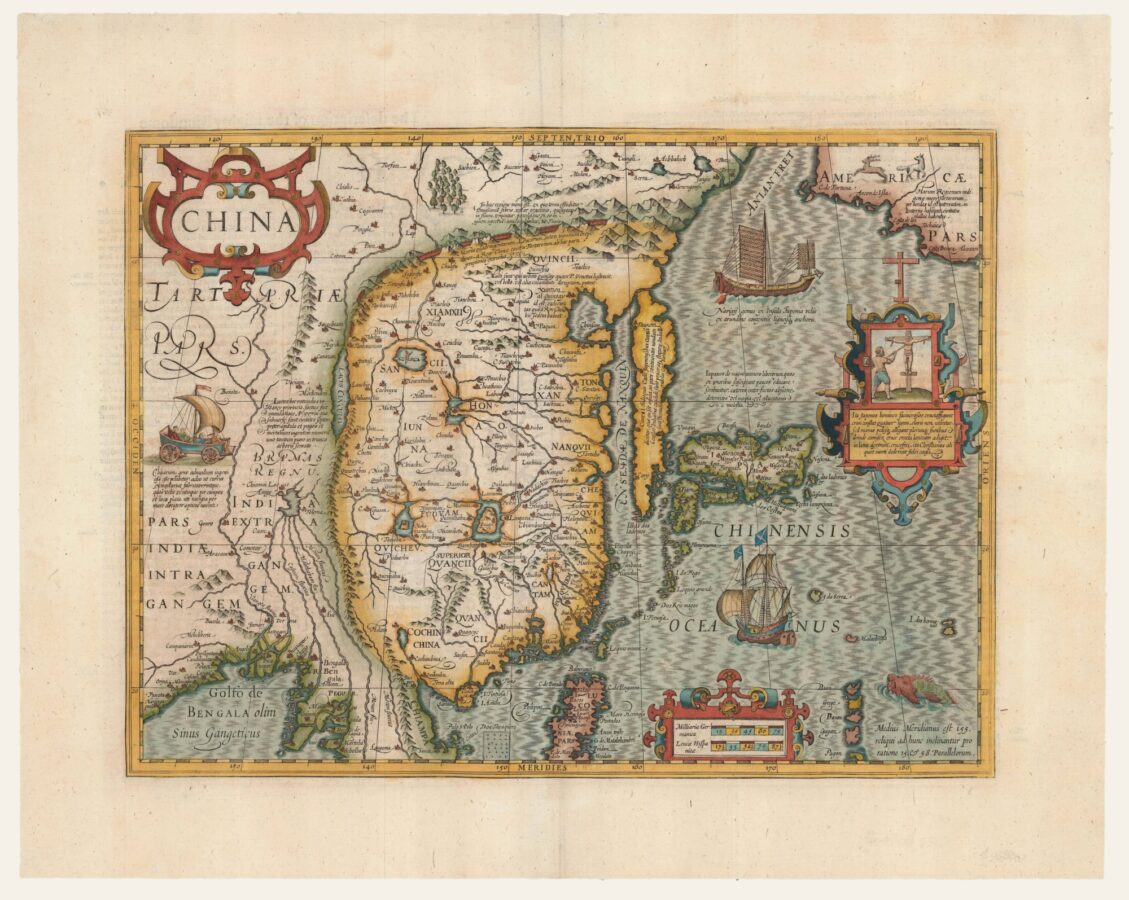 China by Mercator/​Hondius 1636, the only English text edition

A map of China from the 1636 English edition of the Hondius-Mercator ​‘Atlas’.

China is somewhat condensed, and Japan (drawn after Luis Teixeira) is similarly misshapen. Korea is shown as an island. The Great Wall is shown in the north of China, and to the left is an illustration of a Chinese windboat. The mythical Strait of Anian is shown between Asia and America, with a section of the northwest American coast visible, inhabited by a deer and a wolf. Two ships, one similar to a Chinese junk and the other European, patrol the Pacific Ocean. In a decorative cartouche there is a description and illustration of a Japanese crucifixion, a practice introduced into Japan in the early modern period, and possibly inspired by the martyrdoms in Nagasaki in 1597.

For nearly sixty years Gerard Mercator was the supreme cartographer, his name, second only to Ptolemy, is synonymous with the form of map projection still in use today.

The first two sections of his world ​‘Atlas’ were published in Antwerp 1585 and 1589 and the third (with the first two making a complete edition) published in 1595. After his death Jodocus Hondius, one of the most notable cartographers, engravers and publishers at the end of the 16th Century, continued to publish his World Atlas.

This decorative and fascinating map with ​‘silk effect’ engraving to the sea, shows Korea as an Island. Amongst the decorative features a sea monster, Dutch and Chinese ships and a wind-blown land vehicle can be seen, as well as the cartouche depicting the ​‘manner of execution’ used at that time.

The text on the reverse of the map is in English. This map is from the scarce, sole English text edition of the Atlas, published in 1636. It describes the climate, national features, inhabitants and economy of China:

​“In every mechanick art, and manufacture they are so exceeding skilful and cunning, that their workemanship seemeth rather to be made by nature, then by the hand of man. The Portugalls report many strange things of the subtilitie of their spirits, among the rest, which is most to be wondered at, they have wind-chariots or wagens with sailes and knowe how to steere and governe them with such dexteritie, that in a short time they can carrie themselves where they please.”