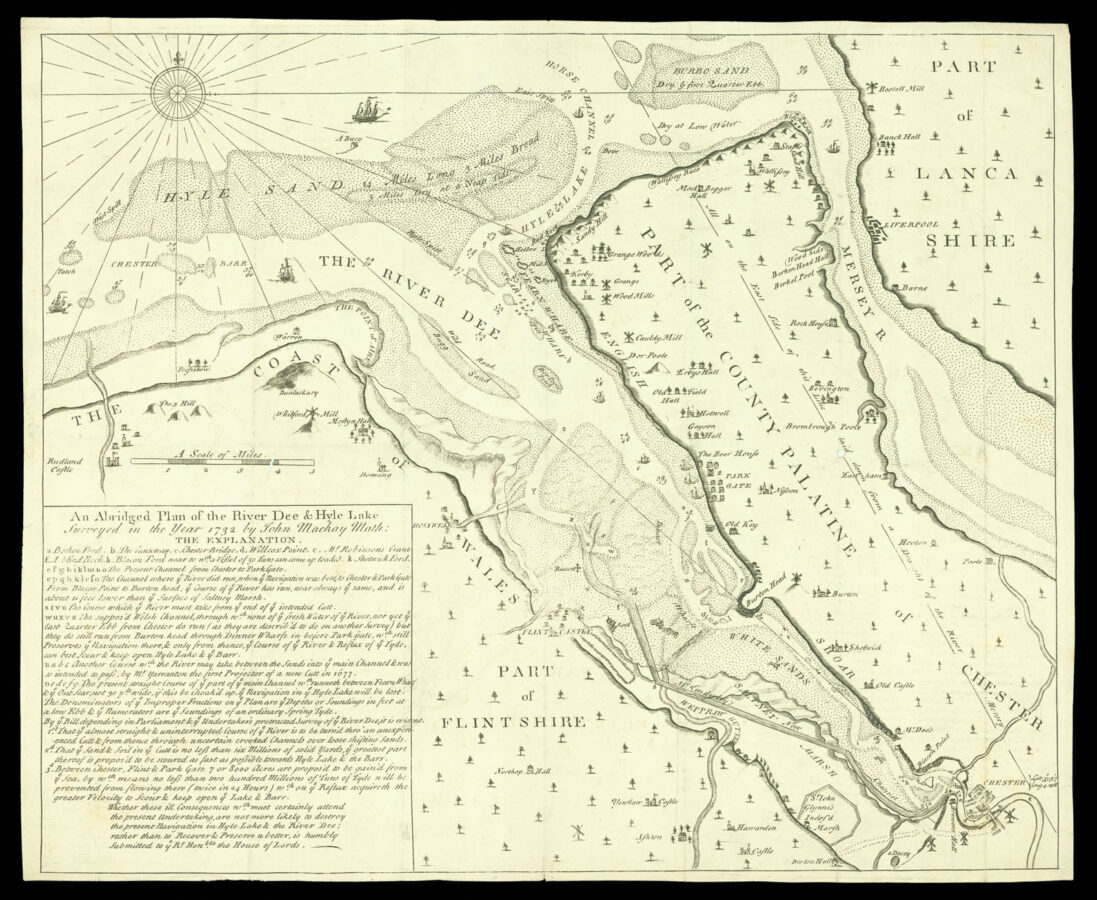 [Cheshire] An Abridged Plan of the River Dee & Hyle Lake Surveyed in the Year 1732 by John Mackay Math:

Almost nothing is known about John Mackay beyond the small number of surveys that he completed; he was a mathematician and surveyor, with a father of the same name and profession, with whom he surveyed the Parish of St. George’s Hanover Square in 1725, both describing themselves as of the Parish of St. James’s Westminster. Alexander Gordon’s Itinerarium Septentrionale: or, a journey thro’ most of the Counties of Scotland, and those in the North of England … (London, 1726) contains a map by a John Mackay, entitled ‘.… This Map shewing the situation of the principal Roman Camps Forts, Walls, etc. between ye River Tyne in England & the Tay in Scotland .…’ which might be by one of the pair.

This rare chart of the mouth of the River Dee was prepared in opposition to A Bill to Recover and Preserve the Navigation of the River Dee, in the County Palatine of Chester, 11 June 1732 …; the chart marks ​‘Mr. Kindersley’s New Channel’, which crosses ​‘SALTNEY MARSH’ from ​‘THE RIVER DEE’ to ​‘CHESTER’. There is a dividing line laid across the Wirral with the note ​‘All on the East Side of this Line is laid down from a Draught of the River Mersey’.

The proposal was for a new cut or channel to be built through Saltney Marsh, which would mean that the marine approach to Chester would follow the southern (Welsh) coast rather than the then northerly approach.

It is likely that the chart was commissioned by the Chester Cheesemongers, to accompany The Case of the Cheesemongers, in and about the Cities of London and Westminster, relating to the Bill to recover and preserve the Navigation of the River Dee, in the County of Chester; the Cheesemongers conducted their trade through the port of ​‘PARK GATE’ on the northerly approach, and they feared this route would become silted up by the new works. In this broadside, they claimed that cheese exports from Parkgate accounted for nine-tenths of Chester’s exports; the lengthy explanatory text on this chart concludes:
”… By ye Bill depending in Parliament & ye Undertaker’s protracted Survey of ye River Dee, it is evident, 1st That ye almost straight & uninterrupted Course of ye River is to be turn’d thro’ an unexperienced Cutt & from thence through uncertain crooked Channels over loose shifting Sands. … Whether these ill Consequences w[hi]ch. must certainly attend the present Undertaking, are not more likely to destroy the present Navigation in Hyle Lake & the River Dee; rather than to Recover and Preserve a better, is humbly Submitted to ye Right Hon[oura]ble. the House of Lords.“

The opposing view was expressed in The Case of the Inhabitants of the County and City of Chester, Petitioners for the Bill to Recover and Preserve the Navigation of the River Dee; in answer to the Petition of the Cheesemongers …, and it was this view that won out. The Act was duly passed, and in 1737 a new canal, the New Cut, was completed from Chester, taking the course of the river below Chester to the Welsh side rather than English side of the estuary as before.