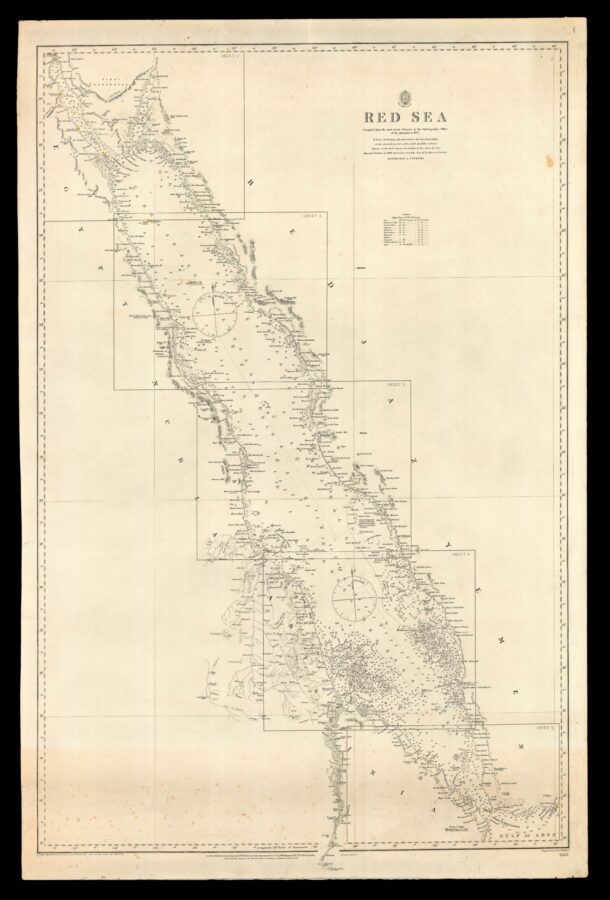 The Red Sea Compiled from the most recent Surveys in the Hydrographic Office of the Admiralty, to 1877.

This rare chart of the Red Sea is the result of the perilous surveying voyages undertaken by the sailors of the Indian Navy. In order to chart the dangerous waters of the Red Sea, a two-ship hydrographic expedition was launched under Captain Thomas Elwon and Commander Robert Moresby in 1829. Over the course of the following three years, the teams aboard the Palinurus and Benares surveyed the coastline and waters to ensure that the route from Europe to the East Indies was viable for new steam vessels. The diaries kept by crew members offer direct insight into their experiences in the Red Sea. As well as geographical and navigatory details, such as anchorages, fuel supplies and obstacles, these journals tell of the diseases that plagued both ships. One of the principal assistants in the task, Lieutenant Pinching, actually died in the sweltering African climate and was buried on the land off of the Gulf of Aden, shown in the lower right corner of the chart. More happily, Moresby’s own diary celebrates the abundance of the mainland, where ​“provisions were plentiful and good—oranges, pears, apples, plums in season. And there were plenty of fine cabbages!”. Also recorded are the techniques used in the surveying itself, which included using local boats and pilots to chart dangerous coastal areas, and on one occasion, Moresby is said to have sprung up the rigging to confirm that a distant mass was actually a reef.

The charts produced from this surveying expedition proved of great importance throughout the rest of the nineteenth century, to such an extent that in his work, ​‘First Footsteps in East Africa’, the explorer Richard Burton, states that they ​“will ever remain permanent monuments of Indian Naval Science, and the daring of its officers and men”. The present chart shows depth with isolines and soundings, relief with hachures and spot heights, and identifies key features such as lighthouses and harbours.

The chart has been extensively updated from its 1857 printing, with the chart now a key sheet for five larger more detailed chart. Although numerous soundings have been added, together with a tide table, the most dramatic addition has been the depiction of the route of the British Army from the Gulf of Zula on the Ethiopian hill top fort of Magdala, during the Abyssinian expedition of 1868.

The military operation was in response to Emperor Tewodros II taking a group of English missionaries hostage, following his demand for British military assistance being rejected. The march to Magdala would take two months, and the ensuing battle would see the defeat of the Abyssinia army, and the suicide of Tewodros.

The imprint in the lower right corner identifies the engraving of this chart as the work of John and Charles Walker. Walker Cartographers had been responsible for naval charts since the British Hydrographic Office was established in the late eighteenth century, and subsequently produced numerous charts of the colonies.