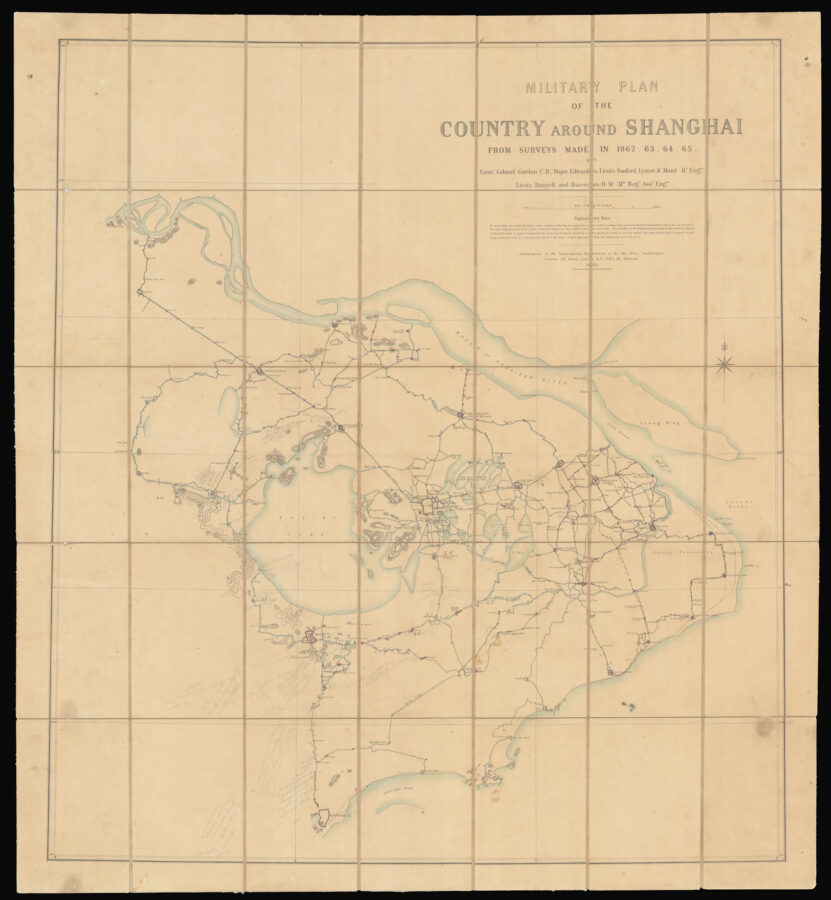 Case map of Shanghai, China, and vicinity by ​“Chinese Gordon”

The earliest serious British attempt to map the area around Shanghai, China. Surveyed by ​‘Chinese Gordon’ during the Taiping Rebellion.

An extremely rare map depicting Shanghai and her enivrons. The map, by British military officer Charles George Gordon (or ​‘Chinese Gordon’), covers from the mouth of the Yangtze River south to the Tsien Tan River (Fushun River), Hangchao (Hangzhou), and from Ching Keang (Zhenjiang) to the Tunsha Banks, including all of the country in between, the Grand Canal, Shanghai, Soo Chow (Suzhou), Tai-Hu Lake (Tai Lake), and Hoo Chow (Huzhou).

The map was produced by Gordon whilst he was leading the Qing ​‘Ever Victorious Army’ against the Taiping rebels between 1862 and 1865. The manuscript plan drafted by Lieutenant Colonel Charles George Gordon and his Chinese assistants apparently covered an area of over 80 square metres. Following the defeat of the Taiping Rebellion in 1864, the map was zincographed at the Topographical Department of the War Office in Southampton, then under the direction of Colonel Henry James. This enormous map was, in turn, reissued in the same year, the present example, on a reduced scale by Edward Stanford. Although the British had been present in this area for some time, Gordon’s map, surveyed to facilitate his campaigns during the rebellion, represents the first focused British survey of the Shanghai region.

Gordon would go on to be highly decorated by both the Chinese and British authorities, he would later enter the service of the Khedive of Egypt, and would become the Governor General of the Sudan, where he did much to suppress revolts and the local slave trade. He returned to Europe in 1880.

A serious revolt then broke out in the Sudan, led by a Muslim religious leader and self-proclaimed Mahdi, Muhammad Ahmad. In early 1884 Gordon had been sent to Khartoum with instructions to secure the evacuation of loyal soldiers and civilians and to depart with them. In defiance of those instructions, after evacuating about 2,500 civilians he retained a smaller group of soldiers and non-military men. In the build up to battle, the two leaders corresponded, each attempting to convert the other to his faith, but neither would accede.

Besieged by the Mahdi’s forces, Gordon organised a citywide defence lasting almost a year that gained him the admiration of the British public, but not of the government, which had wished him not to become entrenched. Only when public pressure to act had become irresistible did the government, with reluctance, send a relief force. It arrived two days after the city had fallen and Gordon had been killed.

Rare. OCLC records only two institutional examples: The Essex Peabody; and the National Library of Australia.