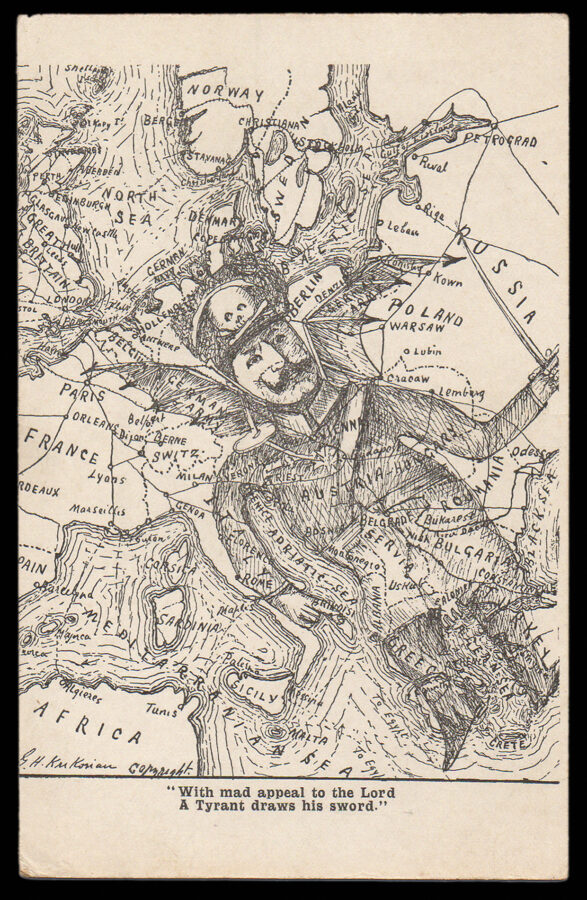 A propaganda postcard with a map of Europe. Most of eastern Europe is covered by the figure of the heavily moustachioed Kaiser, wearing a shako with the Totenkopf (death’s head) insignia used by the German Hussars and sprouting a pair of devilish wings from his back. His body covers Germany and Austria-Hungary, with his arm stretching down the Italian peninsula, signifying the Triple Alliance signed between those three countries in 1882. The caption is taken from the first verse of a poem by Horace Annesley Vachell, ​‘This Day’, published in the Daily Mail in 1914 after the outbreak of war:

Sons of our sea-girt isle!
The battle-tide’s at flood!
With mad appeal to the Lord
A Tyrant draws his sword
A monarch of discord,
A king of iron and Blood!

The tyrant is the Kaiser; the phrase ​‘iron and Blood’ refers to his Chancellor Otto von Bismarck’s famous speech of 1862, which proclaimed that Germany’s aims could be achieved only though ​‘Blute und Eisen’. In early August 1914, Germany had declared war on Russia and France; after Germany invaded neutral Belgium, Great Britain declared war on Germany, and both Britain and France declared war on Austria-Hungary later that month. The left wing of the Kaiser extends into Belgium, signifying the invasion; the right wing extends into Poland, which was divided between Austria-Hungary, Germany and Britain’s ally Russia.