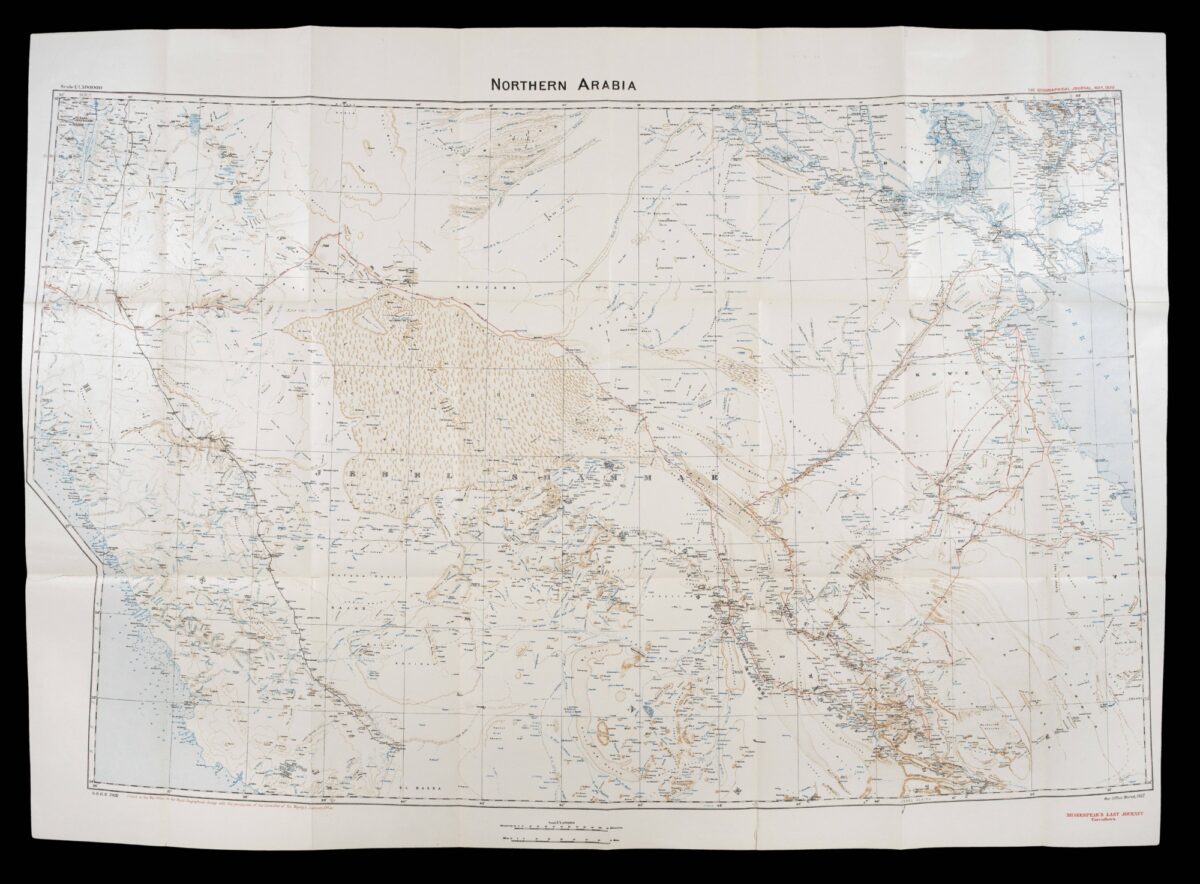 British explorer, naturalist and cartographer, Alexander Douglas Mitchell Carruthers (1882–1962), travelled widely throughout the early twentieth century. After studying at Cambridge, he became a secretary to the scholars of the Royal Geographical Society, and thereby came to train as a surveyor. His marriage in 1815 seems to have put an end to his explorations abroad, as from then on Carruthers dedicated himself to compiling maps of the Middle East for the War Office in London. In this role, he worked with cartographic information provided from important contemporary figures including Gertrude. Bell, Harry St. John Bridgen Philby, T.E. Lawrence and Captain William Shakespear.

The latter, who was the first European to map large swathes of the Arabian interior, is credited on the present chart. The tracks of his final journey are shown and overprinted notations in red highlight his achievements. Shakespear was a key link between the British authorities and the al Sau: in fact he was the one to arrange the first ever photograph of Ibn Saud, who would soon become King of Arabia.

Britain’s keen interest in consolidating its relationship with the Middle East is evidenced by the cartographical effort it sponsored in the region during the 1920s. The Royal Geographical Society commissioned numerous surveys of the Levant and Arabian Peninsula during this time, including the present map, which extends from the Mediterranean in the west to the ​“Persian Gulf” in the east.

It is a highly detailed piece of cartography, presenting towns, cities, roads and railways in black, lakes, rivers and wadis in blue, and desert areas in brown, with the Nefud Desert and its prominent dunes occupying the centre of the map. Many mountains are labelled, with contour lines to represent relief. The Jaffa-Jerusalem section of the Hejaz Railway is shown, running through Amman in the north and extending south towards Medina. Although intended to extend all the way to Mecca, efforts to complete the railway were hampered by the First World War.