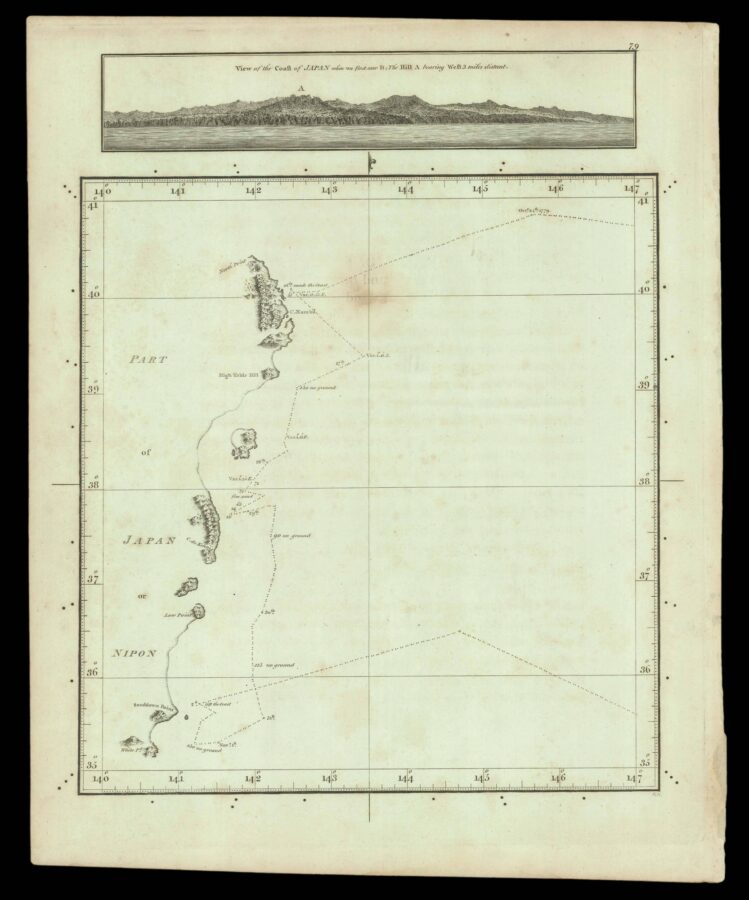 View of the Coast of Japan when we first saw It; The Hill A bearing West 3 miles distant.

A map of the coast of Japan.

Captain James Cook made three major voyages to the Pacific. The first voyage, with HMS Endeavour, from 1768–1771, was ostensibly made to observe the Transit of Venus, but also to search for the mythical Great Southern Continent supposed to lie somewhere between New Holland and South America. Cook became the first European to set foot on New Zealand, and named the land New South Wales. During the second voyage, with HMS Resolution and Adventure, from 1772–1775, Cook made the first crossing of the Antarctic Circle. In his third and final voyage, with HMS Resolution and Discovery, from 1776–1780, Cook became the first European to discover Hawaii and showed that there was no navigable northern passage from the Atlantic to the Pacific. He died during a skirmish with natives in Hawaii.

During the third voyage, the Resolution and Adventure sailed along the coast of Japan on their return journey.

Cook’s journals were published after each voyage. This map is from the second edition of the journals of his third voyage, ​‘A Voyage to the Pacific Ocean’, first published in 1784.

Captain James Cook was a British explorer, navigator and cartographer in the Royal Navy. At the outbreak of the Seven Year’s War in 1755, he volunteered for service in the Royal Navy, and was posted to HMS Eagle. After passing his master’s examination two years later, he served as master of the Pembroke, participating in the naval bombardment of the Fortress of Louisbourg and the siege of Quebec. He showed a talent for surveying and cartography early on, and mapped the coast of Newfoundland in the 1760s aboard HMS Grenville. He produced the first large scale and accurate maps of the area, which were also the first scientific, large scale hydrographic surveys to use precise triangulation to establish land outlines.