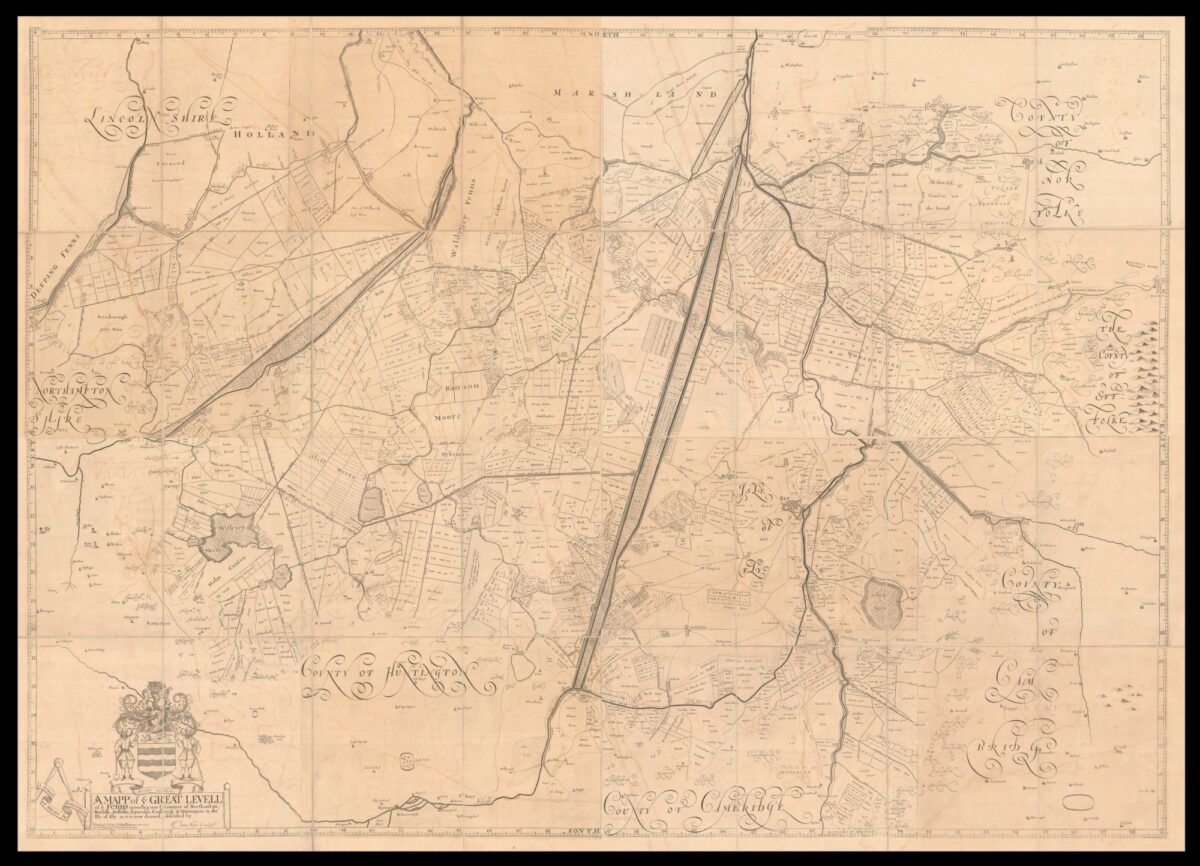 Cambridgeshire — The draining of the Fenns

[Cambridgeshire] A Mapp of ye Great Levell of ye Fenns extending into ye Countyes of Northampton, Norfolk, Suffolke, Lyncolne, Cambridg & Huntington & the Isle of Ely as it is now drained.

Below the map to the left is the coat-of-arms of the Bedford Level Company. The company was set up in 1630, when the 4th Earl of Bedford contracted with a number of landowners to drain the area of the southern Fen afterwards known as the Bedford Level. The Bedford Level Company was incorporated in 1634 and contracted with Vermuyden to perform the necessary works. These works were deemed to be ​“complete” at a meeting held in St. Ives in 1636, but in fact much remained to be done, and the St. Ives decision was set aside in 1638. There was a revival of interest after the Civil War, promoted this time by the 5th Earl (later Duke) of Bedford, and Vermuyden was again appointed Director of the Works. The levels to the north west of the Bedford Level were adjudicated drained in 1651 and those in the South Level likewise in 1652.

In 1654, the company gave leave to Jonas Moore to print and publish a map of the area. Only one copy of the first edition printed in 1658 remains, that in the National Archives (MPC 1/88). In 1677, Moore was asked to reprint the map, correcting various faults; there is also a note regarding the buying ​“of his old plates”. This edition, by Moses Pitt, appeared in 1684, and likewise there is only one known copy, in the Bodleian Library (Gough Maps Cambridgeshire 2). A third version was printed by Christopher Browne and dated 1706, and two final issues: one in 1824, bearing the watermark ​‘S&A 1824’, and the present copy, also dated by its watermark, to 1836.

Carroll states that ​“the very first large scale map of England was not of a county but the Fens — mapped by Jonas Moore and published on sixteen sheets.” The map is very rare and, being on a scale of 2 inches to one mile, astonishingly detailed — it not only shows each plot of land, but in some cases the owner’s name as well.