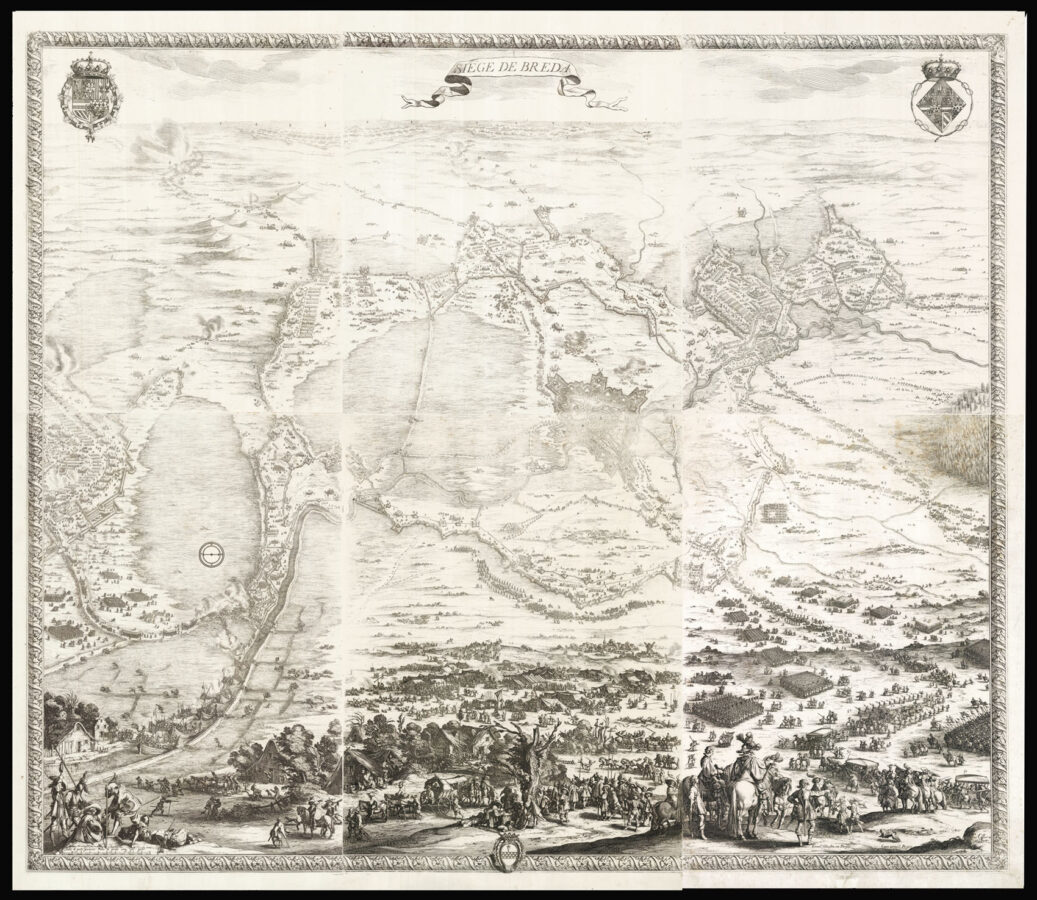 Callot’s monumental depiction of the 1624 siege of Breda

Large plan on six sheets depicting the 1624 Spanish siege of Breda, during the Eighty Years War.

​“The Siege of Breda, probably Callot’s most ambitious military commission, is composed of six etched plates which fit together to form the image. The UAG owns only the bottom center and the bottom right portions. Ambrogio de Spinola, the Commander-in-Chief of the Spanish forces in the Netherlands, laid siege to the strategic city of Breda in August, 1624. Located in Northern Brabant, Breda, which protected the roads to Utrecht and Amsterdam, was an enclave of the United Provinces in the Spanish Netherlands. Breda surrended to Spain on June 5, 1625 and a few days later the Infanta Isabella Clara Eugenia, who became the regent of the Spanish Netherlands at the death of her husband in 1621, triumphantly entered the city. This siege fascinated Europe; the gazettes of the time carried weekly updates and dignitaries such as the Prince of Poland and the Duke of Bavaria visited the site.

Callot received this prestigious commission from the Infanta Isabella who paid him 850 ecus. His name may have been suggested to the Infanta by his Florentine friends Giovanni de’ Medici and Giovanni Francesco Cantagallina, who, as military engineers, played an important role in the siege. At the beginning of February 1626, Callot returned to Nancy with the necessary documents to execute the commission, although it is not documented that Callot actually went to Breda.

According to the commission, 200 impressions of Callot’s Siege of Breda as well as 200 separate explanatory booklets were printed by the Plantin-Moretus press in Antwerp in 1628. Because of the accompanying booklet, the print did not incorporate an explanatory legend, which did not please Callot. As a result, he commissioned the same publisher to print another edition of his Siege of Breda with the legend joined to the image in Spanish, French, Italian and Latin. The correspondence between Callot and his publisher, most of which is now in the Plantin-Moretus Museum in Antwerp, indicates that the new impressions were ready around July 1628. Callot ordered 1,825 impressions of the new edition, a surprisingly high number. It is unclear what he did with these prints or how successful he was in selling them, but it underscores the interest which this event held for Callot’s contemporaries.

Callot’s etching is a synoptic view of the siege, a juxtaposition of events which took place throughout its eleven-month duration. On the right side of the print, Callot shows the Infanta Isabella and her entourage moving toward the city and her triumphant entry on June 12. Each event or geographical element is carefully inscribed with a number or a letter, like the number 52 on the Infanta’s carriage, which is explained in the legend. Some major protagonists, like Spinola, the Commander-in-Chief of the Spanish forces, appear several times. He appears as a rider on the right of the Infanta’s carriage and again holding the baton of command in the right foreground. Certain elements, such as the movements of Spinola’s armies on the top portion of the print, are accurate, but the visualization of the encampments in the lower center is largely imaginary.

The goal of this project was to emphasize the accomplishments of the military engineers and, in a sense, to justify the enormous human and financial resources expended on the siege. It should be noted that the King of Spain in Madrid opposed the siege but the Government of the Spanish Netherlands in Brussels saw the capture of Breda as essential to the maintenance of its political power.” (Anne Bertrand)

The present example is the second state with title in banderole.