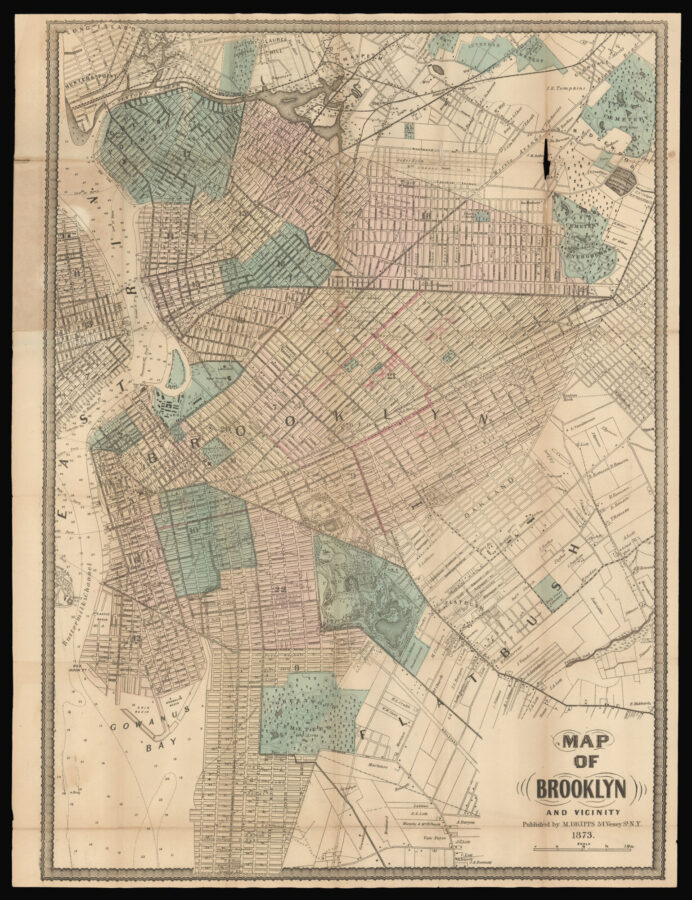 Brooklyn as the third largest city in the United States

Map of Brooklyn and Vicinity.

Dripps’ first map dedicated to Brooklyn was published in 1864. Between then and when he published the current map nearly ten years later, the third largest city in the United States, as it was then, had grown exponentially in terms of both population and geography. In 1873 Brooklyn extends north to Newtown Creek, east and southeast to Flatbush, south to 59th Street, and is bounded by the Buttermilk Canal and the East River to the West. Wards are colour-coded and numbered, with the location of XXI, XXIII, XXIV and XXV being overstamped as subdivisions of the old 21st ward, which contained Bedford. It would be another 25 years before Brooklyn extended to include all of Kings County, and was annexed as a borough of New York.

The map is extremely detailed, with all major and minor road and rail routes outlined and complemented by a myriad of ferry routes that connect Long Island to Manhattan and the mainland. The ghostly outline of the future Brooklyn Bridge, which was under construction from 1869, is a testament to the increasing number of commuters into Manhattan. Real estate ownership is meticulously recorded for all plots, large and small. Green spaces, including the relatively newly designated Prospect Park, are colour coded.

Dripps is perhaps best known for his large and similarly detailed wall-map ‘…of the City of New York Extending Northward to Fiftieth Street’, 1851, which was the first to show all real estate plots and is the forerunner of the lareg-scale fire insurance maps of Sanbourne, and Bromley of the late nineteenth and early twentieth centuries.

Matthew Dripps emigrated to Philadelphia in 1843, from Belfast in Ireland (Philadelphia, A History of The City And Its People: A Record Of 225 Years, Volume IV Biographical, Pages 258–261. Matthew Dripps Family). He ​“was an unlikely man to stand at the beginning of such an important phase of New York mapping. An immigrant grocer with no training in geography, he established his map business one year after disembarking in America from Ireland” (Cohen & Augustyn, Manhattan in Maps, pps. 124–27).